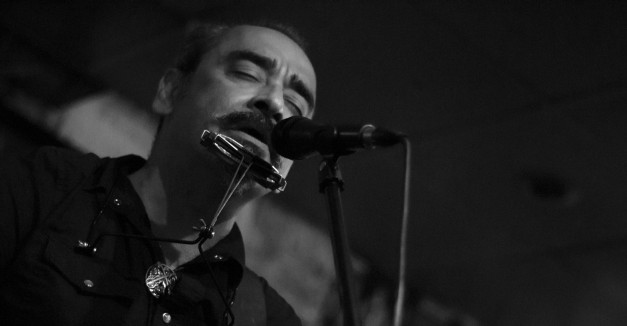 Carrying on the recent Lincoln pattern (like Green Trees and Halfwit) of releasing music online with little incident, Mezcal Brothers bandleader Gerardo Meza released some 20 demos on his SoundCloud over the weekend. Side note: While releasing music unannounced is a fun surprise, on our end, we can do more for musicians if you give us some notice. We want to help you promote.

The unpolished recording quality fits all the better for Meza’s lone voice, some distant reverberating harmonica and haunting lyrics.

Meza noted he also has a solo LP forthcoming, likely on Sower Records. Meza has been rolling out his husky solo folk in Lincoln for years, but these demos mark its first release in listenable form.

If you want to see more Meza, look for him playing “Rescue Your Heart” in the first installment of a video series we’re premiering from contributor Nickolai Hammar. The intimate videos rely on a single camera and a musician performing a single song. Keep an eye out for more from the series later on, including Max Holmquist (Oquoa).

Quasi-Lincoln electronic pop and dance band Cherub, whose frontman Jordan Kelley grew up in Lincoln, plays The Bourbon Wednesday. Tickets are $15 or $18 DOS — the duo has an impressive following in Lincoln, so don’t be surprised if tickets sell out.

Wednesday will be Cherub’s first return to Nebraska since garnering Top 40 airplay this summer with the 2012 single “Doses and Mimosas.”

The duo is currently touring to support its second album, Year of the Caprese, released earlier this year.

Tickets for Conor Oberst’s performance at The Grammy Museum in Los Angeles go on sale Thursday. Oberst will perform from this year’s solo album Upside Down Mountain and sit down for an on-stage interview with Grammy Foundation’s vice president Scott Goldman. Buy tickets here when they become available.

According to Routine Escorts’ Twitter feed, the ambient electronic duo is working at Enamel Studio on their new EP, The Good Lies EP, a follow-up to last year’s Grown-Ups EP.

Monday means add day on HN Radio. Streaming at the top of any page on the website, you can find tracks from Low Horse, Yuppies, Dirty Talker and Millions of Boys, who, as we mentioned last week, are recording a new record with Matt Carroll at Little Machine in Omaha.