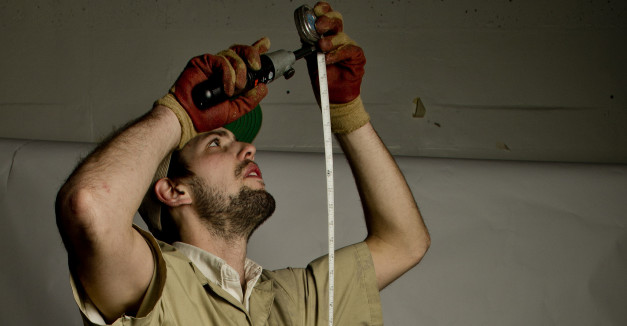 To be sure, the album is a departure from previous Green Trees work. Where on his first release, Hello?, and the handful that followed, the (now former) Universe Contest keyboardist played with a goofy self-aware sarcasm, Private Miracle is something more somber, closer to him.

The veil of irony that separated — maybe even protected — Freidel the person from Green Trees the singer-songwriter has thinned, if not altogether disappeared.

Of course, the work still evokes smirks. He sings of getting drunk at prom on album opener “How Are You.” And on “Play Music All Day,” he sings “Marijuana, isn’t it great? … Yes I wanna play music all day.”

It’s easy to imagine Freidel alone in his apartment, where he wrote and recorded most of the album, playing with vocal effects on his microphone and a newly-discovered sound on one of his many synthesizers, frivolously singing whatever pops into his head and fits the melody.

But there’s something else here, perhaps darker. His voice floats on synthesized minor chords, faintly echoing itself on tracks like “Another.”

“Atmosphere in music is the most interesting thing to me,” Freidel says.

On Private Miracle, that atmosphere is persistently grey and autumnal. His earnest, imperfect voice maintains a certain innocence to the record, a heedless sun suggesting its presence through a blanket of cloud cover.

When he sings: “Feel good like you know you should … everything’s fine” on “Feel Good,” it feels less like Andrew WK imploring you to party for the benefit of your soul and more like an obligation from Big Brother: feel good or else.

Freidel says he’s found himself less and less interested in rehashing old songs or playing live, which is partially how he explains his departure from Universe Contest. He’d rather be at home,  exploring new textures and swaths of color, creating something — perhaps that atmosphere — he hasn’t heard before.

In that sense, Private Miracle is something private. Freidel handled all the writing, recording, producing, mixing, releasing himself. Like a true bedroom-based passion project, the album is a lengthy 16 tracks, no co-conspirators to enforce any limits.

And to forge forward, Freidel says he often digs backwards.

There are instruments, recording techniques, microphone placements that come in and out of vogue over the decades. The ambience these methods have created interests Freidel, whether they’re intentional or incidental.

Other than Freidel’s presence, the one thing that remains a Green Trees constant is a finely-tuned pop aesthetic. For instance, the melody for album closer “Maybe I Know” could probably be found on Sgt. Pepper’s cutting room floor.

Of course, to strive to make something new and to actually do it are two different things. It seems unlikely that in the last 20 years, the likes of Private Miracle has never been heard before. But Freidel seems happy just to add his two cents to the fortune of ideas already available.

“I do it because I have the idea,” he says. “All music that has ever been recorded, at least since the ‘50s and ‘60s is out there, it’s alive. No one may ever listen to it again, but at least it’s there.”

You can’t pretend he isn’t talking about Green Trees, as well.

In the mean time, maybe Freidel’s music will take you to a prom, one where Tim Burton is the theme (but no one will admit it), where everyone dresses in dark colors and dances like mopey Peanuts characters.