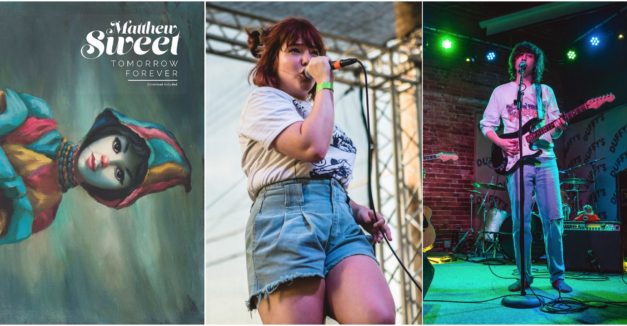 Remember that Matthew Sweet Kickstarter-funded project, the massive endeavor involving more than a handful of musicians and which has been in the works since the early part of the decade? It’s finally here.

Tomorrow Forever, Sweet’s new double album, released today on his own Honeycomb Hideout label (distributed through Sony/RED). It’s his first since 2011’s Modern Art and first new record since returning to his home state of Nebraska.

The sheer amount of material Sweet recorded throughout the multi-part creative spurt was unfortunately not the only factor in its delay. Not long after his move to Omaha from Los Angeles in 2013, his mother passed away. Sweet set the project aside in order to grieve.

But the rock singer/songwriter come out the other side of that process with roughly 38 songs, all tracked in his newly-built home production studio, Black Squirrel Submarine. A cast of characters helped make the record, and they include the likes of guitarists Jason Victor (Steve Wynn & the Miracle 3, Dream Syndicate), Val McCallum (Jackson Browne), John Moremen (The Orange Peels) and Gary Louris (The Jayhawks). His longtime rhythm section of Paul Chastain and Ric Menck (both of Velvet Crush) are joined by the Bangles’ Debbi Peterson. And The Zombies’ Rod Argent makes an appearance at keyboard.

The resulting 17-track album is a throwback to the mid-’90s years on which Sweet made his name. Tracks like opener “Trick” and “Pretty Please” are rich with sprightly, crunchy guitar work and Sweet’s sunny-day tenor. Deeper cuts like “The Searcher” and “Off The Farm” open a bit wider and burn a bit slower. While delivering on a number of heartfelt subjects, his musical positivity never falters.

Sweet celebrates the release of Tomorrow Forever with two shows at The Waiting Room Saturday, July 8 and Sunday, July 9. He then heads on a two-part cross-country tour. See the full dates below:

After releasing their debut full-length and follow-up to last year’s self-titled EP at Duffy’s on July 11, Lincoln ska punks Mad Dog and the 20/20s will set out on a two-week tour that stretches from Los Angeles to Dallas to Kansas City. Check out the full list of dates below and RSVP to the release show at Duffy’s with No Thanks here.

Speaking of tours, Omaha Americana band Middle Folk are hitting the road for the first time. The four-piece dropped their eponymous debut last year, which brought together folk influences from Bob Dylan to Fleet Foxes, and they’ll bring those tunes to five states on their July Midwest tour. Check out the full tour below.

See Through Dresses kick off their summer tour tonight in Kansas City at The Riot Room, and on Wednesday, GoldFlakePaint premiered, “Lucy’s Arm,” the band’s third single from their upcoming sophomore LP Horse of the Other World. The track is a visceral, power chord-driven rager with a towering chorus and a display in Matt Carroll’s guitar prowess. Give the track a listen below.

Beginning in 2008 in the halls of St. Theresa’s Catholic School, the duo of Aidan Chrisman and Ryan Seib founded the band that would evolve to become the indie rock band Seymour.

The band underwent changes as the pair’s tastes in music phased in and out.

“Ryan and I have always been huge Beatles fans,” Chrisman, co-frontman, said. “We went through some intense phases of being into Pink Floyd, Simon & Garfunkel, and the Beach Boys.”

Just as phases come and go, so did Seymour. School, work and life in general would get in the way, putting the band on the back burner. The pair would jam with friends Alex Keogh and Cody Claridge, who have become permanent members, but did not book very many shows.

“It’s always been on and off up until recently,” Chrisman said. “We never used to play shows (until) a couple years ago.”

Fast forward almost a decade since the beginning, the Lincoln band released their debut EP, entitled They Live on Wednesday, June 7 on Bandcamp. Seymour will be playing in support of the debut EP, with the Chicago polyrhythmic band, Crown Lark, and the fellow Lincoln band, The Grand Poobah at Duffy’s Tavern on Sunday, June 18 (RSVP here).

Comprising seven songs, the EP takes the listener on a wave of crooning vocals brought by both Chrisman and Seib. The duo splits not only the lead vocals, but also the songwriting.

“It was usually just Ryan and I who wrote and recorded the songs together,” Chrisman said. “Some songs can be more him than me.”

The surf rock synthpop of Seymour is rather slow, and lulls the listener into a dreamy state of as they’re taken through stories of heartbreak and growth. “Luv of Yer Life” brings the painful reminder that comes with recounting what could have been. One can almost hear the words dripping out of the pair’s mouths and landing in a vat of exhausted anguish.

And just as “Luv of Yer Life” slows, it picks up ever so slightly with “Behind the Wheel” until the main character senses that things are not going as he had hoped. “I’ve been here long enough to tell that I should go now.”

There’s no telling where Seymour will go, or how their sound will evolve with time, but it can be guaranteed that the marriage of breathy vocals and an ominous lyrical drip will be tranquilizing to the listener.

What began as just something fun for two middle-schoolers has grown into something larger, but the approach has remained simple: make the best music possible. Chrisman said that the goal for the band currently is to make songs that they personally would enjoy listening to, and hope to “go out and give a genuine performance.”

‘The Aliens’ play opens tonight at The Mez

When people think of “confusing” times in their lives, adolescence and early adulthood are often considered the most daunting of stages. And Hollywood knows this, as there’s rarely a shortage of coming-of-age flicks at the movies. But anyone who has advanced past a college age knows those growing pains never really go away.

Tonight, The Mez hosts the opening of “The Aliens,” a 2010 play by Pulitzer Prize-winning playwright Annie Baker, which captures the quarter-life turbulence that two thirty-year-olds feel as they look at where they are and where they had wanted to be. The story follows them as they bide their time on the back patio of a coffee shop in rural Vermont until they meet a young barista who parallels their confusion. Self-examination and reflection follow as the three of them try to learn whether they’re brought together by the same characteristics that alienate them from the rest of the world.

The play, directed by Kyle Brosnihan and featuring the local cast of Harrison Cass, Paul Clark and Ben Hammar, runs Friday through Tuesday. Showtimes are 8 p.m. everyday except for Sunday, when the show begins at 2 p.m. Tickets will be available at the door, but you can snag advance tickets here and RSVP here.

Prepare yourself before a packed weekend of shows happening in venues from bars to farms with our picks below. Take a look at our more comprehensive list of events here, and let us know in the comments which shows you’ll be hitting.

Le Butcherettes with Hussies at Vega- On an off-date from their supporting tour with post-hardcore heroes At the Drive-In, Guadalajara, Mexico-based garage rock three-piece Le Butcherettes will stop at Vega for a night of loud-quiet transitions and primal drumming. The band’s last full-length, A Raw Youth (2015, Ipecac), was a raucous, energetic record anchored by frontwoman Teri Gender Bender’s eccentric, PJ Harvey-inspired vocals that have made Le Butcherettes a must-see live show. Omaha punks Hussies open the show. 9 p.m. 18+. All ages. RSVP here.

Satchel Grande at Slowdown – Omaha party-funk mainstays Satchel Grande hit Slowdown’s Beer Garden on Friday night to kick off the College World Series with a free dance party following the CWS opening ceremonies. The show is only the first in a slew of events at Slowdown during the CWS. Take a look at the full schedule here. 9 p.m. 21+. No cover. RSVP here.

2017 Nebraska Folk and Roots Festival at Branched Oak Farms – Lydia Loveless, Aaron Lee Tasjan and The Cactus Blossoms headline this year’s Nebraska Folk and Roots Festival, which will also offer camping, educational workshops and food trucks. KZUM has a full guide to the festival and the Lincoln Journal Star has interviews with Loveless and The Cactus Blossoms. The concerts start tonight and Saturday. Buy tickets here.

George Clinton and Parliament Funkadelic with Lucas Kellison and The Undisco Kids at The Bourbon – Things are bound to get rowdy at The Bourbon on Saturday night when iconic funk and soul singer George Clinton and his band Parliament Funkadelic hit the stage with their flamboyant and jubilant live performance. Clinton, 75, who is credited with developing P-funk and who has worked with Red Hot Chili Peppers, Primal Scream and Kendrick Lamar, is back on the road for a lengthy summer tour. Lucas Kellison and The Undisco Kids open the stop at The Bourbon. 8 p.m. $38. All ages. RSVP here.

Maha Presents: The Joy Formidable with Radkey at The Waiting Room – Nearly a year after playing the main stage at Maha Music Festival, Welsh indie rock trio The Joy Formidable return to Omaha for an intimate club show at The Waiting Room. For more than five years now, the band has blasted its arena-ready riffs in front of ever-growing audiences, and they’ve got some new material to burn through after releasing an LP, Hitch, and and EP, Sleep is Day, in 2016. St. Joseph, Missouri, punk band Radkey heads to Omaha for the show too. 9 p.m. 18+. $18. RSVP here.

Crown Larks with The Bland Poobah and Seymour at Duffy’s Tavern – Chicago experimental rock band Crown Larks, fresh off the release of their full-length Population last month, hit Duffy’s on Sunday one day before the four-piece wraps up its tour that began in early May. Art rock duo The Bland Poobah (The Grand Poobah minus their typical visual art/music format plus some freewheeling unpredictability, according to frontman Adam D’Josey) and Lincoln psych rock band Seymour add local support. 9:30 p.m. $5. 21+. RSVP here.