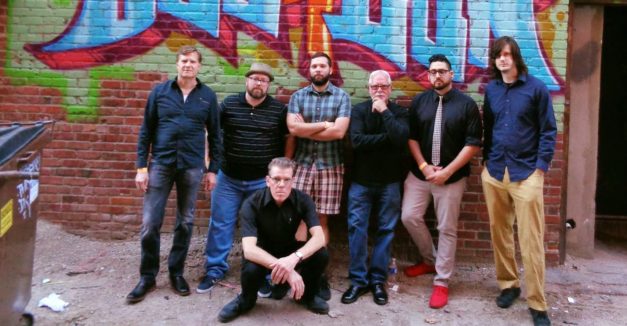 Third wave ska exploded into popularity in the mid-’90s with bands like Sublime, Less Than Jake, No Doubt and The Mighty Mighty Bosstones bringing the genre, at least temporarily, into modern favor. As with any style, multiple strains of ska sound found their way into the light, some edgier than others and some more devoted to its roots.

When The Bishops formed in 1995, their interest lay in Rocksteady — a successor to the Jamaica-originated ska of the ‘50s and a precursor to the ska of today — and it was born of days filtering through Dave Sink’s record store, in the Old Market Antiquarium bookstore.

“At first we wanted a sonic diversity that we weren’t getting by sticking to straight ska,” the band says. “The different sound was something that just spoke to us. Really though, our first love was old school ska.”

While The Bishops disappeared from 1999 to 2008, the band’s contemporary reinterpretation of ska has brought success since its reformation. The Omaha septet — Vocalist and multi-instrumentalist Mike Bechtel, trumpet play Ira Hughey, lead guitarist Jamison Figueroa, saxophonist/keyboard player Scott “Spiny” Norman, bassist “Dirty” Dan Vaughn, drummer Derek Bird and alto saxophonist/flutist Bill Farber — has been nominated for the Omaha Entertainment and Arts Award for “Best Ethnic/World” for the past six years, winning that award in 2011, 2012 and 2016.

This week, The Bishops take the show west to Hear Grand Island. Before they headline the latest installment of the Friday night concert series, HN caught up with the band to chat about its old-school influences, working with an original genre recording artist and why original music is important to Greater Nebraska.

Hear Nebraska: Rocksteady, as I understand it, is a successor to ska that originated in Jamaica around 1966, how did you become introduced to the genre and what made you want to become part of it?

The Bishops: When we first formed the band, a few of us had been playing in other bands which performed 2-tone and ska punk. Those of us who initially started the Bishops had become interested in learning more about the roots of the music as we would come across compilations which highlighted the first wave of ska and the transition to rocksteady. If memory serves, most of these were found at Dave Sink’s record store in the basement of the Antiquarium. As to why we wanted to become part of it, at first we wanted a sonic diversity that we weren’t getting by sticking to straight ska. The different sound was something that just spoke to us. Really though, our first love was old school ska.

HN: The Bishops formed in 1995, during what some would call the golden age of ska. How do you think the genre has aged, and how has that influenced your music over the years?

TB: Well, I believe the band would beg to different on what constitutes the ‘golden age of ska,’ but I get your point. Certainly the genre has aged in the U.S. since those days. There was a wane in popularity of those ska-punk sounds, what some call the ‘third wave’. The traditional style we were more tuned into also suffered some of the crash that the harder or ‘poppier’ style did, but not to the extent that the others did. Really though, the decrease in attention to the more popular styles didn’t really impact our music as we were always more into the original style.

HN: Your album, Time to Move came out in 2014, what would you say kept you from releasing a full length for so long?

TB: There was an assortment of different reasons it took us so long to release a full length. First, the break we took between ’99 and ’08 really added some time to that. Nine years off will certainly impact timelines around releases, haha. In the first phase of the group, we released a six track cassette in ’96. Then we did a demo with Mike Kronschnabel in ’97 which we shelved as we didn’t like how it turned out (our fault). Another demo in the summer of ’98 with Mike Brannan at BJM Studios in the Ranch Bowl yielded better results and we shipped that around a bit, but when the band hit the pause button in early ’99, the demo sat forgotten. Soon after reuniting in the summer of ’08 we decided to do an EP and got a nice sound at The Faint’s Enamel Studios downtown with Jim Homan. It was another good effort that we got some decent mileage out of. So, there were plenty of recordings, but before Time To Move at ARC with Mogis, we just hadn’t hit the right stride. Also, the first phase of the group was plagued with constant lineup changes and that didn’t help anything.

HN: You’ve been nominated for and won Best Ethnic/World music in the Omaha Entertainment and Arts Awards multiple times. What is most important to you about the representation of the genre from you to your community?

TB: Part of the interest for us in playing this style was to share the music that we loved and that we wanted to hear ourselves, with the people who also were interested in those styles. I feel it’s because of that love and respect for the roots, that we’ve been gifted not only with the OEAA recognition, but also with some incredible opportunities to support and collaborate with more than one foundation artist. For example, we have recently been working with original Jamaican recording artist Monty Neysmith of The Pyramids/Symarip/The Bees to support him in some touring and help him record some classic tracks as well as some of his original songs. It has been the most fulfilling of our musical endeavors to date and we’re so very thankful that he continues to invite us to participate in the effort with him. We recently returned from an East Coast tour with Monty, and are currently planning an EU tour for early next year and a West Coast tour with him in the fall of next year.

TB: Communities need shared experiences and spaces in which to develop and hold conversations. Music and other arts help facilitate those via events and content that they share. Local art inspires local participation and when people participate locally, they tend to get involved in other interests as well.

Out on the southern coast of Oregon, one Nebraska ex-pat and a few friends are inviting touring bands to collaborate in creating live video content that promotes nationwide networking for local musicians.

Tim Scahill, the former frontman of now-defunct Lincoln post-hardcore outfit Rent Money Big, joined in on the idea that had been brewing among the members of Coos Bay-based math rock four-piece Ants In My Eyes to record live video sessions of local bands just for fun. Scahill worked on a few Love Drunk (the Nebraska one-take, live music video production project) videos when before moving to Oregon, which he said gave him confidence that Tidalbridge could be both fun and successful.

On paper, the idea isn’t much different than what Audiotree in Chicago has been doing for the last few years, but Scahill says Tidalbridge’s goal is driven by the vision of turning Coos Bay on the Southern Oregon Coast into a destination for touring bands traveling from Northern California to Eugene, Oregon. By bringing touring bands to Coos Bay, Tidalbridge can then foster a network between local bands and touring bands looking for connections outside their own music scenes.

Tidalbridge’s first live session, with dance-rock band Crushingcrayons, dropped on YouTube in late December. Since then, the group has released nearly a dozen more sets of videos promoting the involved local bands and drawing touring bands away from Interstate 5 to the Coos Bay music community.

If your band is touring in the Pacific Northwest, reach Tidalbridge about collaborating here.

In the hook for The Dilla Kids’ latest track “On The Bounce,” producer and MC Marcey Yates promises that the track will make you want to do just that. And after the volume is cranked on a crackling vintage radio in the song’s music video, the foot-tap-inducing jazz rap instrumental confirms that Yates wasn’t kidding.

The music video, shot by Zach Wallinger on a sunny day in and around Midtown Omaha’s Alliance Barbershop, captures a positive energy that glides from the kids dancing with joyful grins to Yates’ and Xoboi’s lyrics expressing their appreciation for their community and opportunities. And that was The Dilla Kids’ intention for the video: to just be “something positive that you don’t get much of these days.”

“On The Bounce” is the lead single from The Dilla Kids’ upcoming mixtape “Like.” Check out the music video below.

HN photographer Lauren Farris went to Jazz in June for a second straight week Tuesday, this time to catch Bill Wimmer’s Project Omaha and Omaha-native jazz drummer Victor Lewis. The son of saxophone player Richard Lewis and pianist-vocalist Camille Lewis, Victor has been immersed in jazz his whole life, performing professionally for the first time at age 15. Since then he has excelled at everything from commercial gigs to his own original compositions. A current New York resident, he teaches drummers and coaches jazz combos at Rutgers University. Writer Bill Kohlhasse once called Lewis  “a master of shading and color, and the kind of timekeeper that could teach a clock new ways to tick.”

See photos of his performance below. Jazz in June continues next Tuesday, June 20, with Terence Blanchard and the E-Collective. 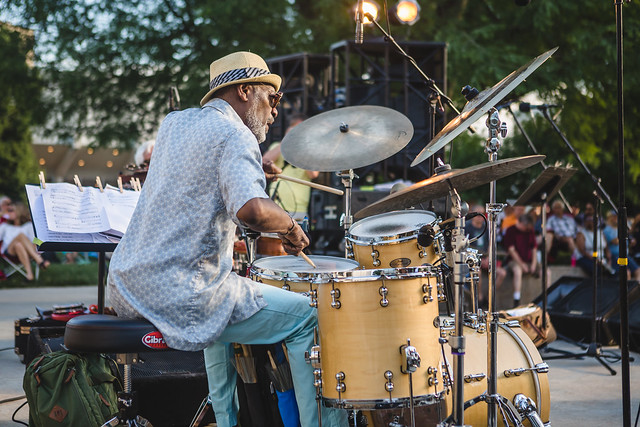 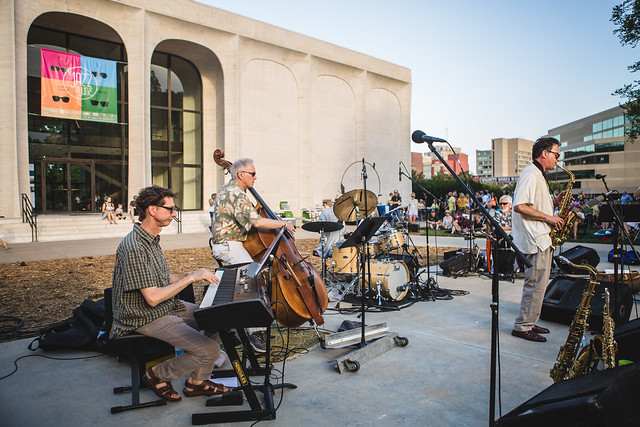 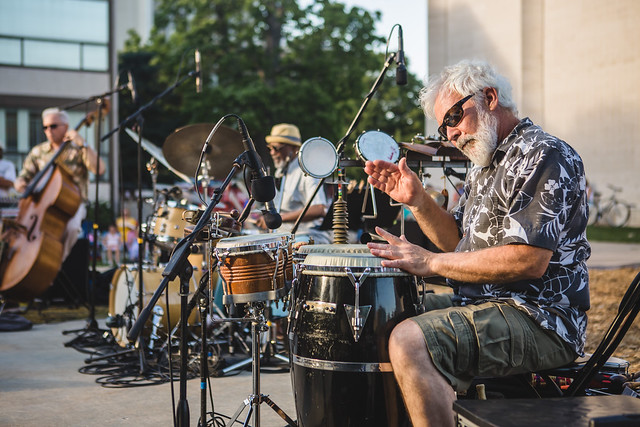 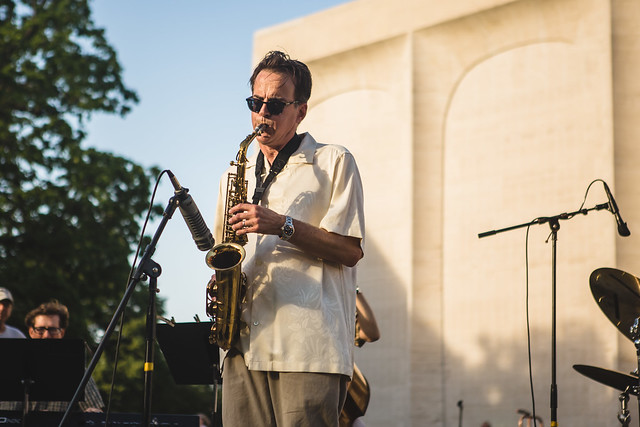 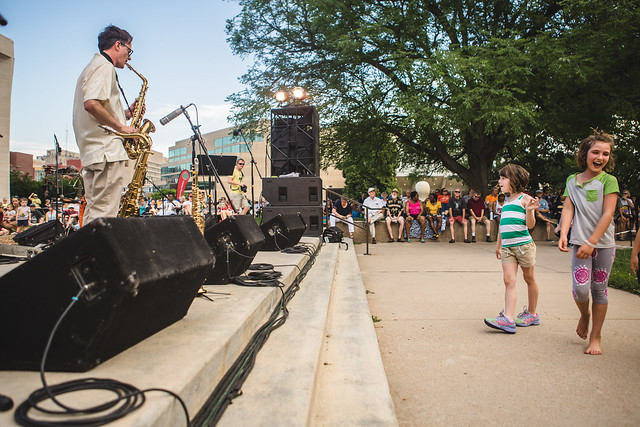 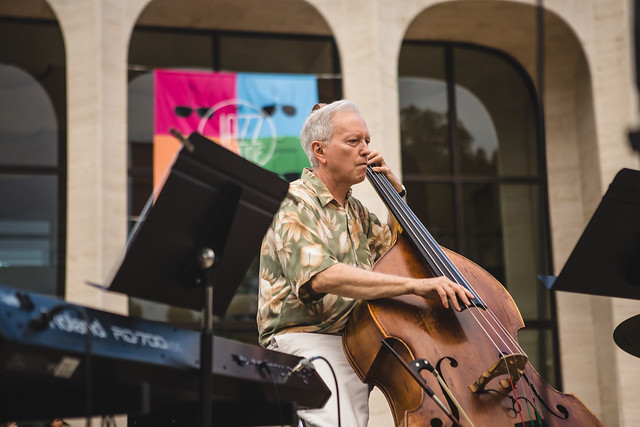 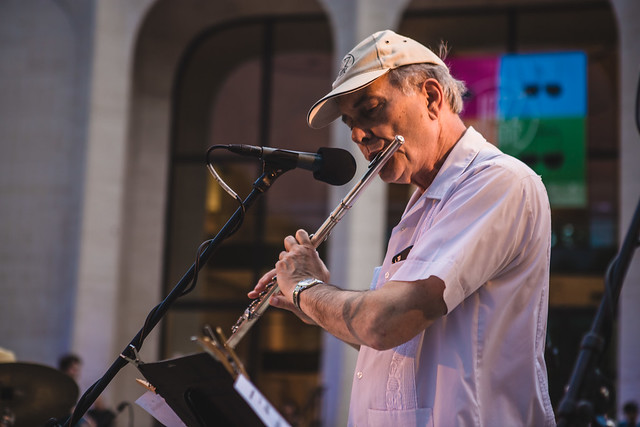 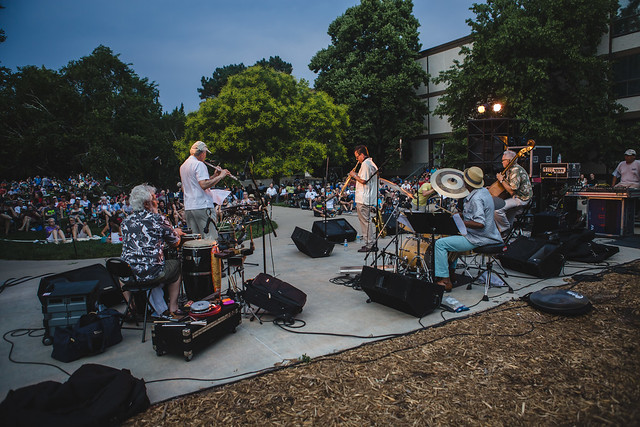 HN contributor Morgan Kazanjian went to Lookout Lounge on Monday to catch Richmond, Va. thrash band Municipal Waste, Detroit punks SNAFU and locals RAF and In The Attack. Municipal Waste is on tour in support of its forthcoming sixth studio album Slime and Punishment, out June 23. 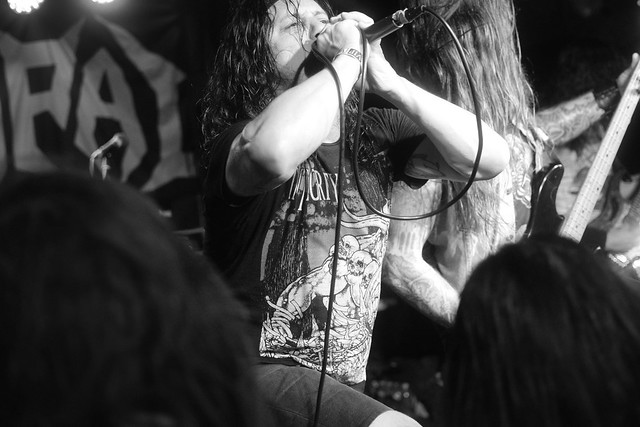 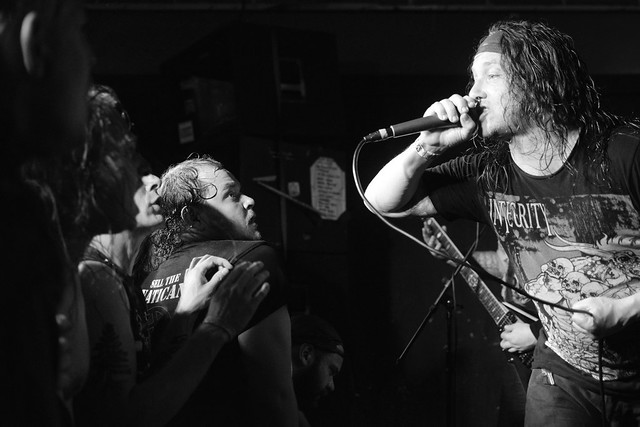 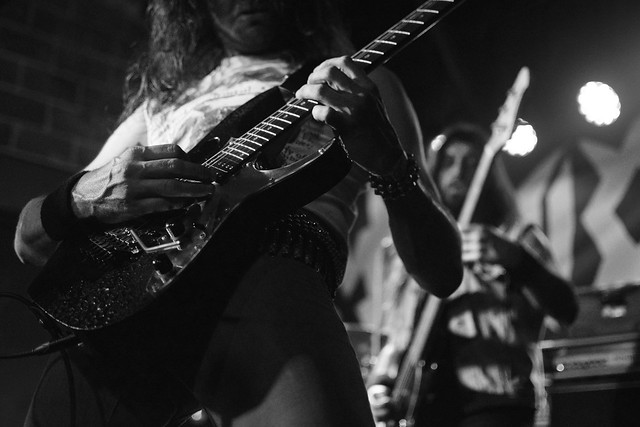 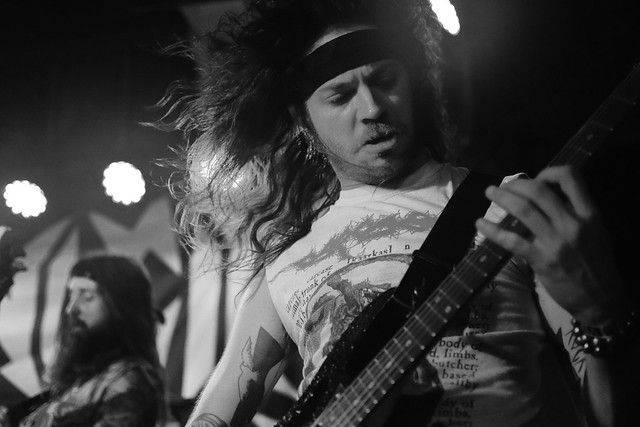 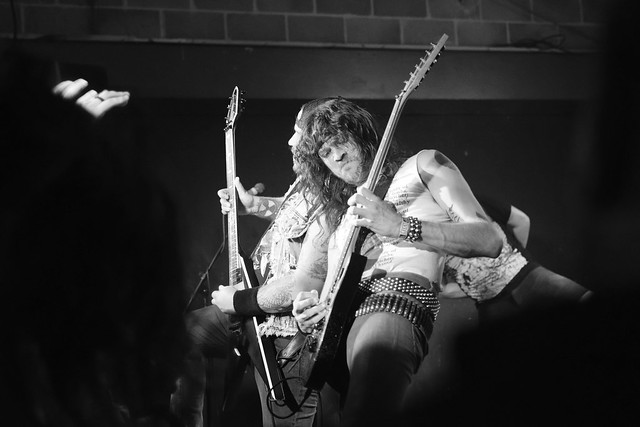 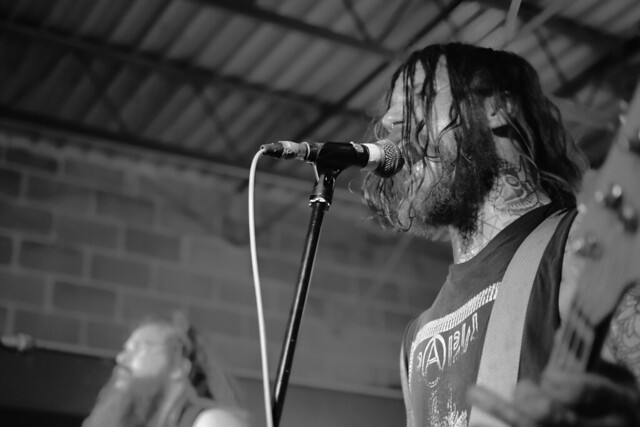 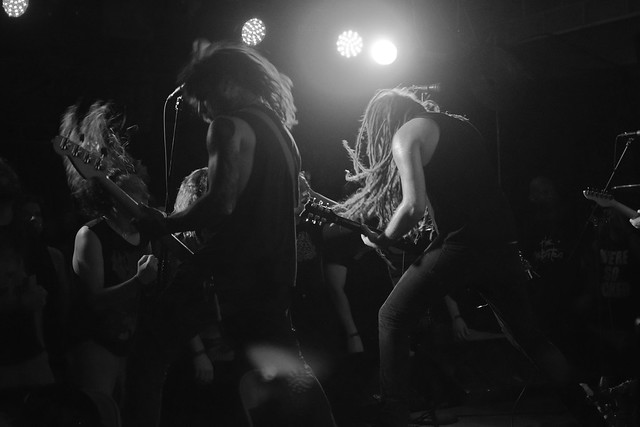 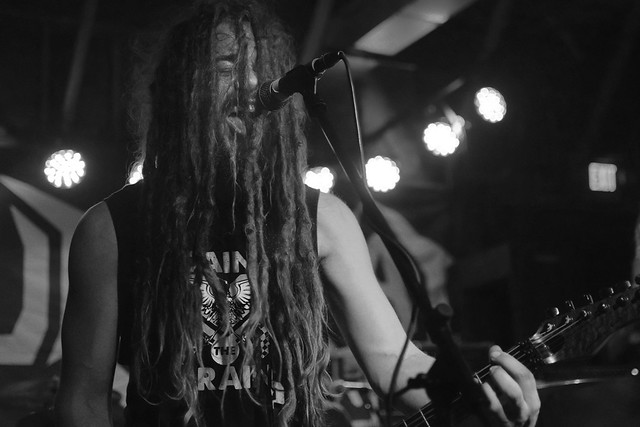 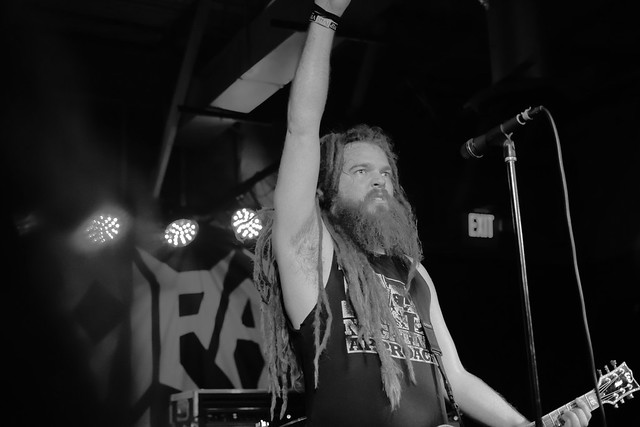 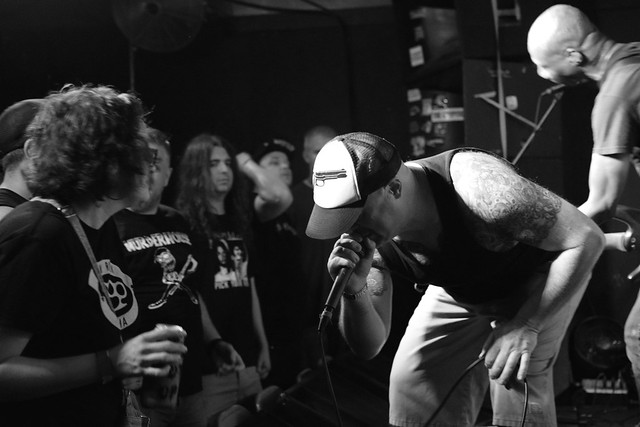 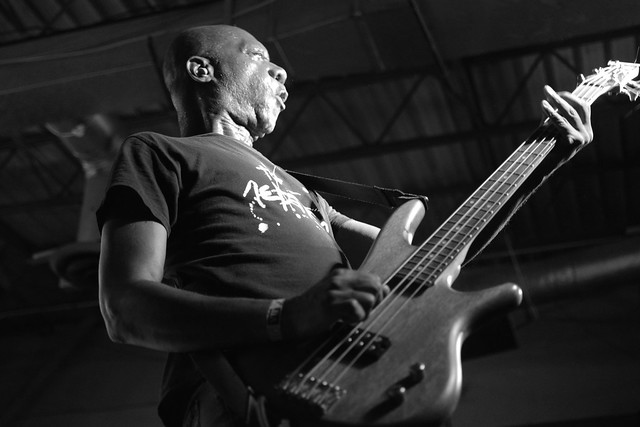 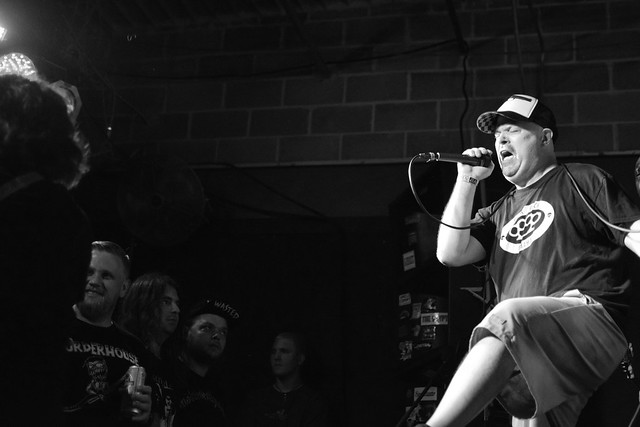 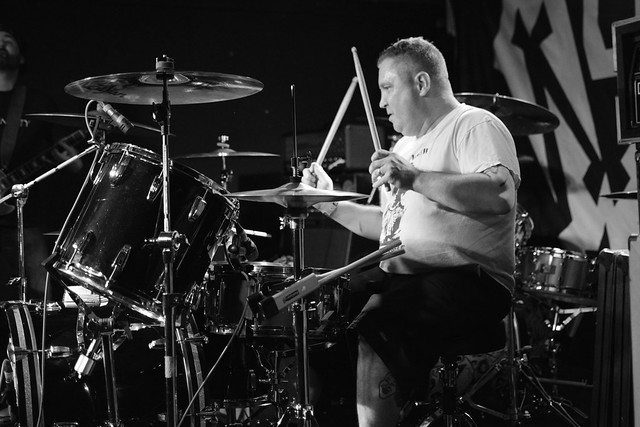 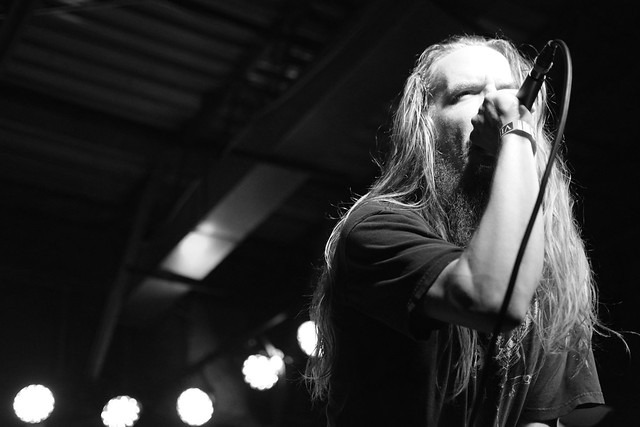 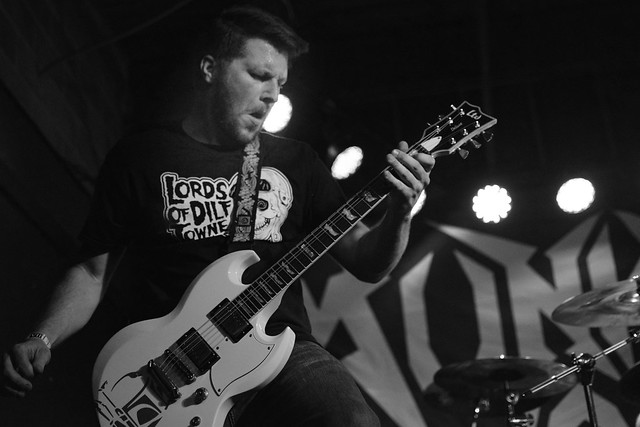 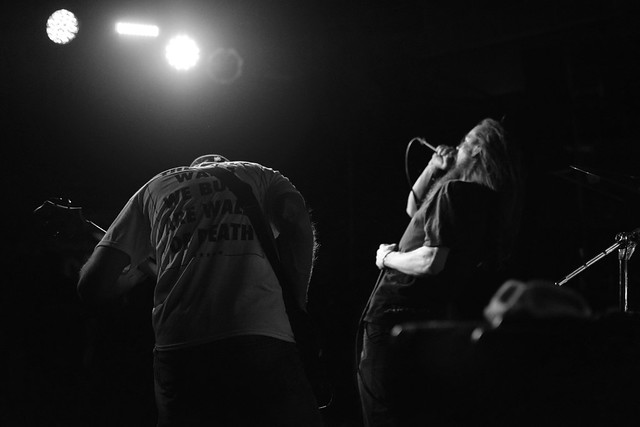 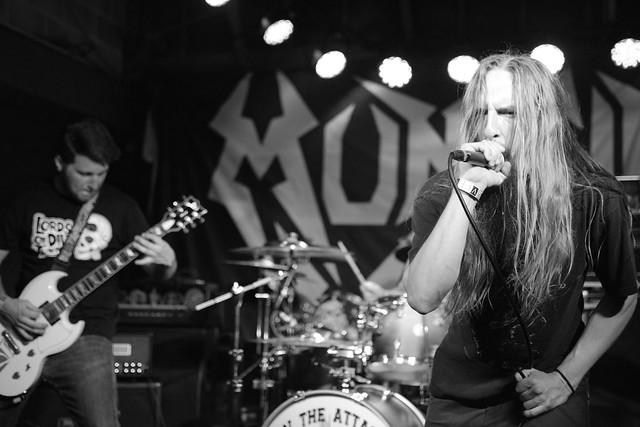 Here’s a look at what’s happening during the next couple of nights. Find a fuller listing via our statewide calendar here and add your own here. Email us with news tips, story ideas, comments, complaints and whatever else is on your mind at news@hearnebraska.org.

Third Thursday All Ages Open Mic Night with Tragic Martha at Wave Pizza Company – Wave Pizza Company in Grand Island is bringing back its Third Thursday open mic night tomorrow night, which will feature a set from Hyannis, Nebraska-based folk rock band Tragic Martha. Performers of all disciplines, from music to comedy to poetry, are invited to join the free, all ages event. Participants can still sign up for time slots online, and if there are any available times left by the start of the event, time slots will be reserved on a first come, first served basis. RSVP or grab a time slot here.

Matt Whipkey Listening Party and Pledge Music Launch at Hi-Fi House – Last month, Omaha singer-songwriter Matt Whipkey dropped “One Shot,” the wistful, harmonica-driven lead single from his latest LP, “Best New Music.” On Thursday, Whipkey is offering the chance to hear “One Shot” and the full LP at a listening party, which will serve complimentary beverages. The listening party will also kick off his Pledge Music campaign to raise money for his concept album, “Driver,” about his experiences as an Uber and Lyft driver. Each donor will receive a digital download of “Best New Music.” 7 p.m. RSVP here.