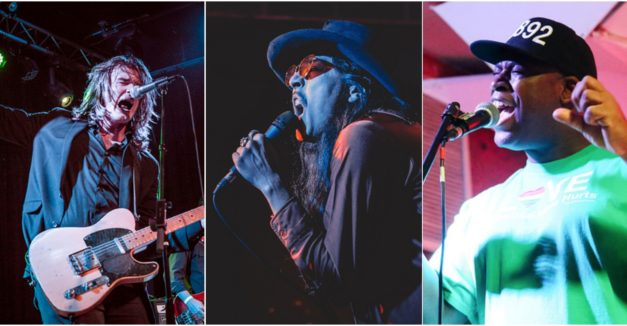 As we speed toward the end of 2017, there are still a few new music releases on the horizon. We start today’s news rounding up a few of the singles previewing those new albums.

First up, Omaha rock singer/songwriter Matt Whipkey, who dropped new track “Winter Tires” this week. It is distinctly Whipkey, with hooks as wide as the open road and a few blazing licks to give it an extra boost. The track will appear on his forthcoming album Driver, written about his experiences as an Uber and Lyft driver and funded entirely by a Pledge Music campaign.

Listen to “Winter Tires” below and catch Whipkey this Friday, Nov. 24 with Traveling Mercies at Reverb Lounge (RSVP here).

Omaha hardcore band Bib has finished a brand new EP, Moshpit, and its first track, “Freedom,” is out this week. It rolls as heavily as anything in the band’s catalogue, grooving through a bluesy opening riff before exploding into the meat of the track. Vocalist Nathan Ma cuts loose a signature screech as the band takes off behind him.

Moshpit is out December 1 on Pop Wig Records. Pre-order here and listen to “Freedom” below.

A couple of new artists have pitched in new tracks as well. Lincoln songwriter Ryan Human is one of them, having just released his debut album The Piano Room this month. The four-track EP is stripped-down an intimate, with gentle piano ballads laying the foundation for Human’s hopefulness and positivity. “You Are So Strong” sums the album up nicely; listen below and see Human at the EP release show Friday, Dec. 15 at Vega (RSVP here).

Finally, Omaha garage rock band Orca Welles will release its debut EP Many Years To Go on Nov 25, and have released the album’s first track “Undecided.” Like much of the record, it carries a simple yet addictive two-part song structure alternating between bouncy chord progressions and frontman Alec Williams’ catchy guitar licks. Williams and rhythm guitarist Olivia Baxter share vocal duties, both detailing reflections on youth and the future’s uncertainty. Listen to “Undecided” below and catch the band at its Nov 25 release show at The Commons (RSVP here).

The holiday shopping season begins this weekend, but you don’t have to join the fray to get your hands on some sweet Hear Nebraska merch. This Cyber Monday, shop in our online store and automatically receive 25-percent off all purchases. Grab a Good Living Tour hat for yourself or a “support local music” tee for the Nebraska music fan in your life.

We realize Amazon is in the mix for much of your holiday shopping. But did you know those online purchases can benefit one of your favorite nonprofits? Shop online through Amazon Smile and a portion of qualifying purchases goes right back to Hear Nebraska. Log in through our portal and shop as you normally would; they take care of the rest.

This is it for news this week, and with so much going on over the holiday weekend, we’re rounding up some of the highlights. Picks below, with a fuller listing in our statewide calendar here. Tell us where you’re going in the comments or hit us up on Twitter.