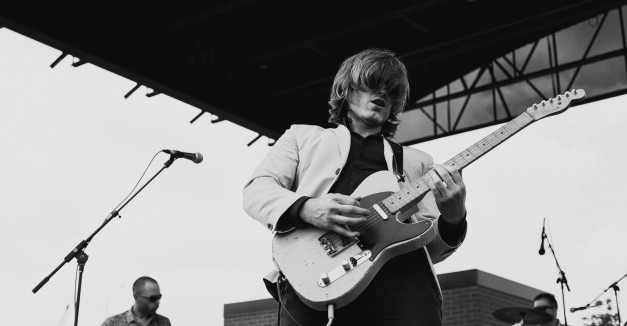 Matt Whipkey has made a year of touring nationally with big name musicians. Tomorrow night, he’ll add another giant to the list.

Along with recently reunited Anonymous American, the Omaha singer/songwriter will open for classic rock icons Heart at Hartman Arena in Wichita, Kan (tickets here). It will mark Whipkey’s third arena show in less than a week, after playing a pair of opening dates with country music pioneer Dwight Yoakam, with whom he’s played more than a handful of dates in 2015.

Of the arena concerts, Whipkey says it’s important to maintain as much of his normal routine as possible. Keep the energy high and the show moving, and the rest takes care of itself.

“I have always written songs with that expansiveness in mind,” Whipkey says. “It is easy to let your emotions get the best of you because of the expansiveness of it, but it’s very important to slow yourself down [and] play like you would at a club.”

Anonymous American — comprising Whipkey, Bob Carrig, Wayne Brekke and Corey Weber — played their first show since 2011 two weeks ago at Barely Street Tavern. The band had a run in the mid-2000s that included 2006 LP Don’t Be Late. Whipkey says tomorrow night’s show will be “very much a Whipkey show.”

In July, Whipkey took a break from jet-setting to play an intimate backyard concert for SoFar Omaha. See his acoustic performance of “Month To Month” below:

Django Greenblatt-Seay has been making live, one-take music videos in unconventional places since 2010, spotlighting local and national artists in more than 130 productions.

Love Drunk turned the camera on itself in the latest edition, as Greenblatt-Seay’s band Gramps filmed session 134 at Mulhall’s Nursery in Northwest Omaha. The indie rock foursome performed a soaring, echoing rendition of yet-unreleased track “Another Earth” in an empty greenhouse.

Gramps celebrates its self-titled EP release Friday at O’Leaver’s with Millions Of Boys and Uh Oh (RSVP here). The album dropped digitally last week, and is available via iTunes, Spotify and Soundcloud.

Below, see Gramps perform “Another Earth” in the latest Love Drunk episode:

Tonight, Portsmouth, N.H., punk rock band The Queers plays Lookout Lounge with local support from The Kennicks, DSM-5 and The Pee Cats. The New Hampshire trio plays a blend of pop punk and surf, with driving Ramones-esque rhythms. They continue to tour despite not releasing new material since 2010’s Back To The Basement. In 2014, frontman Joe Queer found the public spotlight after issuing public support of Ferguson, Mo., police officer Darren Wilson following the shooting of Michael Brown, and referring to President Barack Obama as “Obongo.” Joe Steinhardt of Don Giovanni Records called on The Queers’ label Asian Man Records to drop the band, but later rescinded his remarks. In response, Queer called Steinhardt “a gutless whimp.”  RSVP to the show here.

Also tonight, Brooklyn alt-country band Yarn comes to Vega with support from Lincoln’s Sun Leaf. A photo on the band’s Facebook page depicts their night off in Lincoln, part of which was spent over drinks at Barrymore’s. Expect an upbeat, down-home performance from the once-Grammy-nominated roots band. RSVP here.