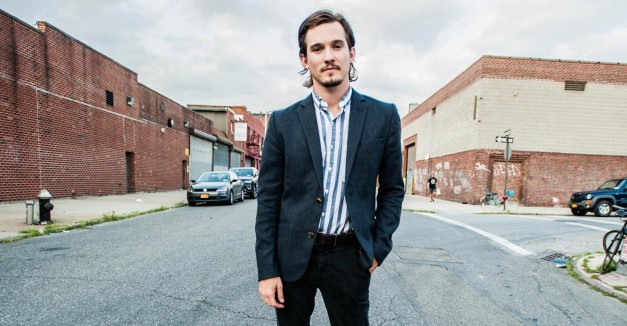 About a year ago, Farren reached out to Kasher about teaming up for what became You Be Me for a While. The split seven-inch, to be released on Record Store Day, April 18, features one song by Farren and one by Kasher. Farren and Kasher exchanged lyrics and chords to the songs they wrote, and then recorded their own versions of the other’s song — without having heard the original. Saddle Creek will release the split.

Farren’s relationship to Kasher-the-artist goes as far back as 2000, when Cursive’s tumultuous Domestica was released.

“[Domestica came out] when I was a lot younger and starting to write songs,” Farren says. “I drew a lot of inspiration from his early work. It really drove me to be better at it.”

Most notably, Farren fronted Florida-based punk band Fake Problems, who released two records with Side One Dummy. Now he plays in Antarctigo Vespucci with Jeff Rosenstock of Bomb The Music Industry. Yesterday, Farren released his three-track Where U Are.

Farren and Kasher have the same sort of tendency toward situation-specific lyrics. In a given song, you get the sense they’re talking about a certain day. Musically, Farren’s work, especially with Fake Problems, relies more heavily on pop melodies, emboldened by lightly-riffing guitars.

Two years ago, Farren and Kasher met in person, sharing a green room when Cursive was playing the larger room at Warehouse Live in Houston and Fake Problems was playing its smaller stage that same night. The two hit it off and kept in touch, so Farren decided to ask Kasher about collaborating.

“I agonized over e-mailing him about it,” Farren says. “I had written the e-mail and it was sitting there for like two days. I was so afraid to send it, in case he was like ‘screw you.’”

But anxiety is rarely grounded in reality. Farren says Kasher replied within the hour, on board. Farren initially thought the two could record together. It was Kasher’s idea to play each other’s songs blind, which appealed to Farren for its creativity and purposefulness.

Even then, after agreeing on an idea, Farren says he struggled with his own conception of Kasher as a talented and influential songwriter. He says, on one hand, he was amazed to hear Kasher singing and playing his version of a song Farren wrote.

“But it was also terrifying to have to put together my own version of a song he wrote,” Farren says. “It was difficult because it was him. I didn’t want to let him down or embarrass myself.”

Farren says, at first, he found himself nearly doing impressions of Kasher. Singing and playing how he thought The Good Life and Cursive frontman might. Eventually, he says, he was able to make it more his own.

Farren chalks up Kasher’s atypical composition to the way many independent musicians learn to write songs. He says most musicians are basically teaching themselves how to write at the beginning, discovering what works best. Something that makes sense structurally to its author may yield a totally different reading from someone else.

Which isn’t necessarily wrong. After all, that’s kind of the point of You Be Me for a While.