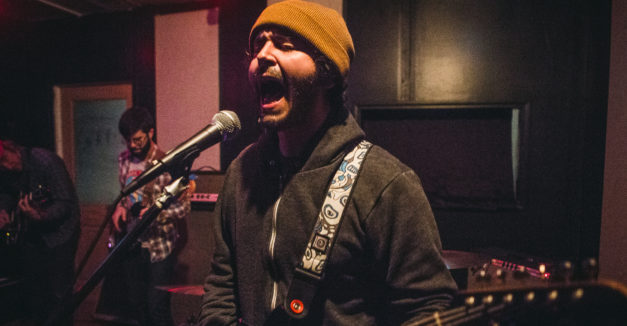 Daisies is immediately reflective with its mellow soundscape and lyrical documentation of frontman Bryce Hotz’ mind. The opener, “Big Ol’ Jerk,” carries a tender, apologetic quality that is immediately engaging. The opening chords remain throughout the song to offer a comfortable mental space to rest. The EP’s more unexpected elements follow, starting with an abrupt, bold synth to start the catchy “Fish’n.” An acoustic guitar harmonica pairing appears briefly in “Nursery Rhyme” before heading in an upbeat direction, mirroring the electric guitar rhythms of the rest of the EP. The sound of Daisies is vast and pleasant, both catchy and contemplative in its own right.

The band’s second installment is a clear follow-up to its May 2016 self-titled debut, carrying many of the same elements like upbeat chord progressions, loose songwriting and wet guitar parts. HN spoke then with frontman Bryce Hotz about the band’s Omaha ties and Hotz’ songwriting. Read the interview here.

Every once in awhile, our staff has the opportunity to follow its natural curiosity with all things music out-of-state. The past few years have found us at SXSW, Gainesville’s The Fest and Des Moines’ 80/35.

This year, we’re headed west to Boise, Idaho’s Treefort Music Festival. The five-day predominately indie rock festival has grown quickly since its launch in 2012, branching out from its focus on emerging artists to highlight various aspects of Boise culture and commerce.

Tonight, Vega features an all-Nebraska hip-hop billing, as BOTH, HAKIM, Kethro and Mesonjixx share the stage. BOTH and Kethro recently returned from a joint midwest tour, which included a stop at SXSW for BOTH. Tonight’s show is 18+ and $5. RSVP here.

Also tonight, at Slowdown, Omaha soul band Carson City Heat plays with alt-country acts Clarence Tilton and Sack of Lions. The show is all ages and tickets are $7. RSVP here.

Tomorrow night, Bien Fang will release its new EP, Garbage Island, at Duffy’s Tavern with No Thanks and High Ruler. The new EP is packed with goodies, including a zine with lyrics and illustrations. The show is 21+ and $5. RSVP here.

Tomorrow night, David Nance will join Flowers Forever, Lazy Wranglers, and Athens, Georgia band Crunchy at Brother’s Lounge. HN recently spoke with Nance about his Ba Da Bing Records debut More Than Enough, his stint in California and creating as a musician in a stream of them. Read the story here. Tomorrow’s show is 21+ and $5. RSVP here.

Also tomorrow night, The Ben Baldwin Trio plays its first show with Andrew Gossnell and Josh Lyons in the lineup at The Down Under Lounge. The trio will share the stage with Chicago roots rock band The Lucky Dutch and Omaha experimental band The Wood Notes. The show is free and 21+. RSVP here.