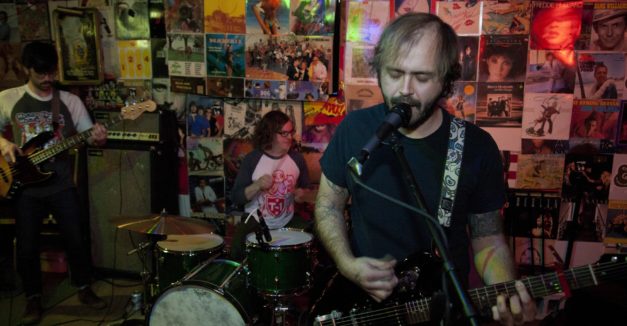 [Editor’s note: this video and Q&A previews Lodgings’ album release show Saturday, May 21 at Milk Run with Sun-Less Trio, Eric In Outerspace and The Morbs. Entry is $7, RSVP here.]

Honing in on a characterization of Omaha rock band Lodgings isn’t the easiest task. Sporadic, maybe, for the way it came together. Or how about consistently, roaringly confessional.

Hear them both in its moods and instrumentation. Bryce Hotz, current Noah’s Ark Was A Spaceship guitarist and Lodgings founder, excels at crafting that throw-your-hands-up frustration that befits a failing or abusive relationship with a person or substance, or even the stories we make up to rationalize such horrid behavior.

So maybe it helps to know that such productivity is streaky for Hotz. His tumbling rhymes and weighty subject matter spill out at the behest of some life event, some prompting. Having a cast full of musicians beholden to other projects (Simon Joyner & the Ghosts, Head of Femur, Razors, just to name a few) doesn’t make things easier in that regard. But when it comes, boy does it spill out.

“I’ll go a whole year and have a dry spell where everything I try writing sucks, then something will happen in my life or whatever and the spigot opens and they seem to come easily,” Hotz says.

Below, watch the band (as a quartet) perform the sharp and bursting “Hymn VI.” Then read our Q&A with Hotz below on the conveniences and pressures of recording at home and working with such a talented cast.

Hear Nebraska: You recorded the new album at Archetype Recordings, your home studio. What was the biggest convenience in that?

Bryce Hotz: I’m about 15 years into recording myself at home, so there couldn’t be anything more convenient than that for me. There are, however, both major advantages and also drawbacks. On one hand, there is a lot less pressure on yourself as a performer to not waste someone’s time and money while you get a good take, try out a new idea, have gear fail you. But consequently there is a lot more pressure on yourself to not fuck up the engineering side of it, which is easy to do when you split your attention in that way.

HN: When we chatted before Noah’s Ark Was A Spaceship’s record release, all of you noted how operating with a limited time frame was best for the process. How was the approach to this album similar and/or different?

BH: In certain ways, this project has been even more hurried than the NAWAS record. The band, in it’s current form, came together very quickly and we began recording the full length in less than 3 months of playing together. The difference with NAWAS is that we had almost 2 years to work out our songs and so when we went to go in and record with Ben [Brodin] at ARC], we just set up all the mics, played them live together and mixed, all within a weekend. I didn’t want to do that with Lodgings because I was afraid that in the midst of getting it all ready, and with everyone still being new to the songs, I could possibly miss something big during the tracking and not realize it until we got to mixing. I thought it would be better to go track by track and focus on each instrument so we got it right from the start. Also, scheduling with everyone made it harder to devote, say a whole week to recording. I am happy to say it still sounds like we are all jamming in a room together, though, to my ear at least.

HN: Lyrically, the rhyme schemes stack up on each other and have a sort of swaying rhythmic quality, calling attention to certain turns (I’m thinking of “Peasants”: our amateur awkwardness is couth/ it points to a well-received notion of youth/ that vital well-spring of truth/ demanding attentiveness). Is that something you’re mindful of or do those schemes come more naturally?

BH: Lyrics are difficult for me sometimes. I’ll go a whole year and have a dry spell where everything I try writing sucks, then something will happen in my life or whatever and the spigot opens and they seem to come easily. I don’t think I’m a particularly gifted lyricist, but I do like using excessive rhyming (probably to the point of cheesiness) and also alliteration. The way I write them hasn’t really evolved since high school, but my understanding of the subject matter has naturally matured as I’ve gotten older. I always write the vocal melody before I write the lyrics, so in that way, it’s sort of like trying to solve a jigsaw puzzle with words.

HN: There’s part of “There’s Nothing Sacred Anymore” that feels contemporary, like a social commentary, but I found myself considering specific relationships as well, and how they could become exhausting. Where are you coming from on that one?

BH: I wrote that one holed up in a cabin In Colorado this winter. I had been exhausted from a crazy busy year and on top of that an incredibly unhappy and stressful holiday season, so I wasn’t in the best of spirits, but being removed from it all somewhere peaceful finally helped me channel that negativity into something more positive. It’s a fairly broad commentary on how big of a letdown humanity (or even specific people/groups) can be and how we sometimes have to make up fairy tales to rationalize what seems like insane behavior exhibited by the world around you. It was actually the last song we recorded for the album. I came back from my trip and just sorta knew we had to put that one on the record, so the dudes, in typical stalwart fashion learned it and wrote their parts in a practice and we recorded it the following weekend in January.

HN: The Lodgings lineup contains many familiar names. Jim (Schroeder), Megan (Siebe), Dave (Ozinga) specifically seem to always part of multiple projects at once. How does that benefit what you’re doing? What are the challenges involved?

BH: Everyone is very busy, but we seem to make it work. It may help to elaborate on the history of the project: I first met Megan through our friend Kerry many years ago and then started to use her for recordings sporadically. I got the itch to play a live show again after 5 years of living the hermit life and mainly just recording alone so we worked out some fun little acoustic songs with our friend Colin Breen on piano. We were able to play one show in January 2014 before Megan got too busy with Cursive tours and Colin dove into the planning stages for what would become the Night Owl. I had started another band called Post Verse which was pretty steady at that point, so I kinda just let Lodgings set aside for the better part of two years. I almost brought it back for a minute that summer with Andrew and Rick from NAWAS and Sean Lomax from my old alt rock back Gyromancer, but then NAWAS started gaining steam again and I joined up with them at that point as well, so once again, it was set to the back burner.

Fast forward to late summer in 2016, [drummer] Eric [Ernst] contacted me about wanting to work on a new project, which was perfect because it seemed that Post Verse was sort of winding down. I had already been mulling over building an album from demos and that is when I decided to contact Jim and Dave and see if they wanted to join on. I have to say that this group is the most easy going and most fun I have ever gotten to work in. Everyone is great at what they do and good natured people with good senses of humor which makes every practice and show a blast.

HN: What is next for Lodgings? What is your goal with this project?

BH: For Lodgings, I assume we will record another album or EP within the next year or so. I’ve had a good writing streak this spring so there is a lot of new material to work with. There was talk of doing a little midwest tour this fall too, which would be so fun as I have not toured in well over 10 years! As far as goals go, really just to keep writing and playing music. It’s that simple. I’ll let it proceed from there as it will.