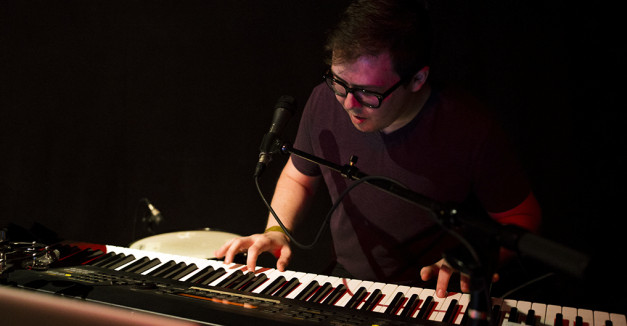 Rock ‘n’ roll is a tricky thing to nail down, but ask most people who were at Duffy’s Tavern last night — around 70 at peak — for Cadaver Dogs, In the Whale and Freakabout and they’ll probably tell you they’ve seen it.

Both Ohio’s Cadaver Dog’s and Denver’s In The Whale are guitar-and-drums two-pieces, a formula both bands fill out like any four-piece. Both are louder than any two people need to aspire to be.

Within 10 minutes of taking the stage, In The Whale drummer Eric Riley is sweating through his shirt. He and vocalist/guitarist Nate Valdez play quick, loud and bluesy, as if Elvis grew up in the ’70s, sported a studded leather jacket and played punk rock.

On stage, Valdez seems perpetually amused by the sheer amount of power the duo is producing. At one point, Riley falls back into a speaker.

Cadaver Dogs managed, somehow, to push the intensity even further. In the first song, drummer Lex Vegas flings three broken drumsticks into the audience. No one bothers to pick them up. That’s rock ‘n’ roll.

Singer/guitarist Mathew Franklin brings his microphone and guitar down onto the floor so he can sing/yell right into the audience’s faces. Vegas climbs around tables and chairs with his tambourine, eventually landing on the brick barrier separating the two halves of the house — along the way, he kisses me on the forehead.

Back on stage, Vegas plays half the set standing up, as though the sheer force of hitting the drums continually drives him upward. Franklin is a balloon of unpredictable energy, he meanders through rambling stage banter as comfortable (to him) as his t-shirt.

He tells stories — or maybe they’re jokes — before launching into every song. And it seems an effective way to bring the crowd with him to a place where all disputes are settled by spreading your legs wide and playing guitar as fast and as loud as your fingers will allow.

A few Lincoln bands make the journey to Madison, Wis., this weekend to play Bubble Music Festival, a multi-venue urban fest. It’s not unlike Lincoln Calling.

Blét and Freakabout play The Frequency tonight at 7 and 10:30, respectively. AZP plays The Rigby at 10:30 p.m.

Admission is $5 at each bar or $20 for a weekend pass. See the full schedule here.

Omaha singer-songwriter Brad Hoshaw has returned from his annual songwriting retreat in Wisconsin (which we wrote about last year) with a new batch of songs. You can listen to “Next Time” and “Mission Bell” below, two tracks he wrote at the cabin.

Otherwise, Hoshaw has a batch of Nebraska shows coming up:

You won’t lack for show options this weekend:

Tonight, The Lonely Biscuits and A Ferocious Jungle Cat play the Bourbon for $15. RSVP here.

If guitars are more your thing, that same night, Snake Island!, Ancient River, Producers of the Word and the Dancing Dead play Vega. RSVP here.

Sunday afternoon, The Sub-Vectors and All Young Girls Are Machine Guns will play a free show at Miller’s Landing in Omaha for Blues Society’s concert series Music on the Mo. Miller’s Landing is located north of downtown Omaha on the Missouri River. RSVP here.

Bobby Meader Music and I Forgot To Love My Father will play a night of acoustic folk punk at Meadowlark Coffee and Espresso in Lincoln on Sunday. RSVP here.

She Keeps Bees plays Duffy’s Tavern Sunday with Oquoa, Shilpa Ray and Her Happy Hookers. Look for a feature interview with She Keeps Bees later today. In the meantime, RSVP to the show here.