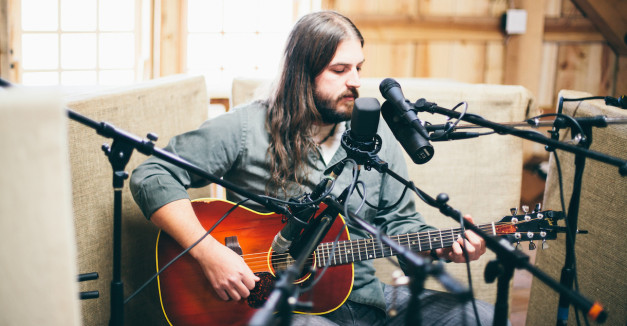 [Editor’s note: This song premiere previews Brad Hoshaw and the Seven Deadlies’ album release concert this Friday, Feb. 21 at 9 p.m. at The Waiting Room. Kyle Harvey will open the show. Cover is $5 advance and $7 day of show. RSVP here.]

When Brad Hoshaw travels to Wisconsin to write, he listens for the songs rolling in the waves of Lake Michigan. In the water’s unfurling, characters live and die. The wind develops their stories, reshapes and folds them until they fall, pushed to the bottom by others.

At a beachfront cabin just outside Sheboygan, Wis., where he works, it was there a few years ago, among the white tips of breaking waves that Hoshaw and three co-songwriters plucked the narrator of “New Tattoo”: a blue-collar worker, dressed in jeans, boots and flannel.

“He probably looks a lot like me,” Hoshaw says with a laugh, before the police sketch artist in his head pencils in more detail.

Beaten down, the man in the song carries heavy stubble, dark brown eyes, a wide jaw and short brown hair.

“He’s worked hard at his jobs, but he’s never had the chance to dive too deep into the emotional side of himself,” says Hoshaw, building the character as if he were sitting next to us at Aromas Coffeehouse in Benson on Saturday. “Rage and revenge are his first reactions.”

His name? Doesn’t matter. More important is the name he’s tattooed on the bottom of his foot, his ex-lover’s. He’ll drive it into the dirt until the tattoo, the physical and emotional pain fades.

This character — sometimes somber, other times angry — has lived a number of lives within the bounds of “prettier” and “almost darker” versions (Hoshaw’s adjectives) performed by co-writers Jeremiah Nelson, Brianna Lane and Brooks West. More recently, the blue-collar worker was born again in a cover by Cursive’s Ted Stevens, played Jan. 25 at Take Cover Omaha. That interpretation, Hoshaw says, was inspiring to hear for how someone could internalize the dark story and make it their own.

“You wonder if it’s going to scare people away, or if it will be too dark that people don’t want to connect with it.” 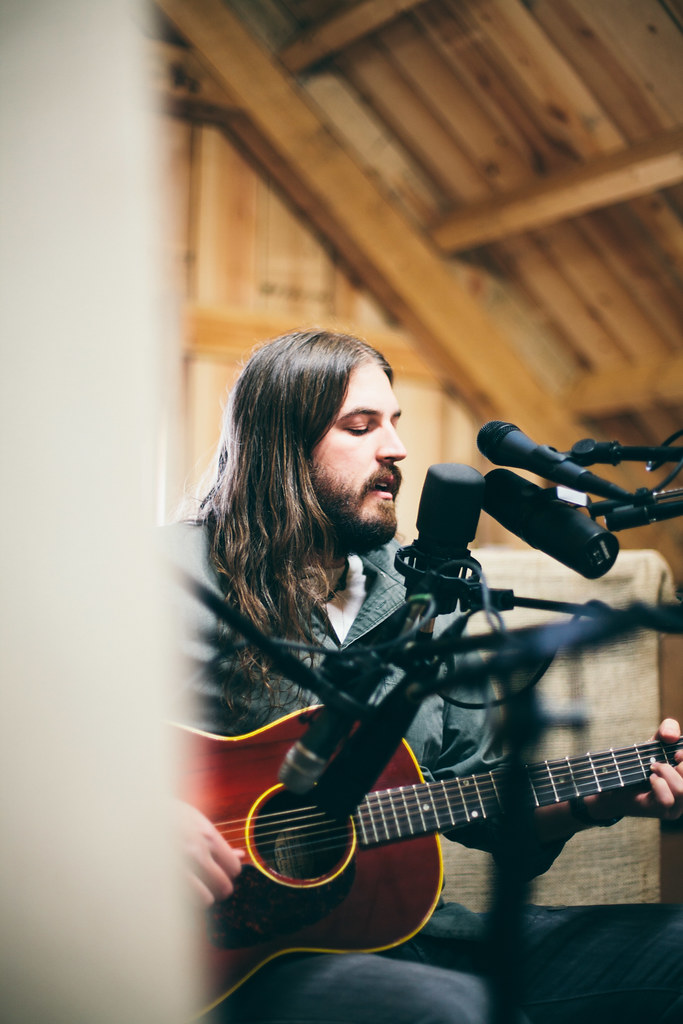 For Hoshaw, the song is tragic, but there is a sense of hopefulness toward the end. The narrator is harming himself the most, he says, but eventually the pain will wear away and he’ll move on.

“That’s what we do most of the time when we’re hurting emotionally. We’ll do things that are unhealthy for us, whether it be drinking or drugs or depression or overeating. All these things we do that hurt ourselves to deal with our sadness,” says Hoshaw, his soft speaking voice belying his strong, steady singing that tapers off deftly with a touch of vibrato.

Coming from a much more personal perspective, the title track of Funeral Guns is emblematic of Hoshaw’s own coming to terms with pain. Hoshaw was estranged from his father, hadn’t spoken to him in two years, when his father passed away. Two weeks later, Hoshaw had a dream in which the music and lyrics for the song “Funeral Guns” came to him fully realized.

“It was basically me and about 10 or 12 people sitting in a small, carpeted room with a band of four or five musicians all sitting on folding chairs in front of us playing this song for us,” Hoshaw says. “It had all acoustic instruments. It was slow and plodding. When the chorus came — ’I’ve fallen prey to a broken heart’ — the whole room started singing together.”

Hoshaw says he understood later that the dream was his subconscious working through his father’s death, part of the process of forgiving him. Compounding the grief that Hoshaw felt, it was discovered after his death that his father had another family.

“It’s still a tough discussion, talking about my dad with my family. I went to see my mom yesterday. She wasn’t too pleased that I dedicated the album to my dad. There’s still a lot of hard feelings there. So I think it was tough for her to realize that I could still have love for him after all the things that he did.”

Hoshaw says that it was his own dark personal story that coincided with the other three co-writers of “New Tattoo” that helped lead the song to its conclusion. After Nelson and Lane had written the opening line — “Darlin’, I’m getting a new tattoo” — the four together simultaneously wanted to push the envelope, Hoshaw says, and see how disturbing the story could get.

“Saying that ‘our love was only below the waist’ is one of the harshest things you can say. We got chills, and we thought, ‘Let’s say it and not be afraid.’”

Having started basic tracking for the record in 2011 — and coming nearly five years to the day after their self-titled debut — Funeral Guns represents the fruition of an incredible goal for Hoshaw and his Seven Deadlies band of guitarist Matt Whipkey, bassist Craig Balderston and drummer/producer J. Scott Gaeta.

Hoshaw is the kind of songwriter who nonchalantly slips in the mention of several albums’ worth of songs that never saw the light of day, “thousands and thousands” of dollars spent on work never released. And his binder full of planning materials for the release show indicates a sturdy workmanship, echoed by a songwriting style that’s bedrocked by piles of starting-point ideas and systematic methods, like poring over the pages of a dictionary or thesaurus that guide him toward more emotional responses.

And when Hoshaw sings the story of “New Tattoo” this Friday at The Waiting Room, the emotional backing of the song might lead him to play a slightly different role onstage. You might just see it in his eyes.

“Every once and while, I catch myself when I’m performing it, just having this extra glare when I’m looking at the audience,” he says. “I just feel this intensity of the character. He kind of edges into me a little bit.”