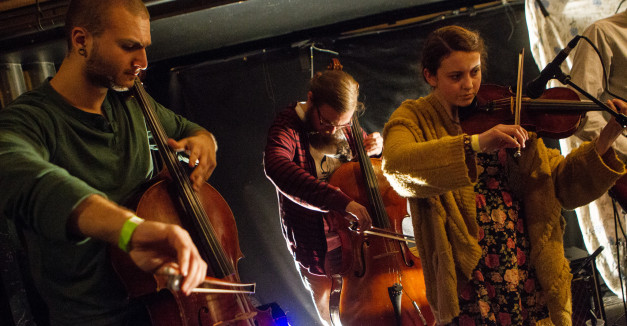 Tonight, The Bourbon hosts the second installment of Lepard’s series Lincoln Modern Music: On the Edge. With a rotating, four-part set — including a cast of UNL students, graduates, faculty and accomplished local musicians — Lepard aims to overlap different styles of music into a new kind of performance.

“I have always been drawn to playing new music that is innovative in some way,” Lepard says. “I wanted to take this passion and bring a new type of concert to Lincoln, where many different performers, styles, sounds, and experiences can be overlapped in a performance.”

The contemporary classical music label encompasses a broad array of styles, but it can most reliably be described as post-modern and experimental. The term could refer to anything from minimalist composers like Philip Glass to the atonal and dissonant compositions of “new complexity” artists like Richard Barrett.

Lepard, a recent UNL graduate, spent his collegiate career devoted to contemporary classical music, throughout that time becoming an accomplished performer. He has premiered music with New York-based Jack Quartet, which places emphasis on new and unconventional types of performance. Lepard has also participated in the prestigious Lucerne Festival Academy, and plans periodic trips to Switzerland this year to work with Tod Machover on a piece with the Young Performance Ensemble.

Tonight’s concertgoers can expect an eclectic mix of performance types, in step with the May 13 debut of Lincoln Modern Music at Crescent Moon. The slate includes individual folk and classical pieces, a jazz ensemble, a Chinese piano piece, vocal arrangements and a closing percussion piece. Musicians include Lepard, Dave Hall, Evan Bartels and vocal soul trio Xión, among others.

“Everyone who comes to this show will hear music they have never heard before,” Lepard says.

Lepard says that he’ll consider the series a success if he can get this kind of performance to catch on, doubly so if audience members make it their own.

“In the modern age, people should be able to make their own experience at a concert, whether it’s to sit towards the back with a drink or a conversation, or stand in the front and be able to cheer and applaud,” Lepard says.

Entry to tonight’s all ages performance is $5 for 21 and over, $7 otherwise. RSVP here.

A week before its release, Digital Leather’s new album All Faded is streaming in full.

Noisey posted the stream this morning, alongside a brief Q&A with frontman Shawn Foree. He talks about the emergence of synth punk, and compares The Faint’s Todd Fink to “an authentic taco versus a Taco Bell taco.”

All Faded drops June 23. Have a first listen of the album here, and see Digital Leather June 27 at O’Leaver’s with Madison punk band The Hussy. The show is part of a cookout that evening with free hot dogs and karaoke. RSVP here.

The Lincoln revivalist rock quartet posted laid-back reggae track “Ain’t Got No Worries” to its website yesterday. The song was recorded June 8 at Transistor Studios in San Rafael, Calif., apparently between tour stops in Mill Valley and San Francisco.

Hear “Ain’t Got No Worries” below. Catch the band at its next local stop in Lincoln July 11 for ZooFest, and again at Bull Market Patio in Valentine for our Good Living Tour.

Tonight, Columbus, Ohio, rock band Cadaver Dogs return to Duffy’s Tavern, performing with Freakabout and Laughing Falcon. RSVP here. Cadaver Dogs released live EP Dogs Bless America June 5, capturing their breakneck live performance. The duo nears the end of their sprawling Midwest “Dogs Bless America” tour, for which Freakabout has joined for a couple of dates. Freakbout has toured hard themselves the last few months in support of its debut LP Don’t We All (read our review of the album here). Laughing Falcon will play Hear Lincoln next Friday.

In Omaha, Denver metal band Of Feather And Bone plays the Lookout Lounge with Vickers and Downtrod. RSVP to the 8 p.m. show here.

Detroit’s Electric Six plays The Waiting Room with White Reaper. Entry to the show is $13. RSVP here. Electric Six originally gained notoriety in 2003 with disco rock single “Danger! High Voltage.” The group trades in a mix of arena and garage rock, sprinkled with disco and funk tones. Electric Six’s eleventh record, Human Zoo, was released in October 2014. The band is currently planning a two-part LP, which will feature half covers, half rarities B-sides.

For a full list of shows, check out our events page here. If you do not see your show or one you plan to attend, feel free to email us at news@hearnebraska.org, or add it yourself via the Contribute button at the top of our homepage.