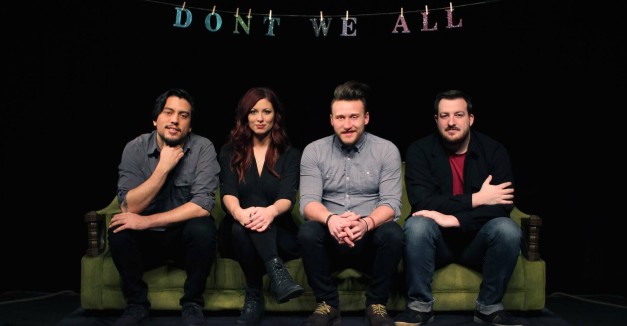 As Cortney Kirby belts “Never Have I Ever,” it’s as though she’s checking off a list during its namesake drinking game. Imagine hearing the third track from Freakabout’s forthcoming album Don’t We All and reminding yourself: Yes, you have once short-sightedly compromised your goals or been “curled up in a bathroom asking what have I done.” Take a drink.

It’s not as though Kirby is merely revealing embarrassing anecdotes; some of these could be dark secrets or negative attitudes that run deep. It almost doesn’t matter whether she plays the game with herself, or employs the phrase as a staunch affirmation of her unwillingness to compromise. In her proclamation that she has never “lost all faith in everything I’ve worked for,” the scenario is so specific that it could be taken literally, or that she could be taking the drink herself. Either way, she cautions that you could either allow those poisonous thoughts to “seep under your skin,” or will them away.

Don’t We All is the band’s first full-length album, which features many of the songs we’ve heard as the band has performed more frequently in recent months. This includes recent dates around the Midwest, as well as a two-month, 26-date tour that kicks off with their album release show this Saturday at Duffy’s Tavern. (RSVP here).

In a live setting, they sound like an oncoming freight-train of weaving riffs and furious percussion with Kirby’s powerful rock-n-roll vocals in the conductor’s seat. In contrast, the production on the record brings a wealth of technical detail to light. Produced at Fuse Recording with Matty Sanders and Tim Kechely, it’s pop-oriented, with the guitars, bass, and drums shrunk back slightly to feature the vocals. They trade a degree of aural onslaught for instrumental subtlety, as well as vocal showcasing. The result melds driving hard rock with smoky blues, all over the undercurrent of darkness and despair.

It’s not as though Kirby is drowned out live by the rest of the band; on the contrary, she holds her own at any volume. On Don’t We All, she’s pushed front and center, showcasing her sultry timbre, anguished vocals. “Blood Red” provides a clear example of this approach from the very start. Kirby sings the chorus a cappella as an intro, admitting being stricken with “the curse of being too damn lazy.” Tension builds as guitarist Aaron Galvan strums out twangy minor chords, and then the band kicks into overdrive through the rest of the verse and into the chorus. When she sings “the guitar is my shield,” she crescendos to the point where it would be unsurprising to hear her substitute “my shit” — not only because her voice draws Gwen Stefani comparisons. Kirby conveys the feeling of your favorite pop jam coming on the jukebox. She seems to relish the catharsis induced by booming her problems and insecurities, even as the songs mourn them, through both lost love and self-affirmation.

“Blood Red” also highlights the instrumental depth on the record, some of which might be lost during the live show. The song’s organ outro gives it an actual haunting or ceremonial quality, as if they mean to ritualistically sacrifice their demons on the spot. Kirby might be conducting a seance on “Garden Of Skulls,” which hazily opens with Zach Zoellner’s pounding rack toms and progresses through Galvan’s searing leads. The song climaxes with Kirby howling of “in the garden of skulls!” as though she were Bruce Dickinson fronting Iron Maiden.

“In This Mess” allows a touch of sunlight through, with bassist Alex Drvol’s grooves setting the upbeat mood and pace. “Na Na Na Na” begins as though Galvan’s shimmering guitar chords are underwater, then emerging from the water like a submarine into a jumpy Aerosmith-esque riff.

At its core, Don’t We All is a dark, detailed record that not only accepts common human flaws (as the title alludes to), but dances wildly in their presence. There is certainly company in the darkness.