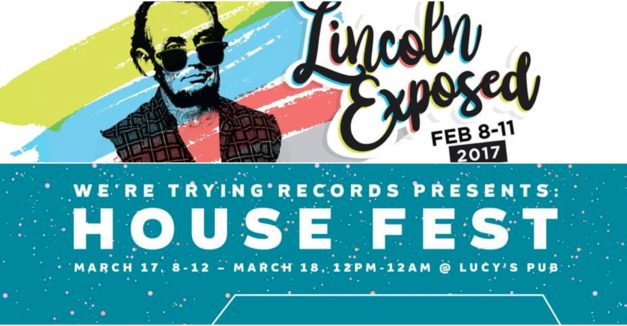 The downtown Lincoln concert event which celebrates the city’s local music acts is back for a 12th year.

Lincoln Exposed has shared the lineup for its four-day festival featuring all Lincoln bands. More than 90 acts have been confirmed to play in five downtown venues Feb 8-11.

1867 Bar is new to the venue roster, joining last year’s hosts Zoo Bar, Duffy’s Tavern, The Bourbon and Bodega’s Alley. It is the second-straight year the event has featured a new venue after adding a revamped Bogeda’s in 2016.

View the full listing of participating bands below. Day passes are $8 for Wednesday and Thursday, $10 for Friday and Saturday, while the full weekend ticket is $25. RSVP here.

The label has announced the inaugural House Fest, which will feature local and regional indie rock acts on two “stages” at an Omaha house show venue near 90th and Maple. The two-night event is set for Friday and Saturday, March 17-18.

Performances will take place in both the garage and the basement of the house, with all proceeds from the $5 cover to benefit a charity to be chosen via community poll, which can be found here. Label founder Jordan Hiebner, a Nebraska ex-pat and former HN marketing intern, says the setting will allow younger music fans to attend, and help showcase up-and-coming talent.

“I’m excited about the House Fest because I developed my passion for music and was given a ton of opportunities to follow that passion by several different people and companies in Omaha,” Hiebner says. “I’m excited to host an event and bring in regional bands so they can see how great the scene in Nebraska is.”

Find a list of participants below and RSVP here.

Lincoln blues/rockabilly duo The Time Burners already are hitting it hard in the new year after a busy 2016, and they have invited a few guests to join the party.

Memories comes on the heels of a pair of 2016 albums for The Time Burners. They released a Christmas EP in mid-October and original full-length Long Winding Road in February. That makes three in three years, with their December 2015 self-titled release.

Purchase the new album here, and listen to its title track below: