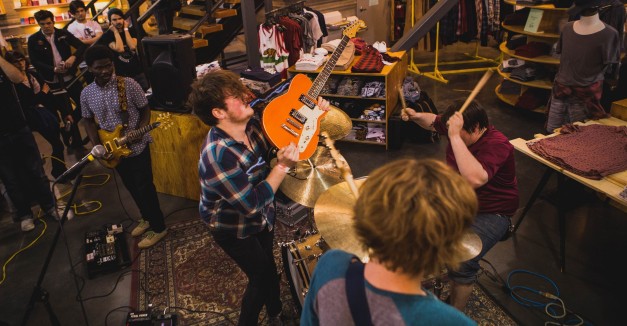 After spending the better part of last summer working at record labels, Nebraska ex-pat Jordan Hiebner has started one of his own.

“Neither I nor the bands are financially stable enough to go it alone, so the hope is that our resources together can make it work,” says Hiebner, a former HN marketing intern and programming assistant.

Hiebner, who now lives just outside of Austin, Texas, says doing marketing work for Make Believe, Sower and Silver Street records gave him the itch to assemble his own. He’s had some help, with Omaha designer Cody Fenske running graphics for his website. But the weight has fallen largely on Hiebner’s shoulders.

“For the most part, it’s been me googling stuff to figure it out,” Hiebner says.

“We get to keep working on our music as if we were independent but we get the special aid of having professional help on future stuff,” Newbold says.

I Forgot To Love My Father will join Super Ghost on the fledgling label. The project of JP Davis (another former intern) has blossomed from acoustic act to full band since Davis released a split cassette with Lotus Leaves in Dec. 2014 on Fantastic Cassettes. He plans to record a new single and subsequent EP with We’re Trying.

“I’ve grown up in and around DIY music scenes,” Davis says. “One thing I’ve always loved about it is collaboration. ‘Doing it together’ warrants room for collaboration.”

“Someone was being shitty and I basically kicked them out of my life,” Newbold says of the song. “Then that shitty part caught up with them and they got themselves into some bad situations. I feel like it is just as much my fault as it is theirs because I should have told them or helped them change in some way.”

The University of Nebraska-Omaha’s School of Music has announced the calendar for its 2015-2016 Petite Musique concert series, which features an April residency with critically acclaimed Amernet String Quartet.

The chamber music concert series begins Wednesday, Sept. 9 with Omaha Symphony’s John Klinghammer and Christi Zuniga performing selections from Saint Saen, Spohr and Messager on clarinet and piano. The concert starts at 7:30 p.m. in the Strauss Performing Arts Center Recital Hall, and is $10 for adults, $5 for seniors and free for seniors. RSVP here.

Other notable dates include an Oct. 8 poetry reading by Nebraska poet laureate Ted Kooser, and Broadway star Kimilee Bryant giving her concert performance “Broadway and Beyond” on Nov. 13.

UNO’s Petite Musique series culminates in the April 8-10 chamber clinic, taught by the Amernet String Quartet. The quartet’s residency includes a few master classes and multiple public and private performances throughout the community. See the full schedule below, and visit music.unomaha.edu/petitemusique for more details.

Over at The Waiting Room, Shane Henderson, formerly of Philadelphia pop-punk band Valencia, will play that band’s 2008 LP We All Need A Reason To Believe in its entirety. The band’s Columbia Records debut was cut in the wake Henderson’s girlfriend’s death in a tragic car accident in 2007. At its peak, Valencia was playing packed dates with the likes of Fall Out Boy. Alli and I and The Sharp Young Men join tonight’s billing. RSVP to the 9 p.m. show here.