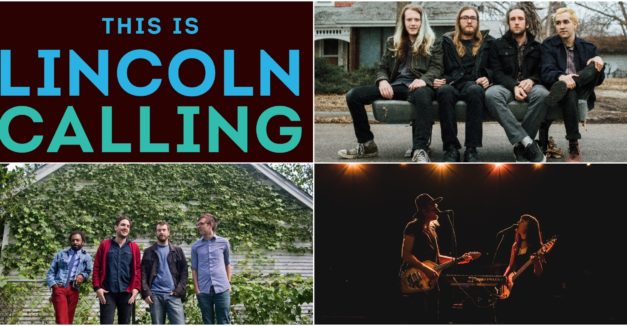 Nearing the one-month Lincoln Calling countdown mark, and everything is coming together.

We have added more than 25 bands to the Lincoln Calling lineup, pushing the number of talented national and regional acts past the century mark. And now, you can see where all of them will perform during the three-day music festival.

There’s more great news, as we can now share the venue-specific lineups for each night, so you know where to find the acts you want to see. Best Coast (Thursday), Angel Olsen (Friday) and Charli XCX (Saturday) will cap performances at The Bourbon, one of eight indoor and outdoor venues that also includes The Bay, Duffy’s Outdoor and Indoor, Zoo Bar, Bodega’s, 1867 Bar and the Lincoln YPG Night Market stage. See the full lineup here.

A rapper calls-out fake friends, a folk artist faces an ending relationship and an indie rock band escapes from the cops — all in a trio of new music videos out this week.

First up, Lincoln rapper RubyRay pulls no punches in “Fall Off,” the new single and accompanying visual. The track lashes out at late-coming fans who support artists only when it’s beneficial for them. RubyRay Loyalty is important to the rapper, who grew up in a struggling household with seven children. So when he spits the lines “every single thing I got, I had to earn,” his personal history and forceful tone come off as genuine — and motivated.

“All that hardship just made me hungry and music was my coping mechanism,” he says.

“Fall Off” is the first taste from a forthcoming mixtape, made with local producer Doe Doe (Scru Face Jean). Watch the video below:

In “Let Me Down Easy,” Lincoln singer/songwriter Andrea von Kampen sings of a relationship in post-deterioration. The drawers are empty, the driveway is vacant and the narrator’s significant other has left her with only reflections. In the new video, directed by Carter Knopik, those memories take the form of home video and photo album, images that conjure the joy of a life passed and the heartache drifting in its wake.

The song appears on von Kampen’s latest EP Desdemona, which dropped in December 2016. It also happens to be the song she submitted to the NPR Tiny Desk Concert Contest last year, and the song that landed her in the contest top 10.

Watch the new video below.

Finally, The Way Out released the first single from their forthcoming debut LP today via video. “Cops” is a poppy and snappy two-minute run-from-the-cops anthem with a slight twist. Vocalist/guitarist Mari Crisler would be daydreaming about impressing a potential partner, but the police appear at every turn, thwarting a show or a bike ride or a speedy joyride. The video itself evokes the same kind of anxious feeling one might get from flashing lights in the rear view mirror.

The Way Out’s debut album Automatic Writing is out Saturday, Sept. 9. The band plays at The Bay that evening to celebrate with Uh Oh, Centerpiece and Mad Dog & the 20/20s. RSVP here.

It’s a big weekend for shows and events, and we’ve culled some of the most intriguing for the concert round-up. Find a fuller listing here, and add your own in the comments or to the calendar via the “contribute” feature here.

Hear Lincoln: I Forgot To Love My Father at Black Circle Records – Hear Lincoln keeps on rolling this week with a special rooftop show at Black Circle Records in downtown Lincoln. Lincoln indie group I Forgot To Love My Father will headline. Read a recent HN interview with the band’s frontman JP Davis, where he talks about the project’s evolution here. 5 p.m. The event is all ages and free. Follow @hearlincoln for updates.

Back 2 School Party with Linear Symmetry, A Ferocious Jungle Cat and Kenny Barz at the Bourbon Theatre – Omaha dance group Linear Symmetry, Lincoln thunderfunks A Ferocious Jungle Cat and Lincoln rapper Kenny Barz will play the Bourbon’s Back 2 School Party. The show is $10 advance and the day of the show, but is only $5 at the door with a student id. 8 p.m. 18+, there is a $2 minor fee at the door.

Third Annual Skate Art Music Festival at the Railyard – The Bay and 106.3 KFRX present the third Skate Art Music Festival this Saturday at the Railyard. This year’s event includes Skate School in the Railyard, interactive murals, an invite-only skate competition and live music throughout the day. Check out the full lineup and schedule here. Music starts at 2 p.m. and features CJ Clydesdale Band, M Shah, The Grand Poobah, Khari the Duo and Both. 10 a.m. The event is all ages and free to the public.