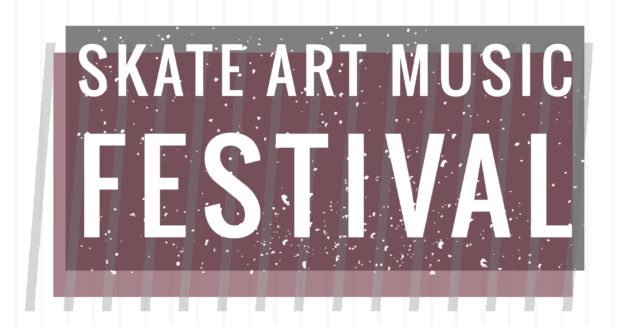 Lincoln nonprofit The Bay is bringing its three-pronged cultural focus — skateboarding, art and music — out of the building and into the Railyard.

The Bay’s third-annual Skate Art Music Festival happens this Saturday, packing three creative mediums into Lincoln’s outdoor entertainment district for an all-day extravaganza that features local musical talent, a local artistic display and the best regional skaters around. The event, free and open to the public, is a crown jewel of The Bay’s mission to empower young creative people.

“Our hope is that this event inspires the skaters, artists, and musicians – and provides a platform for them to do what they love with all of the midwest watching,” says The Bay founder Mike Smith in a statement.

Skate Art Music Festival kicks off day-long skate programming at 10 a.m. with its free Skate School, and continues from 2 to 6 p.m. with an open competition. The main, invite-only throw down starts at 7 p.m. and features 38 competitors from Michigan, Missouri, Colorado, Iowa, Minnesota and Nebraska. The jam-style competition will award $3,000 in cash prizes and, if last year is any indication, should be an absolute blast to watch. 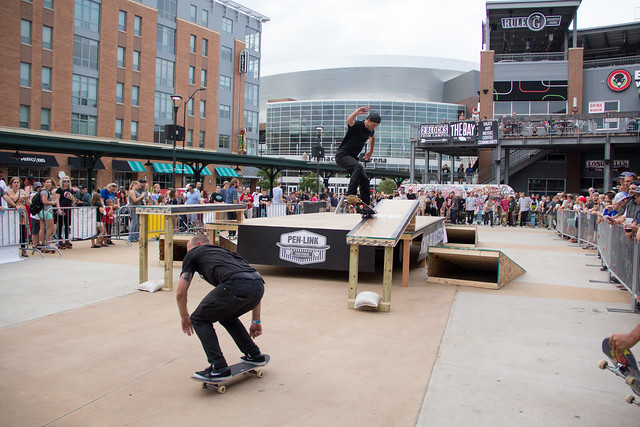 Throughout the day, the festival will showcase several local musicians on the Railyard’s outdoor stage. CJ Clydesdale Band starts things off at 2:00 p.m. At the same time, The Bay’s #BayAuthenticSeries mural project, which assembles a collage of digital art submitted by hashtag, opens for viewing. Music continues from 3-7 p.m. with rapper M Shah, art rock band The Grand Poobah and new act Khari the Duo. Omaha hip-hop duo Both closes down the festival and announces skate comp winners starting at 9:30 p.m.

While Skate Art Music has been around since 2015, it’s part of what has been a renaissance for the Lincoln nonprofit. In addition to its family and youth outreach components and indoor skatepark haven, activity has ramped up at its music venue and the coffeeshop just recently began its baking operation. 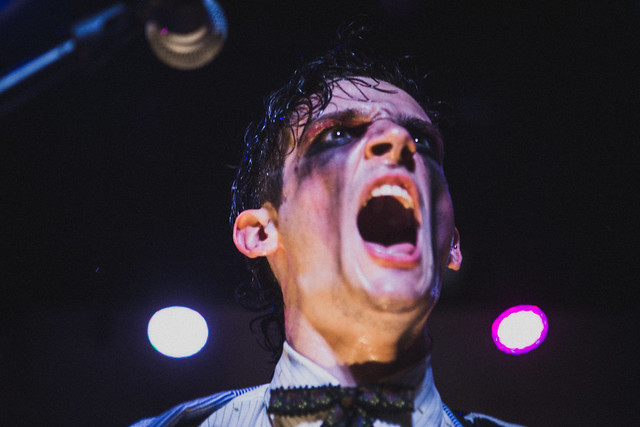 By Jamie Vassar | photo by Lindsey Yoneda for Hear Nebraska

There are some bands you just have to see live, those that value an experience-driven show that considers far more than just the music, but also the physical way its feeling can be conveyed.

Lincoln indie group I Forgot to Love My Father taps into that sweet spot. Whether it be crowd surfing at a coffee shop or sporting heavy metal gear to play bluegrass, the band creates balance between boundary-pushing showmanship and thoughtful musical arrangement. Frontman JP Davis’ offbeat, exuberant vocal performances play well with the seven-piece band, gushing layers of guitar, violin, percussion and trumpet. Together, they offer a potent yet carefully-crafted blend of introspection and sonic extroversion.

“It’s a tough balance,” Davis says, “It’s a constant battle of me wondering if I’m being too upfront on stage or not upfront enough.”

I Forgot to Love My Father will take to the roof of Black Circle Records for this week’s Hear Lincoln concert in coincidental but fitting move for the series. Hear Nebraska caught up with Davis to discuss building his solo project into a small orchestra, balancing their live performances and a rock-star night at Meadowlark Coffeeshop.

Hear Nebraska: I Forgot to Love My Father evolved from your solo work. Although much of the themes remain the same throughout both projects how did you decide to make the full band a forefront?

JP Davis: Well, as you know, it started out just me and acoustic guitar. Then I met my friend Becca Delay while we were working at Firehouse Subs in high school, she’s a great cellist so we started playing together. She went on to do great things. I added Robert [Specht], our current bassist, on cello for some shows. Marina [Kushner] on violin sometimes. They both stuck around and I realized the songs sound way better with lots of talent accompanying them…so it stuck.

HN: There’s an irreverence to your live performances but your music often involves themes of anxiety and longing. How do you balance content and stage presence?

JD: It’s a tough balance. It’s a constant battle of me wondering if I’m being too upfront on stage or not upfront enough. Maybe that explains the stark differences in the themes of our songs. “The Country Boys Love Tune” is one I can get down and jiggy with, no afterthought. “I understand, I can’t,” is one that usually sends me into a 4 minute spiraling descent into madness. It’s a good contrast. We only have sad or happy songs pretty much. Haha.

HN: A lot of I Forgot to Love My Father’s available recordings are either in video format or from your 2016 live performance EP. How do you think having this raw element to your work so far acts to identify the group?

JD: We’ve began to access this huge wave of sound that we really like. It’s a sound and feeling that only really comes about during live performance. I can feel every band member funneling their souls through their instruments. That’s what makes this sound, and it’s not necessarily something that can be achieved say single tracking in the studio. We are going to be experimenting with the live tracking technique for our next release.

HN: To our knowledge, you’re the only frontman to crowdsurf a coffee shop gig. What was that experience like? What have been some of your favorite parts about interacting with IFTLMF fans along with introducing yourselves to new audiences?

JD: I was pretty stoked to see over 80 people show up to a gig in a coffee shop. The folks at the Lark were nice enough to accommodate the crowd by moving all the tables to the side of the room. It’s like they were asking for some wild shit to happen. I think it’s spontaneous moments like that that keeps this band interesting for me. I think other people are catching on too. Lots of young people too. I saw this dude, John, get pulled up on stage at the Green Day show the other night and he shredded on guitar. I saw him after the show and congratulated him and to my surprise he asked when the next IFTLMF show is. It’s great to see kids so into music and counterculture. I love them with all my heart. Our future will be run by these little freaks, and I can’t wait!

Porchfest OMA will become one of more than 20 similar events that have cropped nationwide since the very first one happened in Ithaca, N.Y., in 2007. Festival organizers – E3 Music Management and Omaha musician Ben Baldwin — say they were inspired by the success of last year’s (otherwise unrelated) Lincoln edition.

Music runs that Friday evening from 5-10 p.m., with the official after party at Down Under Lounge, 3530 Leavenworth St. The schedule is forthcoming; RSVP here.

Today in new music, new Lincoln-based political punk band Justified Aggression dropped its debut EP Constant Struggle in somewhat of a surprise fashion over the weekend. Vocalist Jacob Darling says the decision to hasten its release was spurred by the current sociopolitical climate, hot from recent clashes in places like Charlottesville and Boston between anti-fascist protestors and white-nationalists over the removal of confederate monuments.

“In light of this and recent events we feel there’s no better time to put our anti-fascist, anti-capitalist, anti-imperialist message out there,” Darling says.

But wait: there’s more! Lincoln post-punk band Better Friend dropped “Tinker Toys,” the raging second single from its debut LP Just Turn Green, which drops this Friday. In the song, vocalist Meghan Munyon lashes out at a fear-driven religious upbringing while guitars spin and drums slam behind her.

Just this morning, we published an audio interview with Munyon, in which she talks about the new album, the band’s bonding (and arguing) and why their live shows are so important to her. Listen here.

Our picks for the next couple nights are below. Leave your show in the comments or submit to our events page here.