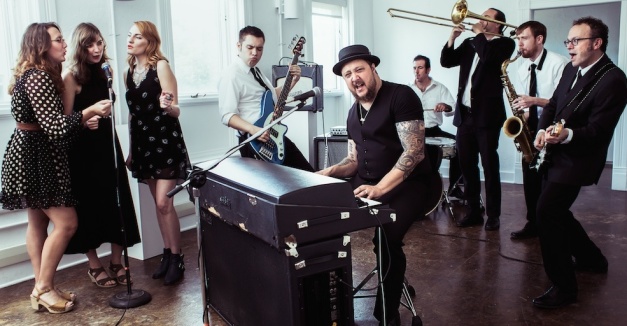 After a double dose of film festivals last night at The Bourbon, the music portion of Lincoln Calling kicks off tonight.

X-Rated: Women in Music, a radio program on KZUM every Thursday afternoon, hosts a lineup tonight at The Bourbon featuring Churls, Lars and Mal, All Young Girls Are Machine Guns, Baberaham Lincolns and more. Hard rock beings the Duffy’s wing of the festival, with Domestica and Laughing Falcon, among others. The Melon Company finishes off a soul-centric lineup at The Zoo Bar, and Audbawl tops the EDM billing at Mix.

One of Nebraska’s premiere funk and soul groups, Josh Hoyer and the Shadowboxers will release their second full-length on Nov. 7 at The Bourbon and Nov. 8 at The Slowdown.

The band’s self-titled debut, which released in January 2013, spent a considerable amount of time near the top of Roots Music Report’s soul chart and garnered the band nominations for Best New Artist from Blues Blast Magazine. Last year, Hoyer and crew won Best R&B/Soul at the Omaha Entertainment and Arts Awards.

The record’s first single, “A Man Who Believes His Own Lies,” will release Nov. 4.

Ashland’s Silver Street Records will release Living By The Minute. Hoyer and company recorded at Mike Mogis’s ARC Studios. In the press release, Hoyer touts the album’s “richer” compositions and its increased space and freedom for all of the band’s nine players.

After the album release, Hoyer and the band will head on a two-week west coast tour. According to a press release, the official Living By The Minute tour will head south in January.

After a near 10-year hiatus, Dinosaur Jr. reconvened late in the ‘00s, and have since released three albums. Led by Mascis, the band heralded the sounds of distorted garage rock.

Mascis is touring August’s Tied to a Star, his second proper solo record after 2011’s Several Shades of Why.

Tonight, the Swedish violin duo Duo Gelland will perform a free show at the Sheldon Museum of Art (on the University of Nebraska-Lincoln campus).

The two have made a name for themselves presenting uncommon historical arrangements. They often perform works from the turn of the 18th century, when pieces for stringed duos were arranged and printed as often as music for string quartets and orchestras. Today, very few groups exist to play such pieces, so a Duo Gelland show presents music scarcely performed otherwise.

Swedish coffee and pastries will be served at 6:30, and the hour-long performance begins at 7 p.m. RSVP here.