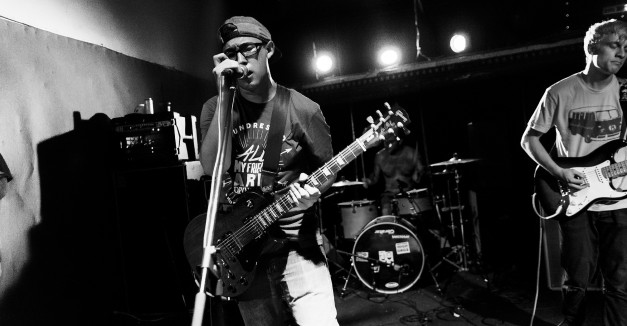 In its second major announcement in as many days, Josh Hoyer and Soul Colossal are set to release live album Cooked Raw on Silver Street Records. The one-take LP was recorded at analog-centric Welcome to 1979 Studios in Nashville in June of this year, and will drop on Nov. 6.

Cooked Raw features two 18-minute live sets recorded direct to disc. For the unfamiliar, that recording method allows room only for mastering the real-time take, with no room for added tracking or editing. Essentially, all of the nuances and details of a live take are captured as is.

This news comes on the heels of a name change for the former Shadowboxers. The band announced the change to “Soul Colossal” earlier in the week, and will continue to tour and record under the new moniker.

Josh Hoyer & Soul Colossal will play the album in its entirety a private release show at Welcome to 1979 Studios on Nov. 6, and will return to Lincoln for a to-be-determined hometown celebration. Pre-order the album here, and view the complete tracklisting below:

1. Living By The Minute
2. Blood And Bone
3. Misfit Children

4. Every Day and Every Night
5. Illusion
6. Make Time For Love

No Tide has ratcheted up an already prolific career this year, maintaining a regimented, hard-touring schedule and releasing its first full-length LP, Death Of The Sun, in June on Take This To Heart Records. The quartet heads out on a Midwest tour beginning Sept. 2 in Oklahoma City, joined by labelmates Thieves.

Just before their release show in mid-July, we visited the the band at a Sunday evening practice. The Lincoln-based three-fourths of frontman Will Conner, bassist Roeby Hauf and drummer Sean Murphy (guitarist Carter Brown commutes to tour from Michigan) discussed the necessity of keeping a busy calendar and the challenges and rewards of writing a full-length album.

Read our feature with No Tide here, and RSVP to the free concert here. As always, Hear Lincoln is sponsored by the Cooper Foundation, presented by the Lincoln Chamber of Commerce and promoted by media sponsor KZUM.

Brooklyn-based producer and Lincoln ex-pat Darren Keen is planning a trip back to Lincoln with a new record in tow.

On Aug. 28, the former The Show Is The Rainbow and Touch People artist will release 12” LP He’s Not Real on Columbus, Ohio- based Orange Milk Records. According to Keen, the album incorporates African polyrhythms and footwork grooves into his progressive bass music style.

In support, Keen will set out on tour Sept. 8 with labelmate Giant Claw. The pair will swing through Lincoln on Sept. 10 and Omaha on Sept. 13. The latter is a show at O’Leaver’s with Channel Pressure, the project of Reptar’s Graham Ulicny and The Faint’s Todd Fink (RSVP here).

Keen was also recently quoted in multiple articles, most notably from Rolling Stone, about his incorporation of footwork grooves and his particular style. Read the Rolling Stone article here, and read his album announcement via Fact here.

Keen’s upcoming tour dates are listed below. In advance, hear lead track “The Way I Look.”

The Universe Contest machine is churning back to life with the announcement of a late-August tour.

Less than two weeks later, the ever-evolving Lincoln prog rock band will join indie rock veterans Built To Spill and Idaho garage rock band Clarke & the Himselfs at Vega on Sept. 11. All of that amounts to a tightly packed schedule for Universe Contest, after laying low in basements shows and practice spaces for the past few months.

See the full tour schedule below (still unsure of whether to bring my mom):

Do-It-Ourselves Fest kicks off this evening in Lincoln at SP CE Commons, with DIY workshops and live music all weekend. Workshops start at 5 p.m. and run until 10 p.m. The live music slate starts tomorrow evening at 5 p.m. Watch later today for our preview, including a complete schedule. RSVP here.