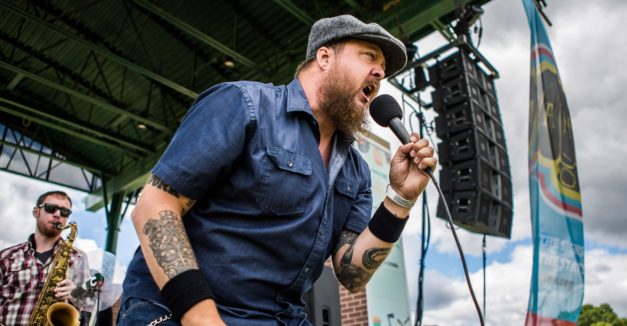 Josh Hoyer has made himself a Nebraska music mainstay through infectious grooves and his powerfully soulful voice — one that will soon be nationally televised.

The Soul Colossal bandleader will appear on the newest season of NBC’s vocal music competition The Voice, which debuts Monday, Feb 27. Hoyer confirmed earlier this week via his Facebook page after fans recognized a brief shot of him in a recent commercial spot. He released a statement explaining a music industry friend encouraged his auditioning, and the opportunity appealed to him.

“I felt it was a cool way to possibly reach a wider audience and share our distinct brand of Soul, Funk and R&B, which is founded on the principle that music can encourage, empower and connect people to fight the good fight,” Hoyer said in the statement. “Music is a common thread in the fabric of humanity across the globe, and I am honored and humbled for this opportunity to share Josh Hoyer and Soul Colossal’s voice with anyone and everyone that can hear it.”

Hoyer is the second Lincolnite in as many seasons to appear on The Voice. Last year, Hannah Huston rode an impressive voice of her own to third place in the competition (get some insight into her experience here).

Soul Colossal’s reach will extend beyond the national TV audience when it embarks on a 31-day European tour next month. The seven-country, 28-show trip is the band’s first abroad. See full dates here.

See if you can spot Hoyer in the trailer here.

You never know what you might get with Early Afternoon Tonight. As a podcast variety show in the late-night mold, it’s quirky, whimsical and drenched in sarcasm. Host Karl Houser and crew discuss topics ranging from the mundane to the weighty, all with a tinge of snark that keeps its mood light and engages guests.

The Omaha-based podcast just posted its 18th weekly episode this past Sunday, featuring writer Beaufield Berry and The Toppings vocalist Alyssa Bahler. In their raunchy and irreverent conversation — indicative of the show’s general tone — they send-up white entitlement, discuss a drunkard at a recent Toppings show and yell wildly at each other.

Founded by Houser and Omaha musicians Nick Miller and Eric Day and launched in September 2016, its mission is to showcase “Omaha’s notable citizens and musicians while providing a hearty laugh.” It has recently featured musicians like Emily Ward, Aly Peeler, Ragged Company’s Adam Houghtelling and Tiny Monsters’ Ben Baldwin.

While Houser is the voice of Early Afternoon, Day and Miller help drive the show forward. As its booking agent, promoter, social media editor and manager, Miller is the podcast’s glue. The native Nebraskan harbors a passion for its music scene through his time with Day in now-defunct band Calling Cody. For his part, Day is Early Afternoon’s audio engineer. He’s the man behind the interjecting synth, the show’s theme song and its mixing and mastering. The show also employs graphics and video expert Adam Slechta, writer Alyssa Elwood and “studio audience” Jessica Freeman. And they all play Houser’s willful punching bags.

Listen for yourself below, and catch up with all Early Afternoon episodes via its website here.

“Crum, your new stuff’s a little too real,” J. Crum raps spiritedly in his new video. It’s a bold move, at once filling the shoes of his naysayers and feeding off his own energy.

The Omaha rapper has released the one-take music video is for his song “Anti-Establishment,” off his second full-length album, Black Sheep. Shot in an urban Omaha parking lot, it sets Crum’s emphatic delivery against color-changing architecture, which pops in the background beneath the night sky.

Some of the song’s lyrics are emphasized in a chalk-like font over the video, including a line where he reiterates the severity of his message: “I ain’t came to play.” The Christian rapper overtly reveals his hopeful message in the third verse, where he states, “Positive vibes is what the hood needs, a lot of people burning who did a lot of good deeds.”

Crum has been nominated for both ‘Album of the Year’ and ‘Best Hip-Hop Artist’ in this year’s Omaha Arts and Entertainment Awards. His next show is February 23rd at Slowdown with Sons of Rome and Brett Cory; RSVP here.

Watch his new video below.

Find more shows for tonight and beyond at our statewide calendar here. Have new music, tour dates or other news to share? Email the details to news@hearnebraska.org.