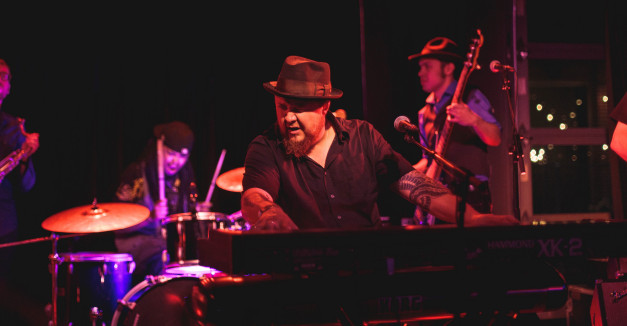 After spending most of last year on the road and in the recording studio, Josh Hoyer & Soul Colossal have a release date for the fruit of its efforts.

The Lincoln soul band confirmed Running From Love will release April 8 on Silver Street Records. It was produced by Ken Coomer (Wilco, Uncle Tupelo) and marks the band’s third full-length studio album in as many years.

Soul Colossal’s prolific output extends to more than 150 concerts in 32 states last year, plus the November release of live, direct-to-disc album Cooked Raw. It looks to ride the wave in 2016, with nearly 60 dates already scheduled around the Midwest, South and up the Rocky Mountains. It isn’t stated outright, but one can assume the April 1 and April 2 dates at the Bourbon and Slowdown will serve as album release dates and supporting tour kickoff (update: Silver Street’s Charlie Hull confirmed this).

Read more about the album here, and view the entire tour listing here.

In a recent video, Scheuerman films himself constructing a “solution” — the titles of his songs in numbered order — at his home practice space. It starts with his soft humming into the microphone, looped and distorted over a minimalist beat, and continues droning onward. In a way, his vocal style and track building recalls some of Thom Yorke’s solo work at its outermost fringes.

Big Slur performs tomorrow night at Slowdown with Those Far Out Arrows and The Sub-Vectors (RSVP here). Check Scheuerman’s video below (and read our Q&A with him here):

Nebraska City’s nationally renowned arts center is again looking to help aspiring artists get a jump start on their work.

The Kimmel Harding Nelson Center for the Arts is now accepting applicants for Session Two of its 2016 artist residency program. It will award approximately 35 residencies to visual artists, writers and interdisciplinary artists from across the country for two-to-eight week session between July and December.

The Center provides a comfortable setting in which to create. Artists selected for the program are provided ample accommodations, private studio space and a weekly stipend. All residents have private bed and bathrooms, with shared living and kitchen space.

The application deadline is March 1. Nebraska artists and those transitioning from graduate school receive special consideration, according to the Center’s website. Apply here.

HN multimedia intern Adam LaRose stopped by Milk Run last night for the latest edition of experimental music series CounterSOUND. In his words, it was one of the weirdest shows he’s ever been to, which we’re into. Good on the Perpetual Nerves crew for showcasing the experimental side of the scene.

Tonight, Omaha duo Skyloft plays Slowdown’s front room with Des Moines, Iowa, singer/songwriter Bonne Finken and Mason Michaels. The electro-pop project comprising Anthony Flaukus and Tyler Lewis is relatively young, having formed summer last year. They are currently at work on an album which they hope to release later this year. RSVP to the show here.

Don’t forget to save the date for the second of HN’s Fifth-Annual Take Cover concerts. The show heads to Omaha’s O’Leaver’s Saturday, where 14 Nebraska bands will each reinterpret/cover a song by an influential Nebraska musician, plus one original. Nebraska comedian Ryan de la Garza will host. And proceeds help support HN’s paid internships! Rsvp to the show here.

[Editor’s note: an earlier version of this article inaccurately described the CounterSOUND series as “ambient.” It has since been changed.]