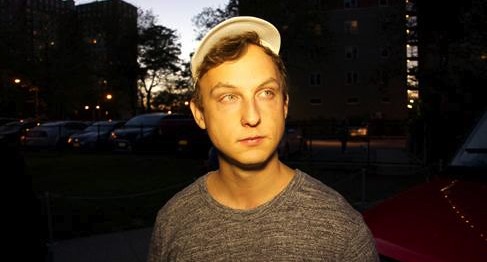 Washington D.C.’s Deleted Scenes called it a day in August of last year, and frontman Dan Scheuerman still had a lingering tick. The now-Omaha resident was always interested in capturing the chaotic, unpredictable essence of demos that eventually filtered through studio recording. Even experimentation in that setting couldn’t prevent adulteration.

“The result of that was recordings that weren’t true to the live sound of the band, the band members who crafted the performances, or the original impetus of the songs,” Scheuerman says of the first two Deleted Scenes albums. In the wake of its disbandment, he found the proverbial back-scratcher for that itch in an experimental electronic project called Big Slur.

Big Slur hasn’t seen the light of day very often, aside from roughly a year’s worth of YouTube postings. Tomorrow, Scheuerman will play the tenth installment of local music series FITNESS at O’Leaver’s with fellow sound experimenters Bus Gas and ridgelines (RSVP here). It will mark just his fourth public show as Big Slur.

One of the qualities (and, possibly, charms) of an unencumbered creative process is the distillation down to pure energy, and it shows in Scheuerman’s work as Big Slur. It starts with a morsel of sound — often his voice — and building around it using an open-source controller called a Monome. The process yields swirling, disorienting yet strangely organic waves of mechanical sound, like being trapped in an HVAC system, thrust into a vacuum or locked in a reactor meltdown.

If there’s any way to relate this work back to his former band, these tracks (titled “solutions”) almost create themselves out of that vacuum. Unshackled from what Scheuerman calls “the preciousness of studio recording,” they blossom into instrumental echoing shouts, achieving the distillation that a studio album makes nearly impossible.

Before tomorrow’s show, we caught up with Scheuerman via email to discuss Big Slur as a creative outlet, his approach to using a Monome and the free-flowing nature of his recordings.

Hear Nebraska: I see these songs as cousins (however distant) of your Deleted Scenes work. Do you see them as outlets for creative overflow? Is there any overlap, in your mind? How do you approach them?

Dan Scheuerman: These don’t have much in common with Deleted Scenes, except they scratch an itch that I had forever with that band. I often felt that the original demos of Deleted Scenes songs had a certain chaotic magic that, when translated into a band-on-the-road environment, and then back into a studio thing, was lost. For the first two albums I tried really hard to rediscover the chaos and textural volatility of the demos through studio experimentation, but the result of that was recordings that weren’t true to the live sound of the band, the band members who crafted the performances, or the original impetus of the songs. (On the last album, Lithium Burn, I let all that go and just wanted it to honestly represent the personalities and contributions of the band members.)

These compositions exists purely in the state of their original conception, distilling what I love about the creative process and dispensing with the preciousness of studio recording, I sometimes cut them down after the fact for posting on YouTube, but everything heard on them was created at-once. It’s process music that has more in common with the practice of automatic writing. Deleted Scenes was often the opposite – very tightly choreographed, carved, and meant to be monolithic and “necessary” in the manner of MacLeish’s “globed fruit.”

HN: These tracks sound like they’re evolving as you’re recording them. How much of what you’re doing is predetermined and how often are you improvising?

DS: Nothing is predetermined except for the technological limitations.

HN: This is typically a silly, stay-away question, but I’m interested in the titling of each track. What is the unifying theme in your mind that makes them all “solutions”?

DS: Calling them Solutions anonymizes them and starts to indicate that they are responses to a self-imposed problem, and that they exist only in relationship to the context they were created in. The term “Solutions” is one I come across a lot in my day job in an architecture firm. People sometimes refer to buildings, places where people live and work, as “architectural solutions.” It always drove me crazy as a term, because it rips out any passion from the work and indicates that the building is just one of a number of possibilities—something that doesn’t really matter.

With Big Slur, I found it resonated. These aren’t precious, doted over, planned-out recordings. They are responses to a stimulus that could easily have been something else. But within the moment, they became what they were, and then responded and responded until they become something actually pretty wonderful.

HN: Tell me a little bit about how you use the Monome. What is your process?

DS: A monome is an open-source controller for Max MSP, a signal-processing software that can be used to manipulate any kind of video, audio, or midi input in real time. Over the last decade or so, a community of developers has formed around the monome, creating open-source patches that turns an 8×8 grid (or 8×16, or 16×16 grid) into a controller for a unique instrument of their design.

There are many patches, but I use one called the Party Van. It interprets each of the 64 buttons as controllers to different types of effects and loopers. In overly simplified terms, the Party Van emulates two Line 6 DL4s, but with the added ability to turn any step of an 8-step loop into a granular synth pad. It also has a raft of fx that can help color the signal in the way a pedal board might.

The “signal” in my case is one input from a microphone, and one input from a drum machine. My process is not exactly predictable, but often starts by capturing a grain of sound and responding to it with new sounds until it’s a churning, blissful orchestra of unidentifiable sounds, decisions, accidents and intents colliding.

HN: What do you perceive as “out music,” and what is the advantage to having the FITNESS series as part of our scene?

DS: The term “out” music comes from free jazz (I think). It’s music that doesn’t adhere to preconceived structures and leaves room for chance and improvisation. That kind of music is critical to a vibrant music scene. We live in an age where technology allows us to use texture as a musical parameter in a much richer way than ever before. It’s beyond melody and rhythm. It’s something that vibrates and changes and shifts, and that goes way beyond the palette of a rock band. I think having outlets like //FITNESS helps collect people who feel similarly, and exposes people to new possibilities.

Lincoln dream-pop trio blét has announced it will wade out into the Midwest for a brief stint before the holidays. Kansas City, Kan., post-rock band Pamona will join them for all eight dates. The jaunt starts in Lawrence, Kan., before dipping back into Nebraska for stops at new Omaha venue Milk Run and Lincoln’s Zoo Bar.

This summer, blét released its debut full-length album Borrowed From The Breeze, produced by Zoo Bar sound engineer Mark Wolberg. The record sustained the band’s lyrical sincerity and swirling instrumentalism while placing the listener at its side, rather than enveloping them. Hear our On The Record podcast review here.

See all tour dates below:

In Omaha, Roger Clyne and the Peacemakers play The Waiting Room with Nashville duo Birdcloud. The Tempe, Ariz., band has been active since 1998, embodying a Southwestern sound with influences ranging from honky tonk and Americana to pop and adult alternative. It released 11th studio album The Independent April 2014. Birdcloud, the duo of Jasmin Kaset and Makenzie Green, have built a low-key YouTube following through its irreverent performance style, making a mockery of country music culture and taking lyrical jabs at “the real America.” RSVP to the 9 p.m. show here.