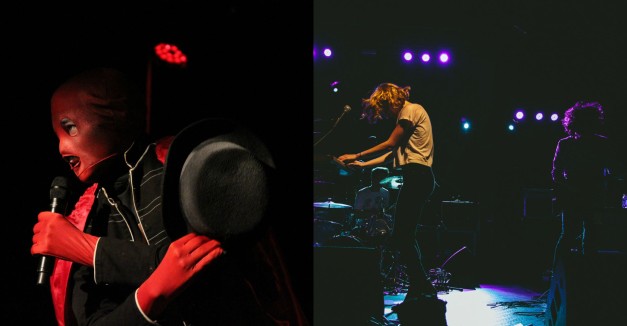 Icky Blossoms is poised to have its most fruitful year yet. With its sophomore album, Masks, out May 12 on Saddle Creek, the dark-pop Omaha band is headed out on tour after a Stereogum song premiere, a round of SXSW shows and this week’s announcement of a Record Store Day seven-inch.

And Icky Blossoms won’t be trying to draw crowds only on its own strength. Nine of those dates are opening for Of Montreal. The psychedelic-pop group is touring in support of its 13th studio album, Aureate Gloom, released earlier this month.

Check out the dates below and stay tuned for forthcoming Icky Blossoms tour dates.

Of Montreal plays The Waiting Room with Deerhoof on March 16. RSVP here.

Read Tim McMahan’s recent interview with Nebraska’s own Matthew Sweet here. After 20 year living in Los Angeles, Sweet and his wife moved back to Omaha in 2013. He talks about living in Nebraska again, his home studio and recording his first new album since 2011’s Modern Art.

Tickets to the event, hosted at The Holland Center’s intimate 1200 Club, are $45 for general admission or $100 for VIP. VIP includes a meet-and-greet with Sweet, reserved seating and a screen-printed poster signed by Sweet. There will also be a silent auction featuring prints of Hear Nebraska concert photography. Find tickets here.

Vega announced a June 10 show with CJ Ramone and Shonen Knife. RSVP here. CJ Ramone is best known as bassist for The Ramones from 1989 to 1996, replacing Dee Dee Ramone. He is currently touring his first solo album, Reconquista.

Tonight, Darren Keen is back to his home state after a winter move to New York City and the release of his Roland is My Co-Pilot EP. Tonight, he plays Vega with Laces, Blac and Paperboy. RSVP here.