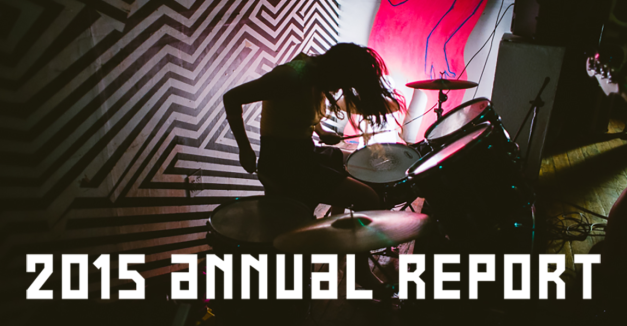 A little more than five years ago, Hear Nebraska started as a bunch of ink-scribbled ideas on dive-bar cocktail napkins. We are proud to say HN has come a long way since 2009.

Our 2015 annual report, released today, details a banner year for our relatively young organization. It features a summary of our accomplishments in journalism, programming and the  statewide partnerships that make it possible.

And we embarked on the inaugural Good Living Tour, combining our journalism and programming directives into one statewide venture. All told, we produced 18 music-related feature stories and nine all-ages concerts in nine Greater Nebraska towns.

Those are just some of the highlights. Check out the full 2015 annual report here. From musicians and industry workers to donors and contributors, thank you for making all of this possible. We look forward to big things in 2016.

It’s been a bittersweet week for one of Nebraska’s most active bands.

Lincoln rock band Freakabout announced yesterday that drummer Zach Zoellner will be leaving the band to attend the Musician’s Institute in Los Angeles. He will be replaced by Ian Francis, formerly of The Machete Archive and currently of Yesh.

While this year has been cause for celebration for a band quickly gaining steam, this is the second lineup change for Freakabout in five months. Former bassist Alex Drvol played his final show with the band at Maha Music Festival, replaced afterward by Ben Frerichs.

In the same announcement, Freakabout premiered the compilation video from its September national tour with American Pinup, set to “Fatal Attraction.” Watch the video below:

Tonight, the Knickerbockers farewell parade continues with No Tide, A Summer Better Than Yours, Down In Circles and The Fallen 77. No Tide frontman Will Conner wrote in to HN with his personal thoughts on the historic Lincoln venue:

“For me personally (Will Conner), Knickerbockers was always a place where I felt like I could really “do music”. I started a band, and Chris and Sean were wild enough to take a chance and give me my first show. The first show I ever attended was also at Knickerbockers and everything just clicked, it was everything I wanted to do.

On Wednesday, December 23rd my band No Tide will take the Knickerbockers stage for the last time alongside our long time friends in A Summer Better Than Yours, Down In Circles, and Fallen 77.

There are lots of clubs where there is no sense of community, bands don’t go to each other’s shows, and the venue won’t give you a chance if you can’t sell the place out.

What Chris and Sean did for Nebraska music was create a platform for locals musicians to be treated as equals, even to the countless touring bands who went on to be huge that came through that stage, if you had a band and were willing to work hard to put on show, Chris and Sean were into it. Putting on Rock shows for the sake of doing it.

Places like this that meant so much to so many are getting fewer and far between. I’m extremely grateful for the place that gave me and a ton of other kids with crazy dreams their start.”

Also tonight, Christopher Ford aka Christopher the Conquered plays night four of his personally curated Slowdown residency. He’ll perform sandwiched on a billing between hip-hop duo Both and singer/songwriter Jake Bellows. If that alone weren’t incentive, Ford posted in the Facebook event that there might be presents for attendees. RSVP to the 9 p.m. front room show here.

Also in Omaha, Twinsmith plays The Waiting Room with Head of Femur and Omaha rock band Fake Plants. Head of Femur reformed in October around original members Matt Focht, Ben Armstrong and Mike Elsener, playing its first show since the mid-aughts at Lincoln Calling. Read our feature interview on the band’s reunion here. RSVP to the 9 p.m. show here.