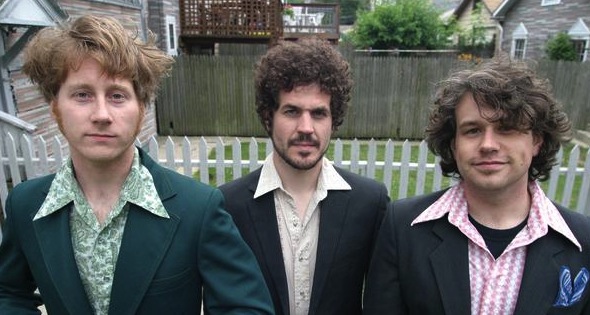 For Chicago-based, Nebraska-native Head Of Femur, deciding barely a year ago to reunite meant literally piecing together the band’s physical parts.

The orchestral pop outfit comprising vocalist Matt Focht, drummer/keyboard player Ben Armstrong and guitarist Mike Elsener had always pushed the envelope in terms of instrumentation. During a career that spiked in the mid-2000s, yielding LPs for spinART Records and a number of national tours, the trio of Nebraskans found inspiration in the big production of the late ‘60s and early ‘70s.

But only Armstrong and Elsener lived in Nebraska. All had families and careers, and only Focht played music with any consistency. With myriad string and horn arrangements and a far-flung braintrust, how does a band circle the wagons?

“I think it was something we all thought was going to be very difficult,” says Focht, the band’s remaining Chicago resident. “We didn’t know who was going to back us up.”

Rather, it was a matter of time before they caved. For the past couple of years over the holidays, the trio had what Armstrong initially labeled “practice.” That actually involved getting together over drinks and take-out and watching Head Of Femur YouTube videos. Armstrong says it wasn’t as much as football film study session as it was a chance to simply hang out.

Yet, breaking down those old tunes, even for nostalgia’s sake, gave way to new writing and recording sessions last August. Between a few new tunes and a handful of old, untouched songs from the cutting room floor, they had enough for a release. When Focht flew to Lincoln to record vocals, it became a Head Of Femur record.

“That added a little bit of seriousness to it, in terms of needing to get the sound good,” Focht says. “It stopped being just a basement project”

After more than a year of critical measure and plotting, the band comes back together tomorrow night at The Bourbon for Lincoln Calling (RSVP here). They’ll have a veritable super-group onstage with bassist Jim Reilly and drummer David Ozinga — both former Shipbuilding Company compatriots — as well as Cursive/Oquoa keyboard player Patrick Newberry and original violinist Randy Mollner.

In the band’s heydey, songs were crammed with hairpin turns and key and tonal changes, so much so that you might hear six genres in one track. Perspective has fussed with the dials of Head of Femur’s sound, according to its members. The new songs still carry busy orchestration, but toned down in favor of clarity while ensuring the same energy level.

The recording process has been an assembly job of it’s own. Drum work was done in basements, as well as with Zoo Bar sound engineer Mark Wolberg. Nate and Sam Morris at Circle M Studios recorded overdub tracks and are mixing most of the album. Some tracks were mixed with Chris Brickley at Chicago’s Wall-To-Wall Studios, where much of the band’s catalogue was originally recorded.

“In some ways, it’s more freeing because you don’t have to wait to get into the studio,” Elsener says. “You can test out all the orchestrated parts before having to commit to record them.”

For the weekend, which includes a show at O’Leaver’s Sunday night (RSVP here), the band hopes to enjoy playing for old fans, and maybe pick up some new ones. One thing hasn’t changed and likely won’t, even with an updated sound.

“We always did whatever we wanted,” Armstrong says. “We’re gonna do whatever sounds good to us and we gotta find people that are up to playing it and find audiences that are into it.”