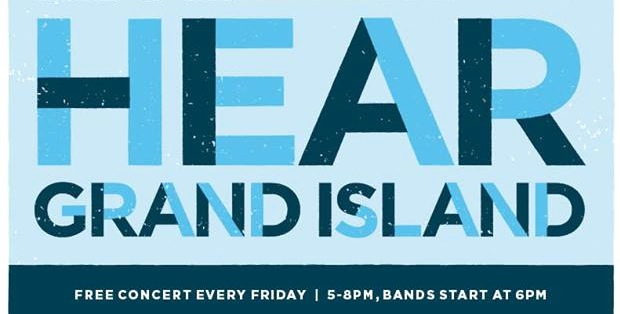 Lincoln’s Freakabout and Omaha’s Eric In Outerspace take on the second installment of the free 10-concert series in downtown Grand Island. Music starts at 7 p.m. while food vendors are available at 6 p.m.

With a solidified new lineup, Freakabout has already spent plenty of 2016 on the road, playing the Nebraska Exposed SXSW showcase and touring through the Midwest. Eric In Outerspace has played around Omaha with steady consistency, most recently opening for Chicago garage rock band Twin Peaks two nights ago.

See the full summer lineup and RSVP to the show here.

(A huge THANK YOU to our sponsors: Eagle Distributing of Nebraska, The Independent, Dinsdale, The Grand Theatre, Grand Island, Nebraska – Convention & Visitors Bureau, Necropolis Group and The Chocolate Bar.)

It’s the holiday weekend, but don’t let that stop you from seeing some great live music. Find some picks below, and a fuller listing at our statewide calendar here. If you do not see your show or one you plan to attend, leave it in the comments section or add it yourself using our contribute page here.

Let’s start with tonight. Refrigerator, originally formed by Simon Joyner collaborator Dennis Callaci, his brother Allen and drummer Joel Connell, plays O’Leaver’s, 1322 S Saddle Creek Rd. The band released the first Shrimper Records product in 1990, before the indie imprint put stuff out from the likes of The Mountain Goats, Lou Barlow and Dump (read a Q&A with Dennis from a couple of years ago here). Live shows for the band are rare; it hasn’t toured in nearly 20 years. This is its first in Nebraska. Joyner and the Ghosts and L Eugene Menthe open the show. Joyner has recorded two records with Dennis, and will produce the band’s new record during its stay. Entry is $7, RSVP here.

Tomorrow, Kansas City “interstellar psychadelic” rock band The Philistines returns to Omaha to play Reverb Lounge, 6121 Military Ave, with Lincoln’s Universe Contest and Omaha’s Heavy Lungs. The Philistines just released a new record, The Backbone of the Night, May 27 via The Record Machine. UC will likely also play new music, with a 7-inch (likely digital) on the way. Entry is $7, RSVP here.

Lookout Lounge, 320 S 72nd St, is celebrating the holiday in style Sunday with its first Punk Rock BBQ. The Queers headline an all-day affair that includes The Shidiots, The Rackatees, DSM-5, The Beat Seekers, Polka Police and Buggy Lewis & the Rabbit Grenades. Tickets are $8 in advance, $10 on the day-of. The event starts at 4 p.m. with food and drink specials RSVP here.

And on the Fourth, O’Leaver’s hosts a free ice cream social with live music from Philadelphia post-hardcore band Pinkwash, Hussies and Big Slur. There will also be an ice cream bar. Doors at 4 p.m. RSVP here.

Exercise caution when lighting anything on fire this weekend, and enjoy yourself.