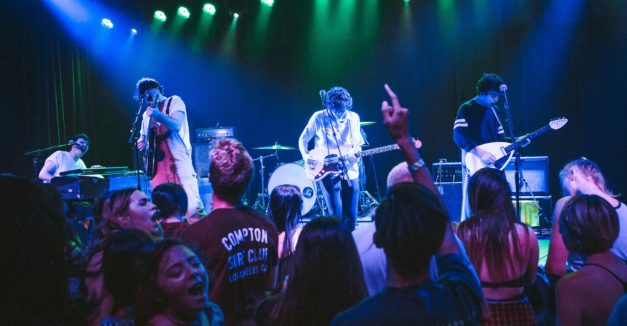 Add up the ages of every member of Twin Peaks and you get a total just a few years older than rock and roll legends like Keith Richards and Lou Reed. Just barely in their 20s, the band’s soul is closer in age to the likes of Richards and Reed than to its contemporaries.

Yet anyone looking for a Twin Peaks performance that speaks to a baby boomer’s sensibilities would be disappointed; this overdriven, heavy-noise garage punk outfit is creating and perfecting very much its own millennial identity. The Chicago band wrapped up their “Down in Heaven” tour last night at The Waiting Room, putting an energetic punctuation mark on their first summer tour for its young and rowdy Omaha audience.

The band played a set lasting just over an hour, both new and old songs mingling with covers of The Cars, John Cougar-Mellencamp and touring partner NE-HI on their track list. The band, along with openers Eric in Outerspace and NE-HI, put together a night rich with noisey, electrifying, bluesy devil-may-care rock and roll that seemed to feed directly into the energy of the mostly-late teens crowds. 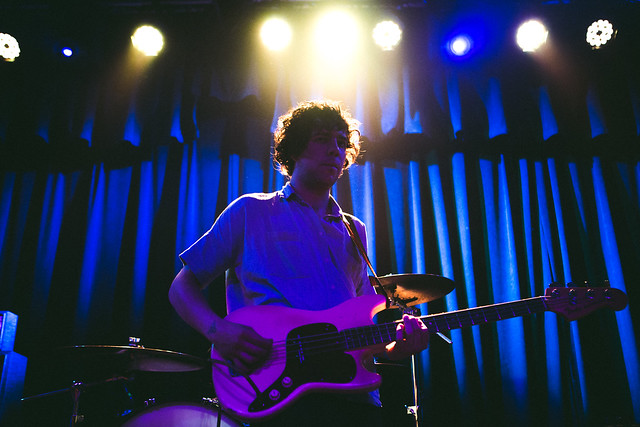 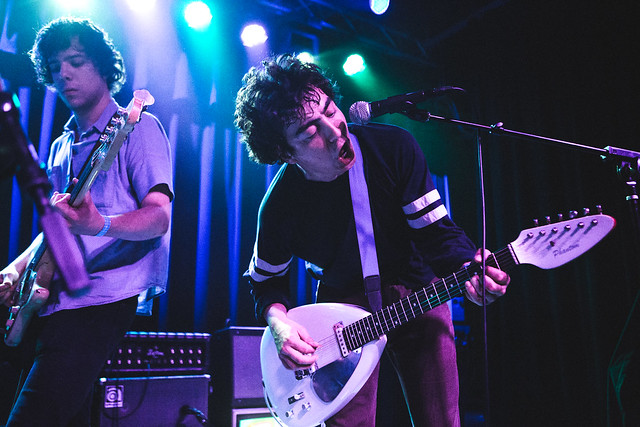 Local heavy pop band Eric in Outerspace started the night, taking the stage just after 9:00 pm. A solitary soul stood in the middle of the pit as frontman Sean Paul played his first notes. Within a matter of literal seconds, a crowd seemingly appeared out of nowhere. By the first 30 seconds of the opening song “Bottle Rocket,” it seemed as if more than half of the bar had been drawn to their feet and to the edge of the stage.

The four-piece Omaha band played a seven-song set that lasted just over 20 minutes. The set, which consisted mostly of familiar songs from the band’s rep like “Gee See” and “Paper Cut Pt. 1,” was a case study in the type of heavy pop/post-punk/emo to which it is exceedingly easy to bob your head to and think about your life. This was perhaps best exemplified in the fourth song of the set, a moaning, slamming tune called “This Summer Really Blows.” The distorted, grunge edge of the ringing guitars fit right into the emotive growl that defined Paul’s soaring and clear voice as he sung “It’s May and I’m wishing for snow…/ Come on, I’m waiting to go/ It’s too damn hot/ this summer really blows.”

Eric in Outerspace proved once again they are writing the music many will reach for next time their friends are over to their dorm room to drink PBR and complain about their horrible bosses, failing relationships and bad economics professors. 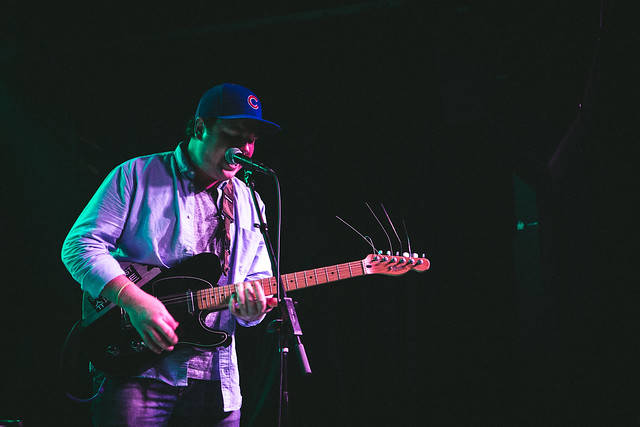 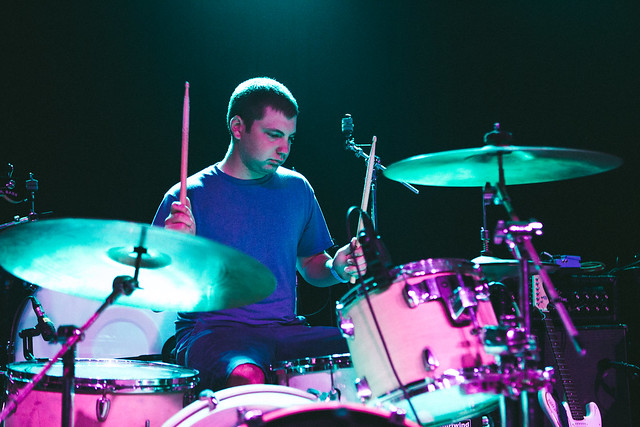 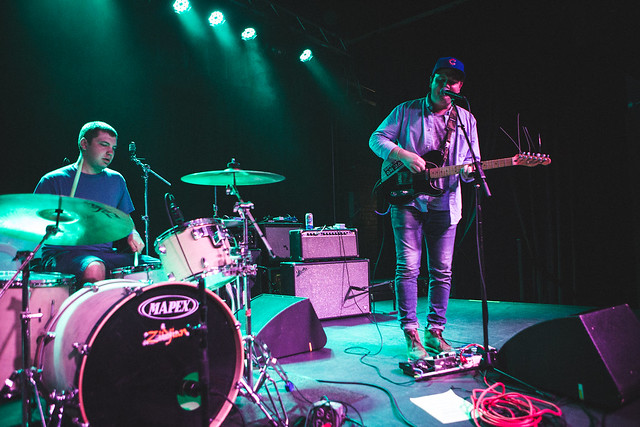 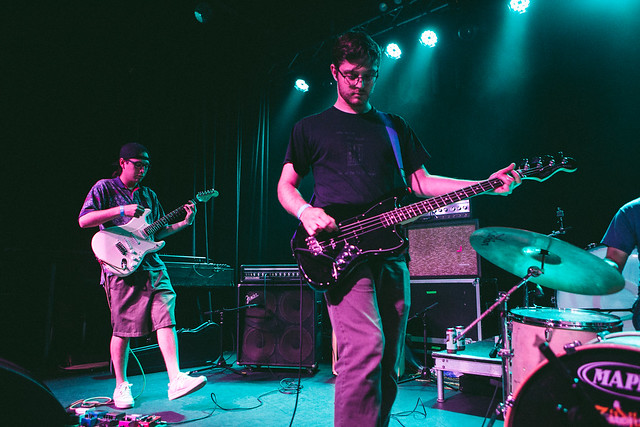 Chicago band NE-HI was next to take the stage. The four-piece band was as charismatic as they were busy under the lights across their 40 minute set. Every member jumped, bobbed, danced; even as their setlist slowed down, the musicians maintained an absolute commitment to conveying the energy in their music with their bodies.

A self-defined indie pop/rock ensemble, NE-HI crossed an interesting genre line in their sound during the show. The shimmering, reverbed sound coming from the two semi-hollowbody guitars on stage, the driving beats from high hat and bass drum on the set and the imaginative and crisp writing was reminiscent of the New Wave college rock of the 1980s. But the distorted edge of the guitar sound, the heavy tom beats, the heedless vocal harmonies and the surf-sounding guitar licks gave a distinct impression of modern garage rock. The set NE-HI played in Benson was noisy, energetic and had a hard edge; as if The Cure had a weekend affair with a distortion pedal and a couple members of FIDLAR. 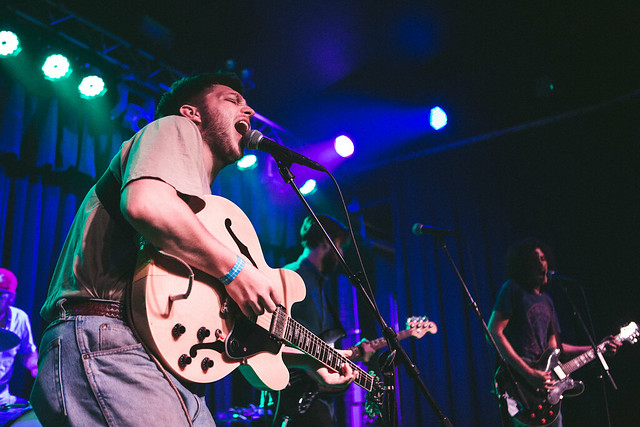 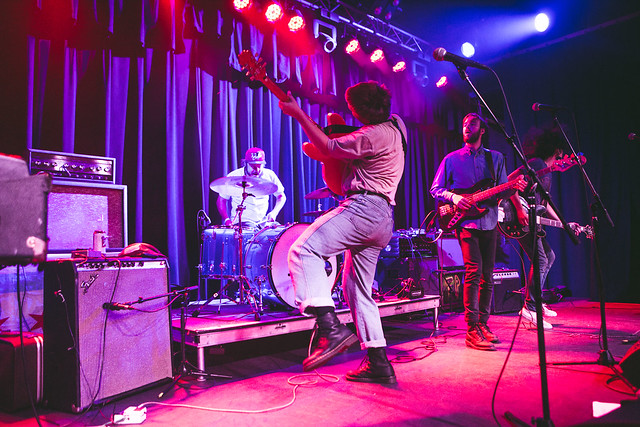 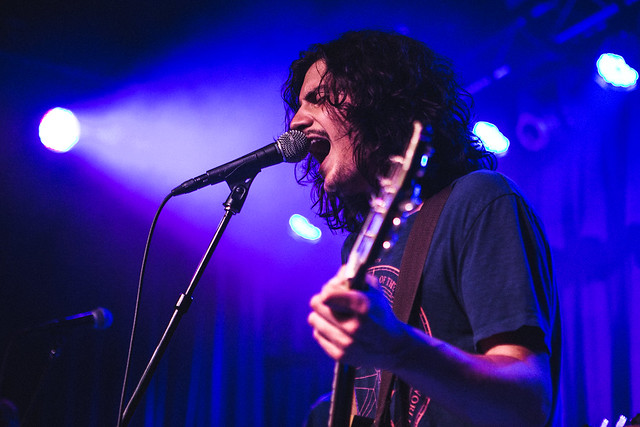 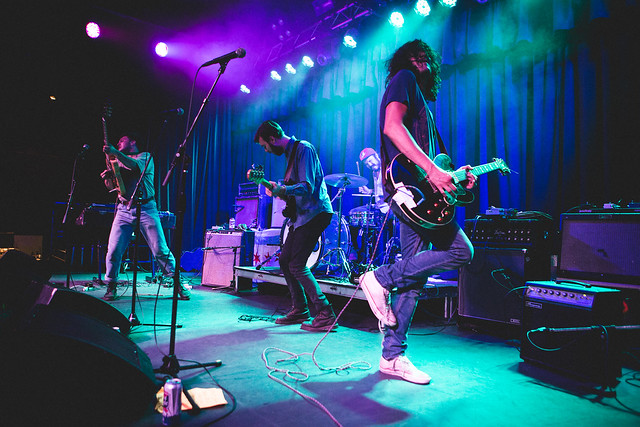 This imaginative mashup, coupled with the raw energy radiating from the members themselves, seemed to resonate with the young crowd in such a way that for a second time seemed to affirm the rowdy yet melodic sonic identity that many young people have embraced.

Twin Peaks took the stage at 10:30 p.m. with Old Style beers in hand to play an hour long set.

“Hell yeah! We have a lot of love for Omaha. We are going to play a bunch for you guys” guitarist and vocalist Cadien Lake James told the crowd. Cheers from the kids in the audience; one jumps up on stage and then quickly dives back into the crowd. 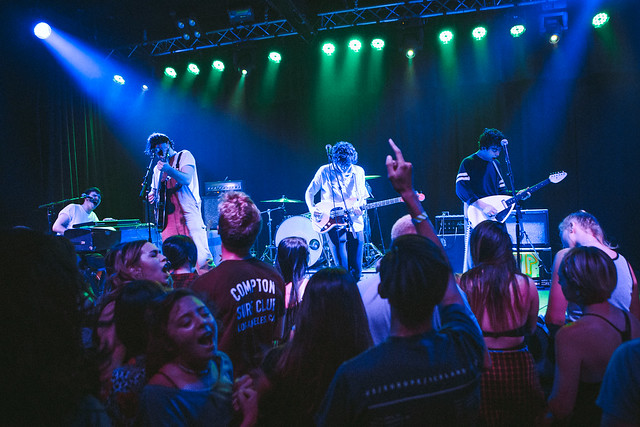 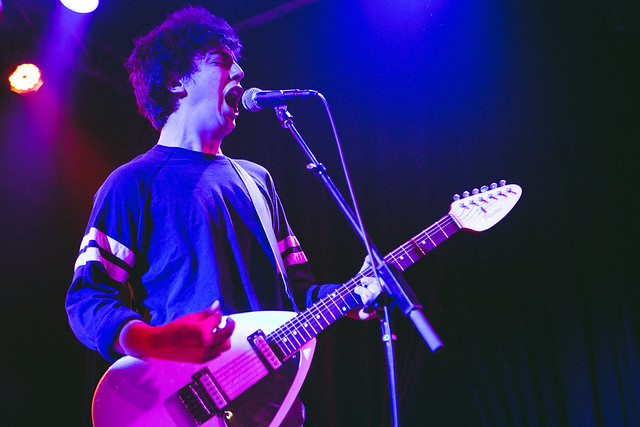 Like the brews they were drinking, Twin Peaks brought a combination of old Chicago and new. Twin Peaks is very much a garage punk and grunge band. Cadien Lake James and Clay Frankel’s guitar crunch and wailing vocals gave off a novel and exciting edge that is as engaging musically as it is energizing (there was a mosh for most of the show, as an example.) Furthermore, the devil-may-care attitude of the band and almost blase approach to their own style gave off an impression that rang almost of a punk show.

But at the heart of Twin Peaks’ music is a fundamentally old-school idea, and the influence of the 1960s isn’t hard to spot in their music. The songs shuffle with an aire of The Drifters or Buddy Holly while they thrash. The bluesy chord progressions and guitar work, coupled with rhythmic and busy basslines, reminds of some of the best the 1960s has to offer, yet the wild and foolhardy vitality and grunge of the band and howl of the vocals seems entirely new. 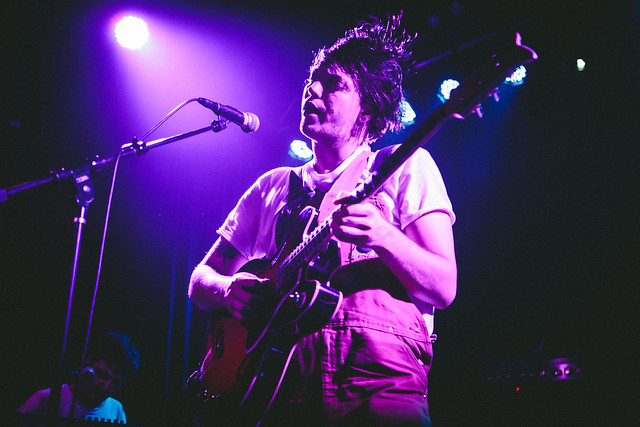 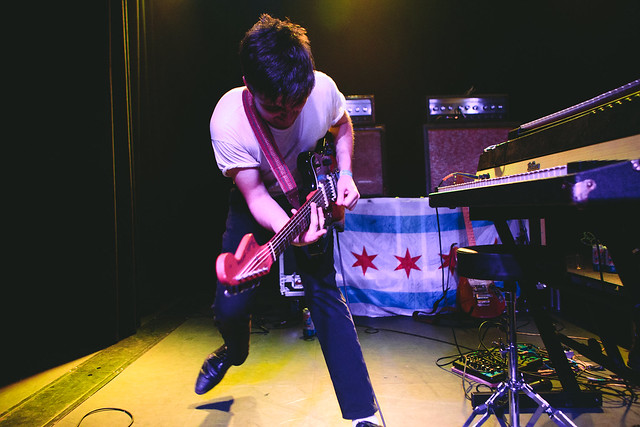 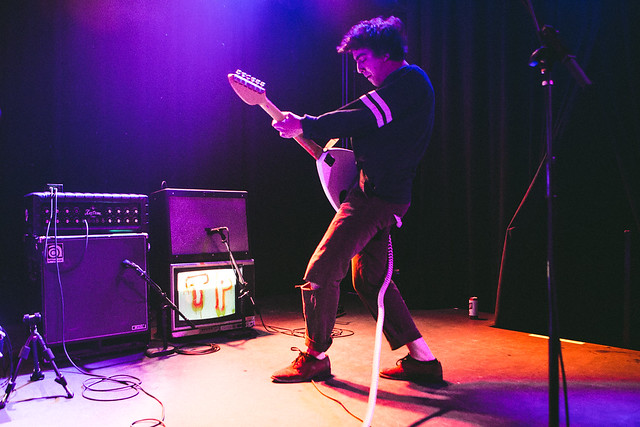 This was perhaps best demonstrated by one of the final songs of Twin Peaks’ set — one of their biggest hits “Making Breakfast.” The performance was the distilled essence of not only Twin Peaks performance, but the night as a whole. Irreverent, buoyant, and vigorous vocals from Frankel accompanied the loud overdrive from the ensembles three guitars. The drums and bass pounded out a driving beat for the intricate, bluesy guitar licks and the howl of Frankels’ voice. The aforementioned young, stage-diving crowd really went in for it — moshes turned into dances turned back into moshes turned into one amoeboid party.

Twin Peaks’ “Making Breakfast” performance was the ultimate salute to the “f*** it” attitude and interpretation of old school rock and roll that defined the night.