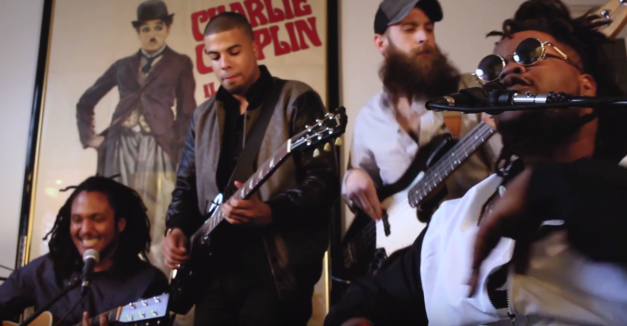 As the end of NPR Music’s Tiny Desk concert contest draws nearer, four Nebraska artists have given their best from behind their own desks.

Kait Berreckman, Domestic Blend, Salt Creek and Tragic Martha have all entered the contest, held annually by NPR Music in part to discover unknown talent around the country. It runs through Sunday, Jan 29 (find out more here.)

Berreckman’s entry, the upbeat, timely “Oh, Cecile!” comes from the Omaha singer/songwriter’s most recent album Battle Scenes. The song was written for Planned Parenthood president Cecile Richards following her Sept 2015 testimony in support of the health care organization. Marta Fiedler and Jess Errett sing back up. Of the song, Berreckman says she will donate all proceeds from its sale and its 7-inch record to Planned Parenthood; view her bandcamp page here.

Domestic Blend combines funk, rock and hip-hop for its video “Intoxicated,” which dropped yesterday. Brady Wells’ smooth vocals complement a tight rhythm section (drummer Brandon Myers and bassist Matt Jones) and Sebastian Lane’s chirping lead guitar. NZ finishes off the song with an extended verse. Domestic Blend plans to release a new album in June and follow it up with touring in August.

Salt Creek’s performance comes from The Common LNK, flanked by the community space’s bookcases and couches. On “Taste The Floor,” Vocalist Chase Thompson is brooding as the song gently rises and explodes around him. Watch it below:

Not least of all, Hyannis, Neb, based act Tragic Martha submitted one of the earlier entries out of the Cornhusker State. Founder and lead vocalist Kim Nuss and bassist Sarah Bailey (also of Briner) trot through “Restless,” a classic-style singer/songwriter pop tune from the solo Little Black Kitty Cat EP Nuss released in Nov 2016. Watch below:

Omaha native jazz musician Terrace Martin has garnered a piece of the spotlight in the wake of his Grammy-nominated album Velvet Portraits, most of which was recorded at Omaha’s Make Believe Studios.

Martin shared the video for “Oakland,” a track from that album, this week in an interview with Billboard. The song is an ode to the city and its vast culture. Martin talks about the idea behind the clip, his Grammy nomination and recording with his father, jazz drummer Curly Martin, in that interview, which can be found here.

Watch the video for “Oakland” below:

Tonight, it’s country club night at Zoo Bar with Clarence Tilton. The Omaha country/rock act has a five-song EP in the can for this coming April and is working on a full-length album for early 2018. The show starts early at 6 p.m., RSVP here.

Find a fuller listing of events at our statewide calendar here.