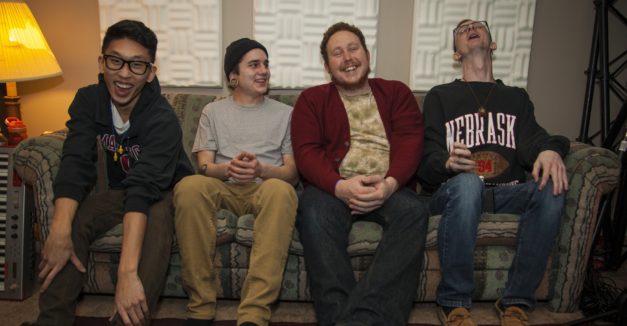 In its seventh year, in addition to curating submissions from Nebraska, Iowa and South Dakota residents, Film Streams has introduced the Student Spotlight. The yet-to-be-announced jury will reserve space for an entry by area primary or secondary school students, encouraged to submit projects individually or as a class.

More details, including independent jury members, will be announced later this summer. Filmmakers who are selected for the showcase will be invited to the opening night screening, plus will share a percentage of box office sales for the week-long run. For a second-straight year, the Local Filmmaker Showcase will tour the aforementioned three eligible states.

Back in October, Lincoln band I Forgot To Love My Father punctuated its transformation from the brooding acoustic solo act of JP Davis (former HN intern) to full-on seven-piece rock outfit live and right before my eyes on Hear Nebraska FM.

Only 100 copies of Live on HNFM exist, and are now available via We’re Trying Records’ store here. Catch the band Friday, May 13 as it opens The Ambulanters’ album release show (RSVP here).

While the soundscapes in Fontenelle’s work are front and center, it’s the active, steady rhythm section that drives the band forward.

Listen to “Good Times” below:

Tonight, historically influential Slick Rick graces The Waiting Room stage. Rick The Ruler’s landmark 1988 LP The Great Adventures of Slick Rick launched one of the most successful hip-hop careers of all time. He is widely considered both the most successful British-American rapper in history and the most widely sampled, with his work appearing in that by artists like Beyonce, The Beastie Boys, TLC, Nas and many more. Egyptian singer-songwriter Hakim opens the show. RSVP here.