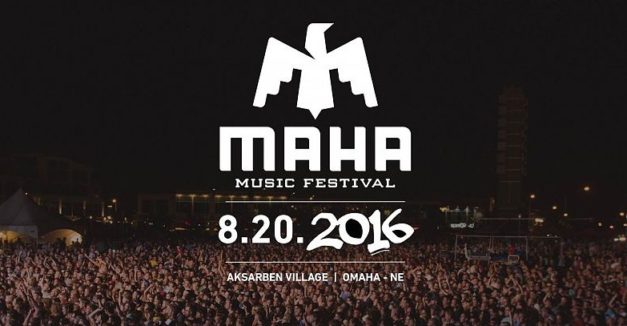 [Editor’s note: Hear Nebraska is a media sponsor of the 2016 Maha Music Festival, as well as a participant in the community village.]

The eighth annual Maha Music Festival is upon us, bringing 12 local and national acts to Omaha’s Stinson Park this Saturday, Aug 20, and looking to repeat last year’s sell-out attendance.

If Maha was poised to continue it’s growth last year, the nonprofit festival has broadcast it center stage in 2016. In December, it hired then-board of directors vice president Lauren Schomberg as executive director, the organization’s first full-time position. She said in April that focusing on Maha full-time will bring increased institutional knowledge, allow her to explore growth opportunities and enhance the organization’s ability to become a better community partner beyond the day-of-show. That also means fostering partnerships that allow Maha to continue booking big lineups.

“It also allows us to focus more time on sponsorships, which is directly correlated to whether or not we’re able to book the bands you want to see and execute an experience you don’t want to miss,” Schomburg told HN via email.

Maha renews its commitment to community as well, centering its focus on mental health awareness and treatment in addition to showcasing the missions of its 20 Community Village participants. Selling out an entire park, Maha seems to realize, means it can use its standing to spread that message as far as possible.

So, for Nebraska residents, Maha remains a festival to be proud of even before the gates have opened. Once they do, however, attendees are in for a packed day of entertainment which, in addition to 12 live music acts, also includes the OK Party Comedy Tent and Louder Than A Bomb Slam Poetry troupe.

Tickets are still available, going for $55 for General Admission and $185 for VIP passes. The GA price jumps to $65 on the day-of. For a complete list of FYI details — including where to park, what to bring, where to charge your phone/rehydrate and what local vendors to patronize — see Maha’s website here.

Below, see a breakdown of the festival schedule and get to know the acts before this Saturday.

The Band: Josh Hoyer & Soul Colossal have been one of Lincoln’s premiere soul acts since it burst onto the scene in 2012. Three studio albums, a direct-to-disc live cut and thousands of miles of touring later, and it is one of the most polished, energetic acts around. The oft-made comparison of its frontman to a fire-and-brimstone preacher are apt, but Hoyer isn’t trying to frighten you into believing, just imploring you to love. There’s pure joy in Benjamin Kushner’s guitar soloing and Memphis Shepard’s flashy, precise drumming.

What’s new: Hoyer and company have hit the road hard this year (like most years) in support of Running From Love (Silver Street Records), which dropped April 8 this year.

The Band: CJ Mill’s rise within the Omaha scene has been nothing less than swift and strong. It started with last summer’s snappy, soulful breakout EP Quiet. She has since formed a talented band around her to beef up and electrify her sound. 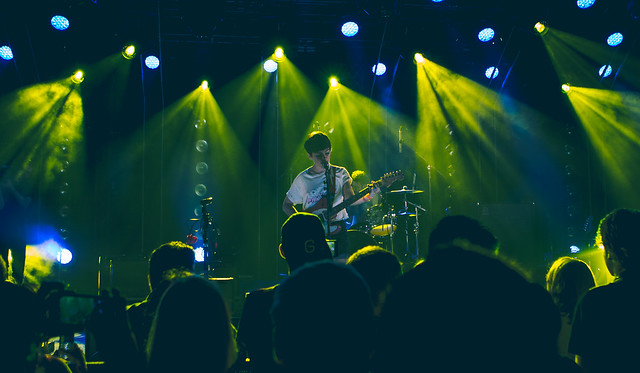 The Band: Hailing from New Paltz, N.Y., the slop pop duo of guitarist/vocalist Alex Luciano and drummer Noah Bowman met when Luciano interrupted another of Bowman’s bands at a show for a lighter. Stereogum was ahead of the game when it named Diet Cig “Band To Watch” in January 2015. Since then, the band has released a pair of well-received EPs (one on Father/Daughter Records) and followed through with a strong early 2016 touring slate.

What’s new: Diet Cig unveiled new material at this year’s SXSW, and with its recent signing, a trip to the studio may be on the way.

What’s new: See Through Dresses is touring hard again this year while working on its sophomore full-length at ARC Studios. Expect it next year.

The Band: A veteran of acclaimed rock bands Uncle Tupelo and Son Volt, Farrar launched his solo career in 2001. His catalogue ranges from sparse folk to grand rock arrangements, often mixing in experimentation with psychedelia and Eastern influences. Farrar has collaborated with members of The Flaming Lips, Blood Oranges and Death Cab For Cutie.

What’s new: 2015 marked the 20 year anniversary of Son Volt’s beloved debut album Trace, which despite cool commercial reception was critically lauded. Farrar will play the album in its entirety at Maha. 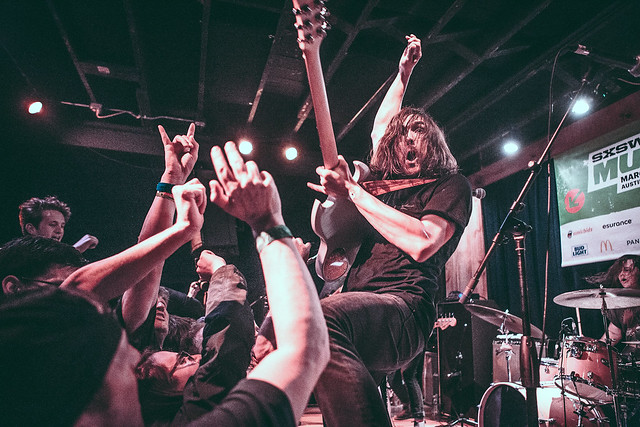 The Band: The foully-named Nashville six-piece introduced its raging, riffing four-guitar attack to the world this past June, when it made its late-night television debut on Late Night With Seth Meyers. It was promoting its third full-length album Turn To Gold (Infinity Cat), ripping and screaming through “Ain’t a Sin to Win.” But the boys have been at it since 2009, making their label debut two years later and slashing their way to the national circuit one heavy-metal inspired romp at a time.

What’s new: Turn To Gold dropped June 10, but not before the band decimated Austin, Texas, bar Cheer Up Charlie’s during its SXSW set, climbing the 30-foot scaffolding to rain solos down upon its audience.

The Band: Forming out of the ashes of vocalist/guitarist Ritzy Bryan and bassist Rhydian Dafydd’s old band Sidecar Kisses in 2007, this Welsh alt-rock trio quickly went to work. Its debut EP A Balloon Called Moaning attracted enough attention for Atlantic subsidiary Canvasback Records to come calling. The band made its debut LP The Big Roar in Los Angeles in 2010, with Muse/Foo Fighters producer Rich Costey sharpening its focus. It has since produced three total studio albums and carved its way into regular rotation on alternative rock radio.

What’s new: The Joy Formidable has since parted ways with Atlantic, releasing third album Hitch on March 25 on Caroline Records. It’s video for “The Last Thing On My Mind” features barely-clothed or naked men in response to the objectification of women.

The Band: With more than 13 albums worth of wry, lo-fi bedroom rock to the Car Seat Headrest name, Will Toledo is nothing short of prolific. His example is a modern one of finding music industry success not through the classic touring method, but through the internet. Matador Records found him through his Bandcamp page in 2015, releasing his 12th album Teens of Style last fall and leading the way to Toledo’s first U.S. tour. His emergence has also sparked features in The New Yorker and NPR. Of Toledo’s lyricism, Pitchfork’s Jeremy Gordon writes: “…he’s a cousin of artists like Joanna Newsome, Bright Eyes, or Okkervil River, who never let their prodigious literary intelligence get in the way of crafting something you might actually enjoy listening to.”

What’s new: Teens of Denial comprised his first all-new material for Matador Records, peaking at No. 3 on the Billboard US “Heatseekers” chart and grabbing positive reviews across the board. 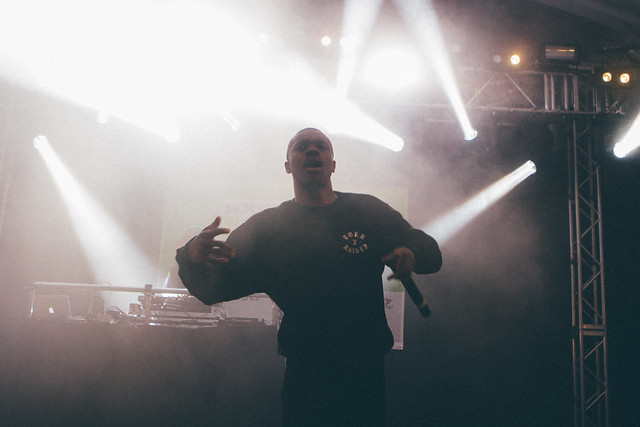 The man: Born in Long Beach, Calif., and brought up in the Odd Future company of Mike G and Earl Sweatshirt, 22-year-old Vince Staples has been nothing short of a revelation over the past year. A series of early mixtapes (including a collaboration with Mac Miller) led to May 2015 full-length debut Summertime ‘06, on which Staples’ social and political consciousness beamed, cutting straight to the core of systemic issues plaguing his hometown. The 2015 XXL Magazine Freshman Class member has carried the momentum into this year where he whipped the Stubbs BBQ crowd into a frenzy as an NPR Showcase headliner at SXSW and scored a cover story in Fader.

What’s new: Staples will drop his first project of the year, the Prima Donna EP, on August 26. Guests include A$AP Rocky, No I.D. and James Blake. 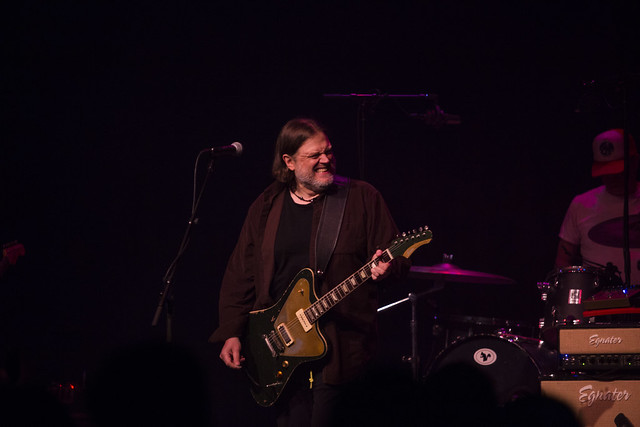 The Band: A Lincoln, Nebraska native, Sweet came up in the Athens, Ga., music scene in the mid-’80s, his first two albums well-received but commercially absent. Then came 1991’s Girlfriend, which scored big with the title track and sparked perhaps his best-known three-album run that included Altered Beast (1993) and 100% Fun (1995). Stereogum calls it “…a loose trilogy of guitar-driven, big-hearted, coming-of-age power pop.” The heyday long since faded, Sweet still enjoys a cult national and local following and still regularly releases new music. 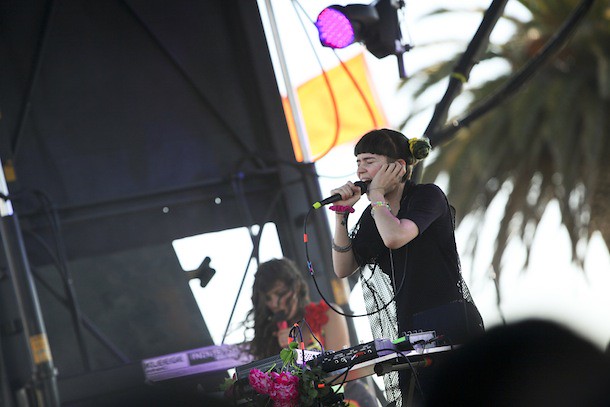 The woman: Six years into Claire Boucher’s electronic pop project Grimes, and the adjectives for her eccentric alter-ego fly. “Pop For Misfits,” a Sept 2015 New Yorker profile headline read. “The Triumph of a Self-Made Oddball,” Rolling Stone trumpeted two months later. It all seems in response to an artist re-centering herself after exploding to fame. The Canadian artist did just that, blossoming from underground performer to stardom following 2012 release Visions — all the more impressive that it was recorded using Garageband. It led to signing with Jay-Z’s management company Roc Nation in 2013.

Grimes is noted for her atypical combination of vocal elements and eclectic array of influences, from electronica to R&B to the medieval. She’s also known demanding control for her own image. For her most recent LP Art Angels, which was again self-recorded, Boucher learned how to play guitar and violin and how to use Ableton Live. Her videos, some of which she’s self-directed, have received tens of millions of YouTube views; she does her own album art.

In short, Boucher is a unique, solo force to be reckoned with. Friday, she kicks off what promises to be a one-two dance party punch.

What’s new: Grimes toured Asia and Europe with HANA this past spring, and released the third and fourth videos (“Kill V. Maim” and “California”) as part of her Art Angels video series.

The band: It would be difficult — odd, even — for Passion Pit to shake the foundational sound that instantly springs to mind upon utterance of its name. There’s the joyous fountain of “Little Secrets” from 2009’s Manners and the skittering, bursting “Sleepyhead” which originated on its debut EP Chunk Of Change.

But more recently, founder Michael Angelakos has re-seized control of his own narrative. The story of that first EP — that it was made for his then-girlfriend — was deployed early and often  by journalists and publicists. In November of last year, on Bret Easton Ellis’ podcast, he overturned it, coming out as gay publicly for the first time at age 28. Since then, he says he’s been making the most fully-honest music since the band’s early days.

Three records in, and Passion Pit remains imaginative, bright and highly danceable. Kindred dropped in April last year on Columbia Records, which launched a fresh round of touring and three more singles, including the pounding, elevating “Lifted Up (1985).”

What’s new: There’s whispers of a new album in the works, fueled by a pair Angelakos tweets from early this year.