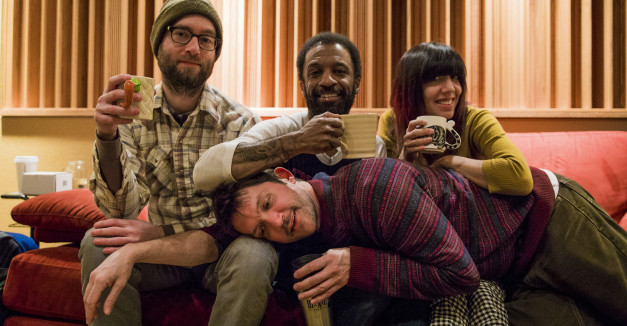 On a chilly January afternoon, one of Nebraska’s favorite (and, perhaps, once considered bygone) projects was alive and recording in the friendly confines of Mike Mogis’ ARC Studios.

Two weeks before, The Good Life — Tim Kasher, Ryan Fox, Stefanie Drootin-Senseney and Roger Lewis — had packed The Waiting Room in the midst of a short Midwestern tour. They announced at that show what many had suspected after the band reunited in mid-2014 for a short West Coast tour: There would be a new Good Life album in 2015. Slated for summer, it will be the band’s first since 2007’s Help Wanted Nights.

The Good Life was four days into tracking its forthcoming record when we visited them in the studio on Saturday, Jan. 10. Ben Brodin was at the engineering helm, and he’s been very busy in ARC Studios’ B Room the last few years working with Simon Joyner, Jake Bellows, Orenda Fink, Josh Hoyer and more. The band has since begun mixing the record.

In the following interview, we discuss whether the album will have a concept, its general vibe and what reconvening is like after a half-decade musically apart.

[Quick note: These questions were written remotely by HN’s managing editor Chance Solem-Pfeifer and put to the band by JP Davis. The “I” who attended The Good Life’s Dec. 27 show at The Waiting Room was Chance.] 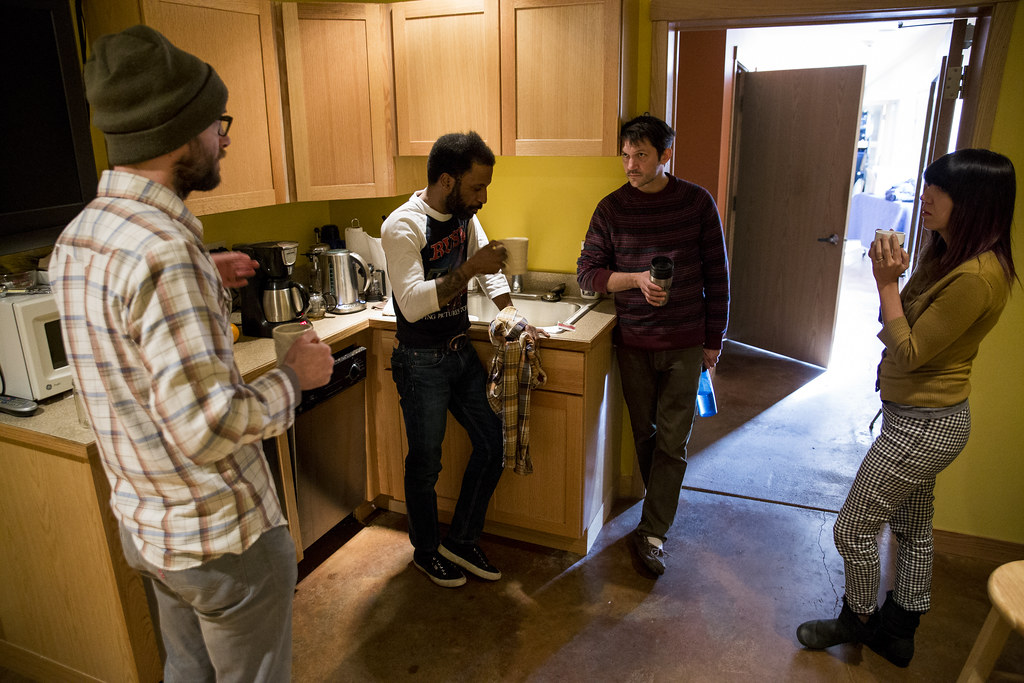 Hear Nebraska: It’d been more than a half-decade since we’d heard from The Good Life as a band, though obviously we’d seen you guys doing plenty of other things individually. What happened before that California mini-tour earlier this year that brought you guys back together?

Tim Kasher: Well, we got in touch with each other a year ago, last January, to see if our schedules would line up to do this. So, it was something very un-rock ‘n’ roll, I suppose … I think I had already started writing some of the songs. I think I wanted to write enough songs that I felt confident enough to bring it up, and mention it.

HN: Seven years since the last album, what was most different when you reconvened? Musically, personally, as a unit, whatever.

Stefanie Drootin-Senseney: Yeah, babies. There are babies around. We feel like we’ve all continued to play music while we were apart, so we felt like maybe we’re tighter musicians than last time. 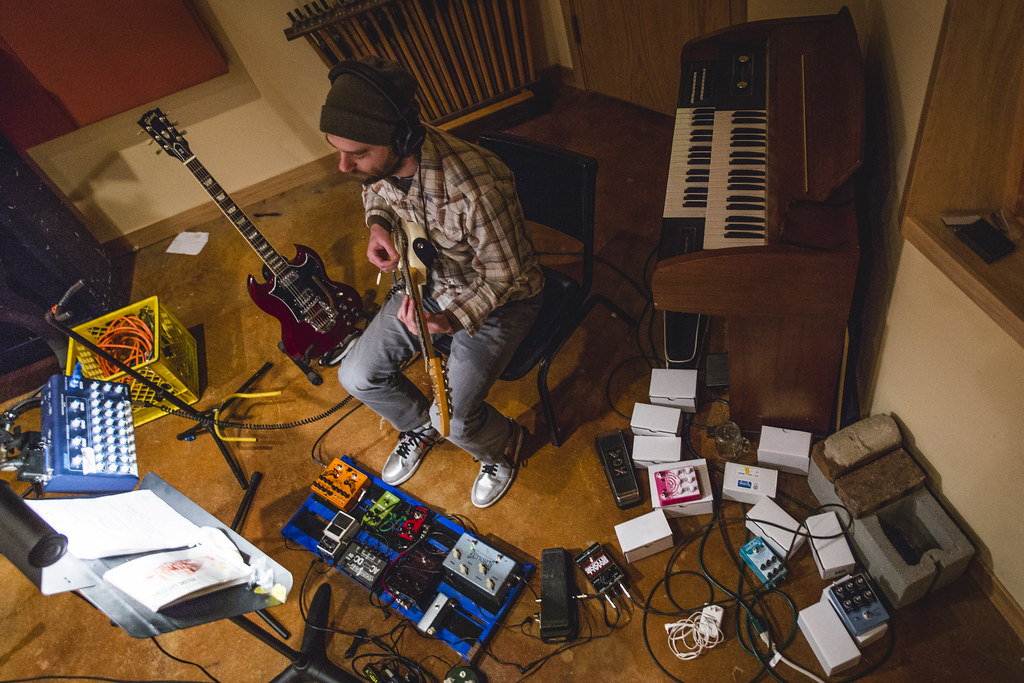 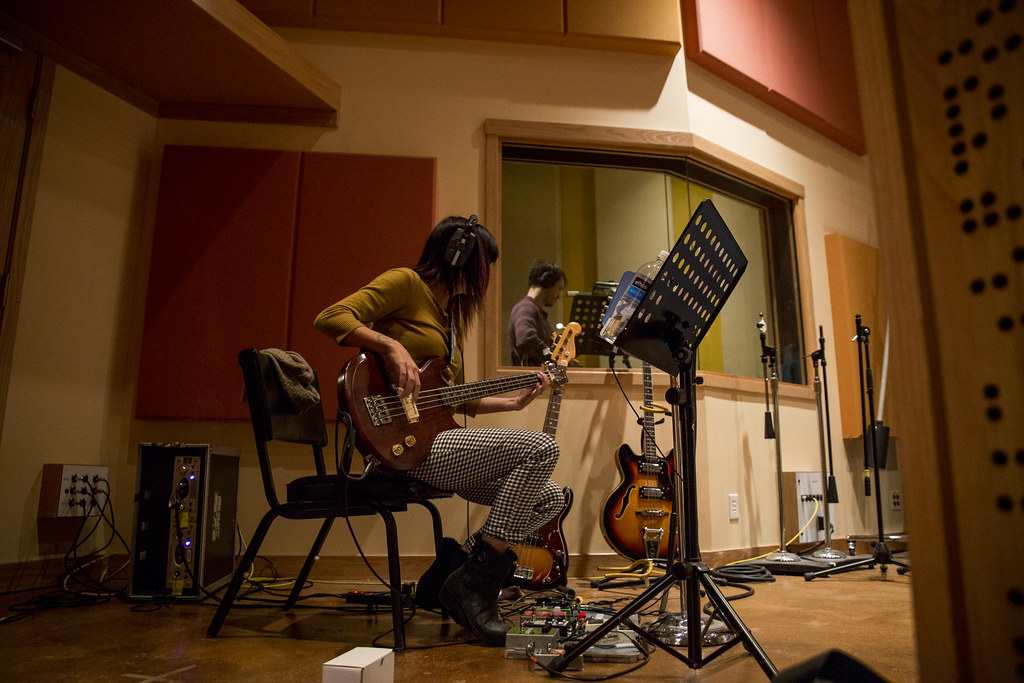 Roger Lewis: All the new and old music that has been discovered in those last seven years has shaped my brain at least. A lot of influences have come into my eyes in the last seven years … a lot of soul music.

Tim:  Yeah, it’s deliberate … It’s not very often, I think it’s maybe never anymore, that I pick up a guitar and write just for the heck of it.  I think I always have an album in mind that I’m going to write for.

HN: I was trying to pay extra attention at the Dec. 27 Waiting Room show when you said you were playing new stuff. It seemed like one of the musical qualities that was still holding strong was the propensity for double guitar lines with Tim and Ryan, and Stef playing high in the melody with the bass. How did the new songs come together and did you feel yourselves falling back into the groove of your musical sensibilities as a group?

Tim: One thing that we’ve kind of remarked upon in this last half-year is that it is really easy to play with each other. Even though we’ve spent a lot of time apart, I think we all know how each other plays … It’s pretty comfortable to dive back into that … This is not going to be one of those bands that suggests this is going to be some radically different album, because it really may not be to a lot of people’s ears. But we personally recognize the difference in this album … and the style of this record relative to the last two records anyway, where we’ve kind of gone a bit more “folk.” We didn’t really have to dig much for that.

I think the seven years that we spent apart musically … there wasn’t one of us that was like “I just really need to put Bouzouki all over this record,” … Isn’t that an instrument? We’re all still friends.  We’ve all been in touch.  It’s not like anybody went to Tibet. So even though it’s a bit different there’s no, like, wild surprise. Like, Roger liking soul music a lot. It’s not like it’s going to change the dynamic of the drums or something.

Stefanie: Still, playing with the other bands that I did, there’s definitely a Good Life feel with these songs still.  In the way that [Tim and Ryan] are doing the dueling guitars, and I’m playing the melodic bass line, and Rog is doing the Rog thing… 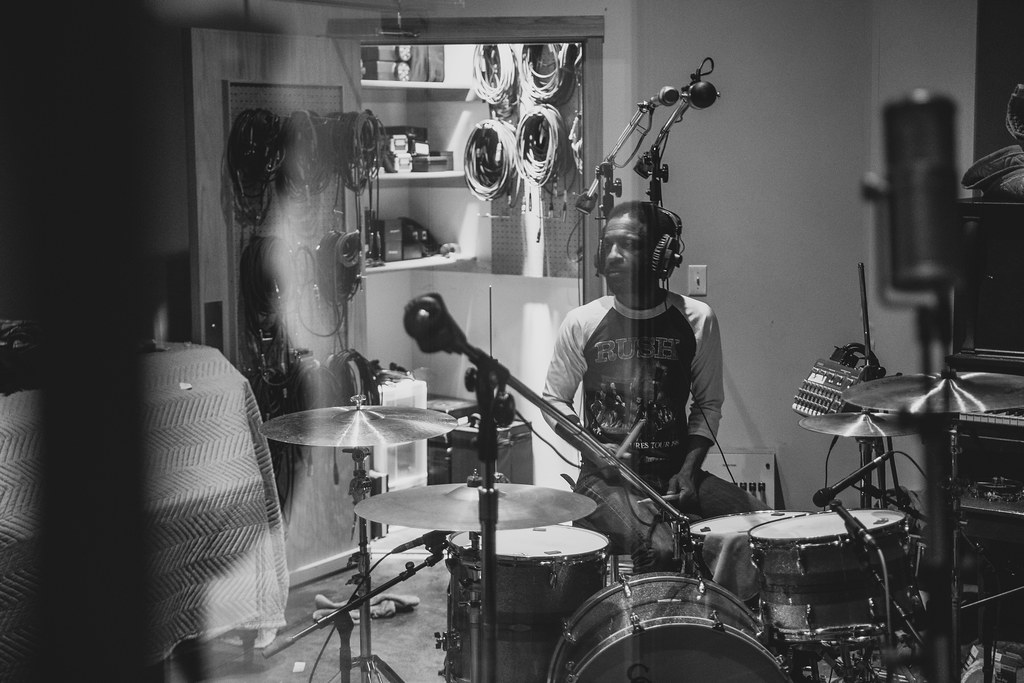 Tim: I think everyone has very specific sounds.  Like, if we put a Chicago math rock drummer behind our band, think about how different that would sound.  Or a bass player that wants to sit in the backbeat would be a totally different vibe.

HN: On stage that night, it also seemed like everyone was focusing pretty hard. Not unduly, of course! Just pretty palpable looks of concentration. When does the new material start to feel totally natural? Any writing or tinkering still going on in the studio this week? If so, what does that look like?

Stefanie: Definitely tinkering going on.  Lots of tinkering … We went on a little tour in December, and then we did a little one in August.  There are a couple of the songs we played both times, and for sure, those feel natural now … but those got tinkered as well; they are getting tinkered.

Tim: You are working on stuff live in a practice space and on stage, but when you’re in the studio you are actually putting on headphones and getting a closer look and listen to what everyone is actually doing. You maybe were mostly familiar with it prior to that, but that’s mostly were some tinkering will happen. 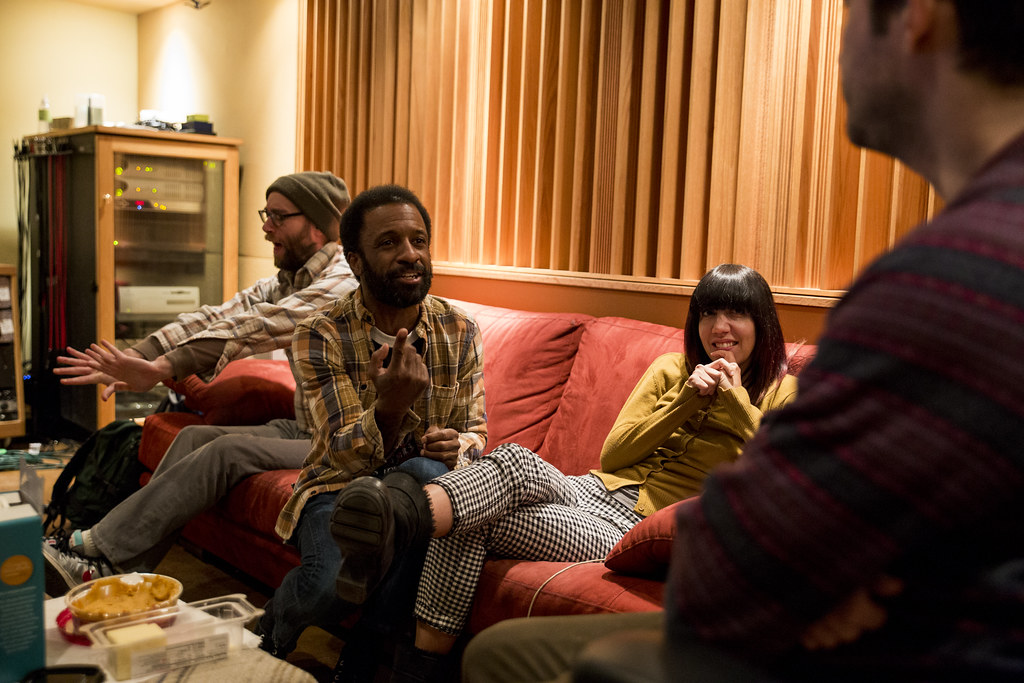 HN: I also remember one new song from the Waiting Room set that was very upbeat, almost with some melodic punk feelings to it. With the new stuff, can we expect more of The Good Life’s habit of pairing very intimate spare songs with some blasts of emotion?

Tim: I think that we’re probably leaning heavier … on the rock n’ roll blasting side, and a little less on the really subdued quieter, and smaller sadder stuff, although it’s there.

Stefanie: We haven’t 100 percent solidified what the record is yet; so it could end up that way … we don’t know.

Tim: I think there’s certainly a more vibey, druggy vibe on this record than previous.  Like a new facet.

HN: How conceptual is the new record? Last time we heard from the band was Help Wanted Nights, and with its screenplay roots and setting, that one definitely had a conceptual hook.

Tim: I think that it’s fairly light. There are elements that tie songs together, which I do with every record.  I think it will probably land on the loosely, playfully conceptualized at best.

HN: I don’t mean this as a token question, I really want to know how you see your own musical connections. You obviously all play with a ton of other people in great bands like Cursive, Big Harp and Oquoa. What makes this group singular? What’s in the creative well of The Good Life that makes it exciting (or even necessary) to come back to?

Stefanie: We love playing together.

Tim: I’d say we’re good friends … catalogue.  I think that I miss the catalogue after a while.  I truly don’t mind, I actually kind of look forward to doing a tour where it’s like it would be really exciting to play the new record, but it’s also fun for me going out with these different projects over the years … [The Good Life] is a different experience for me, and one that I can look forward to. 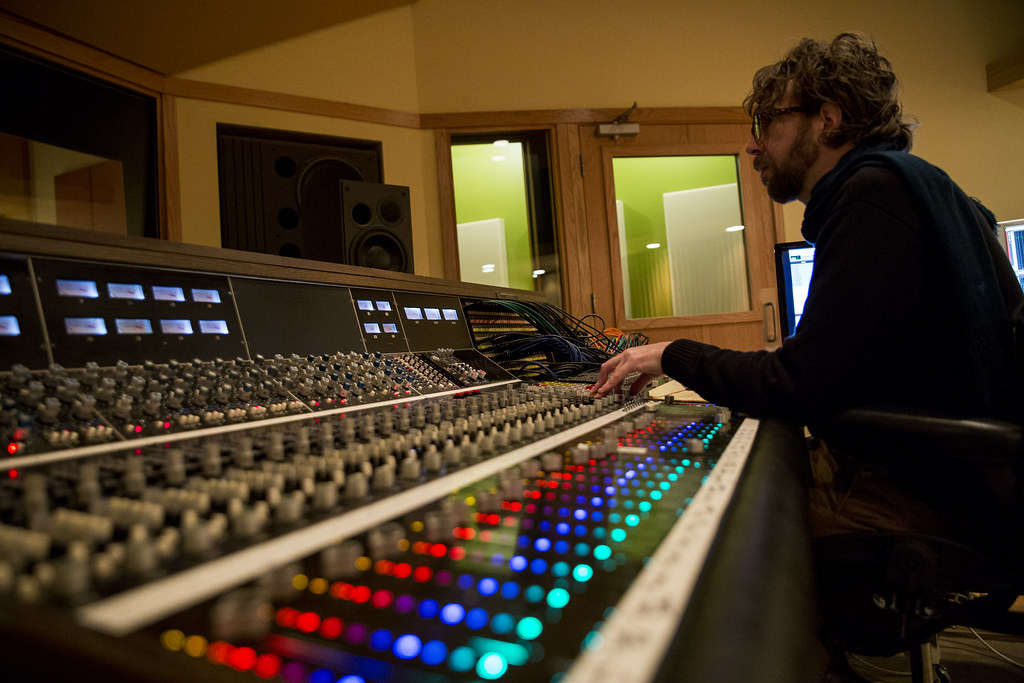 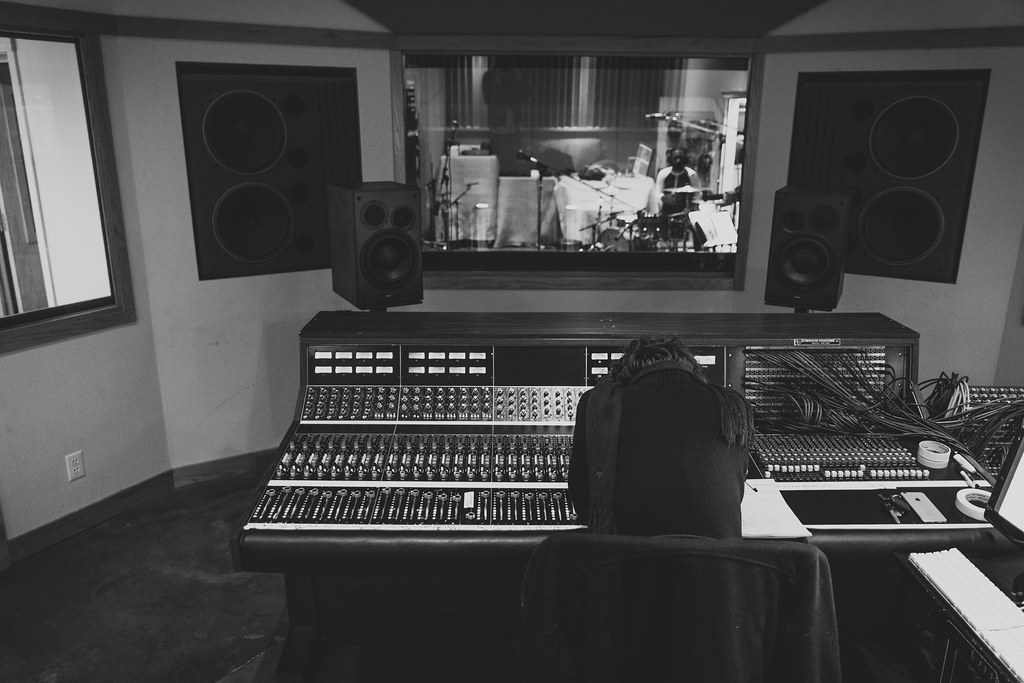 Producer and sound engineer Ben Brodin at the console of ARC’s B Room.