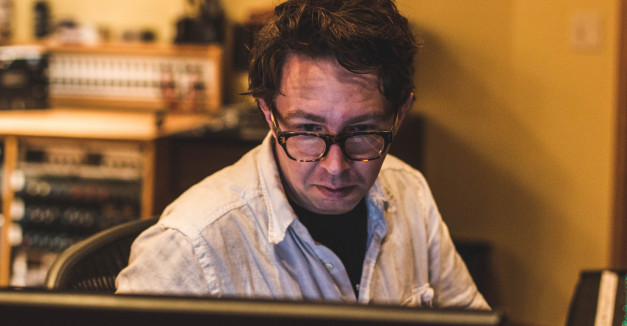 [Editor’s Note: ARC Studios has recently launched its new website, as well as lowered the rates for studio time in its B Room. Find more information in the story, and contact ARC directly for pricing questions.]

It seems like an ideal point of stasis, like a temperature somone calculated in a distant lab for optimal studio comfort or, perhaps, for strings, snare keys and vocal cords to remain aligned. Maybe it’s the temperature at which everything in the Omaha recording studio maintains its acoustic perfection, where the odd polygonal shape of the B Room works in infallible harmony with the sounds coming back off its cream-colored walls.

Such meticulousness would be fitting for the hyper-designed look of studio and the bevy of high-priced equipment in the room. Much of it is vintage, including the 1970s, 48-input API console that engineer Ben Brodin is manning. Glowing luminescent green, blue and purple, the console looks like the control panel of a spaceship, and no knob or slider appears out of place.

Everything looks exemplary in the Mike Mogis-owned studio, so what happens inside it can be fundamentally malleable.

“You have a new book out … tell me about it,” Brodin jokes in a deep NPR-affected whisper to Megan Siebe, the cellist sitting on the other side of the B Room glass. On this night, she’s recording both written and improvised string parts for a new Simon Joyner full-length. The legendary Omaha songwriter is watching from behind Brodin on the B Room’s maroon couch. 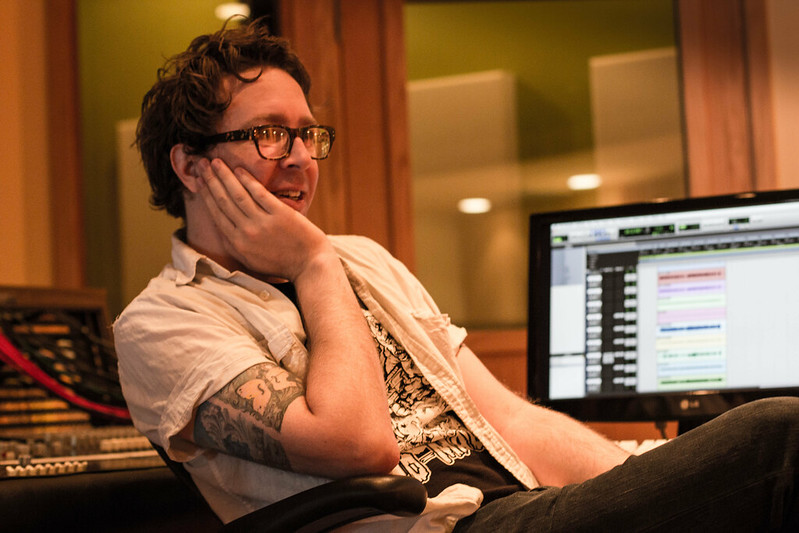 During this session, Joyner is the architect. The songwriter’s forthcoming new LP — his 14th outing — seems busily arranged, even if the bolts of the songs were recorded live in-the-room at ARC one month earlier. Joyner sits, and waits for cello sounds.

“We’re gonna stress Simon out if we talk too much,” Brodin says, smiling and reining it in. He’s friends with Joyner and has worked previously with the songwriter — who he calls one of the best in the world — mixing Joyner’s last album, Ghosts, at ARC.

Ultimately, Siebe will nail her cello parts in a matter of a few takes. One is entirely improvised, something the classically-trained string player can handle.

This is the careful, planned and unplanned balance that can live at ARC. It’s a convergence of creativity meeting rigidity, where perfection meets imperfection, where electrical engineering meets art. It’s where sterility is exactly what you need, until the moment you need dirt.

“It’s the weirdest job I’ve ever had,” Brodin says. “I’ve sold vacuum cleaners door-to-door. I’ve worked in an ICU. This is the most varied. The skillset is all over the place.” 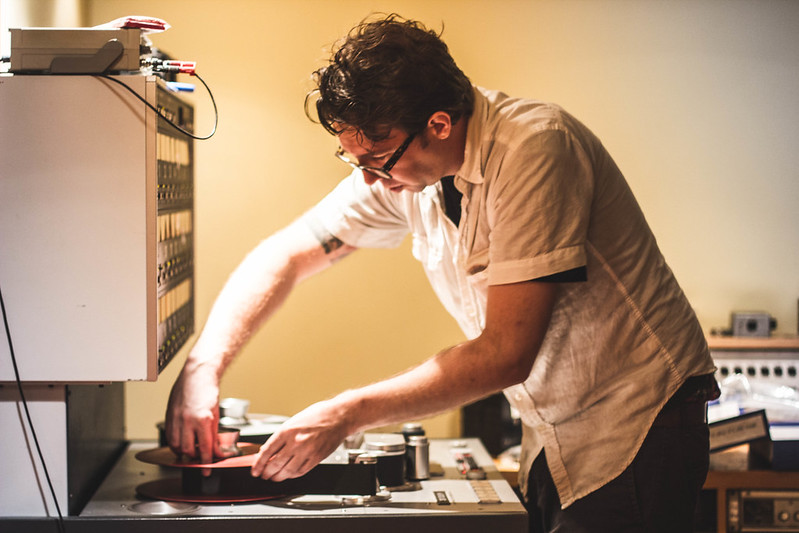 “You should be learning something new every session,” Brodin says. “I certainly am.”

The jazz-musician-turned-engineer has been working out of ARC’s B Room the last four years. The studio — with a name that’s self-effacing shorthand for “Another Recording Company” — has been in Omaha since 2006. It’s a two-part complex behind Mike Mogis’ home in the Fairacres neighborhood, north of UNO’s Dodge Street campus. Mogis works out of ARC’s A Room, similar-looking to the B Room, but with more isolation rooms and the legendary Neve console originally commissioned by Beatles producer George Martin.

And it comes at a higher price than time the B Room with Brodin, who have more often hosted topflight Nebraska names like Orenda Fink, Jake Bellows, Brad Hoshaw, Pro-Magnum, Noah’s Ark Was a Spaceship, as well as Josh Hoyer and the Shadowboxers just this past weekend.

As an eight-year Omahan (a Minnesota native), showgoer and a willing musical collaborator, Brodin isn’t starting most of his Nebraska sessions shaking hands with a stranger. Even so, trust is built through studio time, he says. Working with Joyner before gives them an interpersonal head start on this new album.

“It’s much easier [to work with someone] the second time because, truly, a lot of this job is psychological,” Brodin says. “Even engineering, it’s not just sitting here saying, ‘You wanna do another one?’ You’re reading performances and faces and hearing how they talk to other people in the band.”

And on this night, even without a producing credit, Brodin acts as a kind of critical interpreter for Joyner’s many ideas. He’s comfortable enough with Joyner, and vice versa, that these conversations falls within the engineer’s purview.

Joyner is calm on the couch, but ponders the questions very deliberately, with his cheekbones and the lines of his mouth. While he nurses a Heineken, there are empty Busch cans still sitting near an otherwise pristine 24-track Studer tape recorder, the remnants of a weekend Pro-Magnum session. That one was louder, wilder, less clothed. 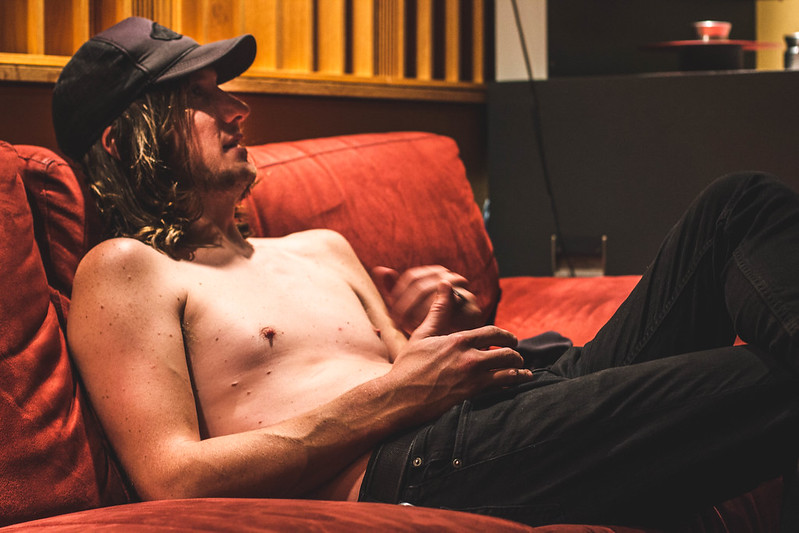 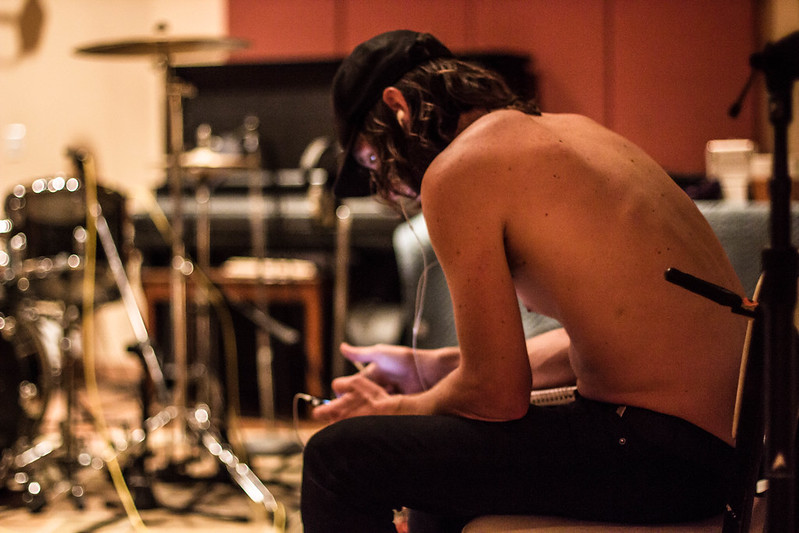 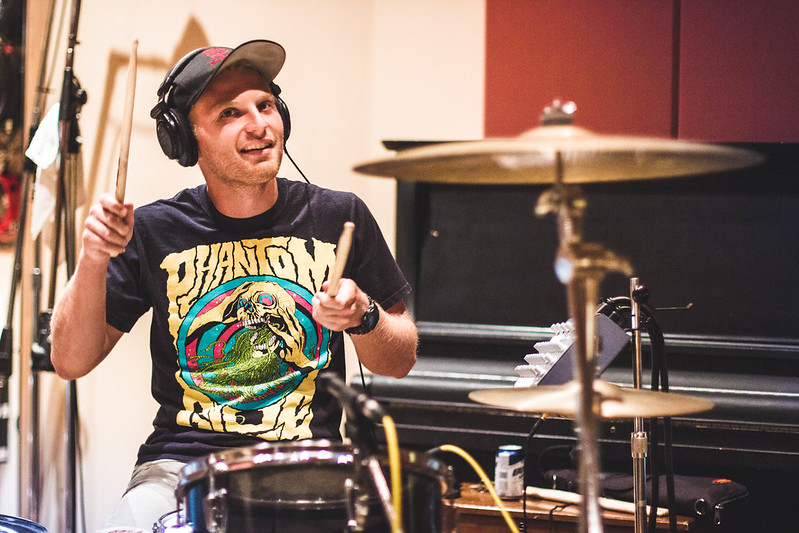 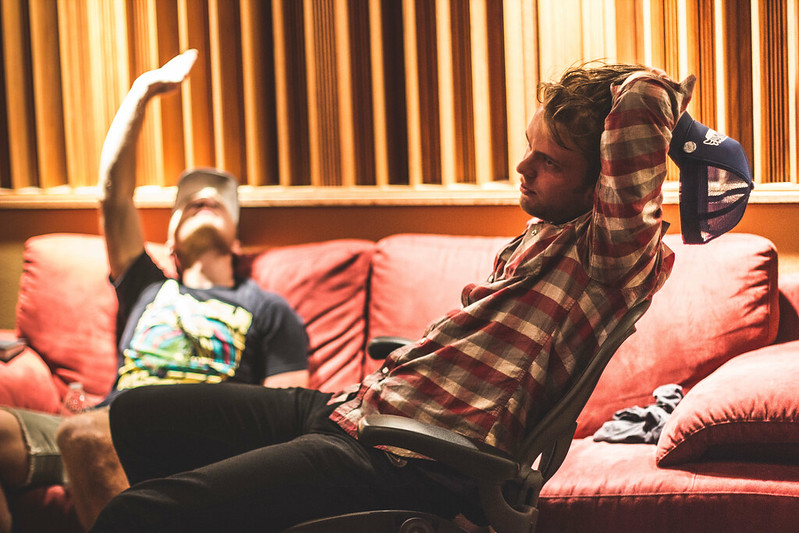 Eventually, Joyner leaves the booth and enters the studio — now, more relaxed than just composed — to record guitar and vocals on a straggling song called “Some Fathers.” And when he sings out in a resonant version of his speak-and-yawn style, the roundabout cowboy lullaby takes on the quality only the most gifted songwriters can produce: You imagine the song exists somewhere else as a full entity and Joyner just brought it wholesale into this world. His voice is something both biological and immeasurable, simultaneously invoking both poetic yearning and tonsils.

“When I write a song, I’m already thinking, ‘This would sound so much better if there was a drummer playing right here,’” Joyner says. “There’s so many ways you can record a song … which way will be the way it will be thought of? I get serious about how I want to capture it that one time.”

At some point in the tracking of “Some Fathers,” Brodin decides he’ll surprise Joyner — a noted lo-fi pioneer and analog enthusiast — by recording to the Studer tape machine. That’s the level of technical and personal, if not conceptual, ease surrounding the session.

“If it distorts, he’ll love that.”

As Joyner closes in on the fourth and final take, he sings less like a rust-throated orator and more like a classical folk singer. Still, some of the louder notes, those sudden Joyner crescendos, throttle the Studer’s gauging needles like a rattled seismometer. Ultimately, of course, this engineering trick works out, too, and Joyner seems genuinely delighted about the surprise tape recording. 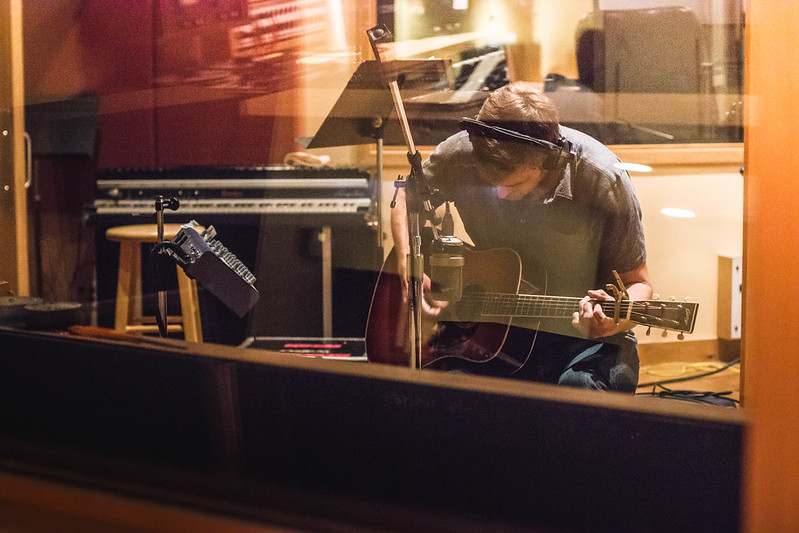 On this night, it’s very clear Brodin is playing a small game with a friend and recording veteran and not on him. Yet, knowing which emotional buttons to push as a working engineer can be nearly as important as the ones on the console. A key component of his job is feeling out the mood in the room, and picking his spots when vocalizing patterns, problems and possible solutions.

“Even if you sense something is the truth, presenting it right now [might] be demoralizing or will damage the session,” Brodin says. “I always feel funny about that stuff because it’s manipulative, but for most bands coming in, [this is] a weird experience. I mean, look at this place. Suddenly, they’re in this expensive and strange-looking environment that’s really quiet. They just need a friend.”

Whether it’s a band that lives a few miles away in Dundee or commutes from across the Atlantic, Brodin says the synthesis of world class equipment and production work in a relatively inexpensive room is a rarity.

Last year, the Italian band News For Lulu traveled to Omaha to record its album Spring Burns/Alleys at ARC. It was more cost effective for the band to fly to Omaha and stay at ARC’s guesthouse than find a space of comparable quality in their own country. Brodin estimates one day in a B-Room-esque space in some other major American city would run a band $600-$800 a day. One day at ARC’s B Room is more in the $200/day range.

“A studio couldn’t run for less than this, even it was a one-room studio,” Brodin says. “It’s really important to me to get bands out of their basements. Save up a little money, and you can make high quality professional recording in this space. It’s like a public service.”

There’s a keen empathy involved in Brodin’s process, as well; he knows what it is to be on the other side of the glass. It’s not a rarity for him to join other notable bands on their records, providing extra parts or instrumentation.

“The cool thing about this job is you’re always picking up other instruments in the context of recording,” he says. “Like it sure would be great if we had an upright bass … well, I’ll Google it and try. It’s a jack-of-all-trades, master-of-none thing … But I like that kind of thing.” 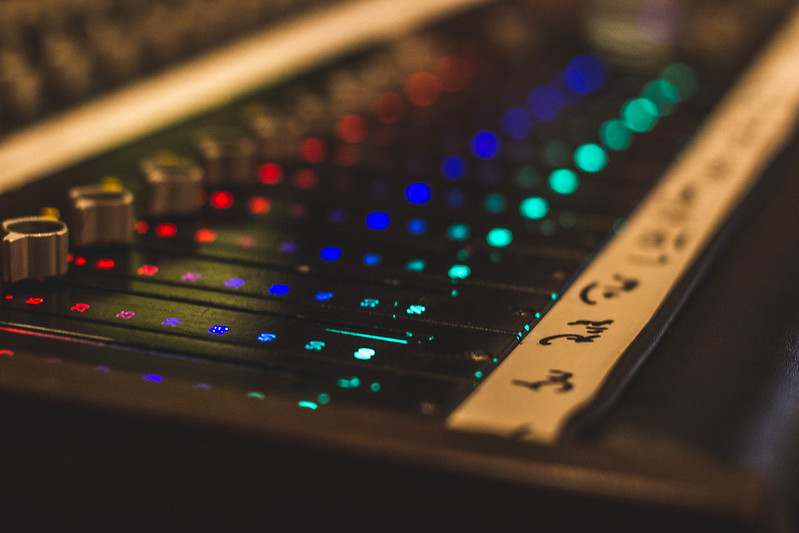 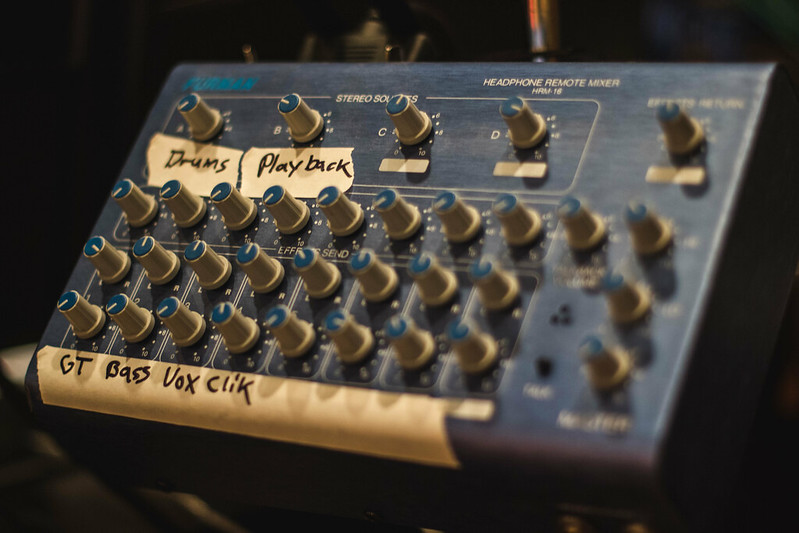 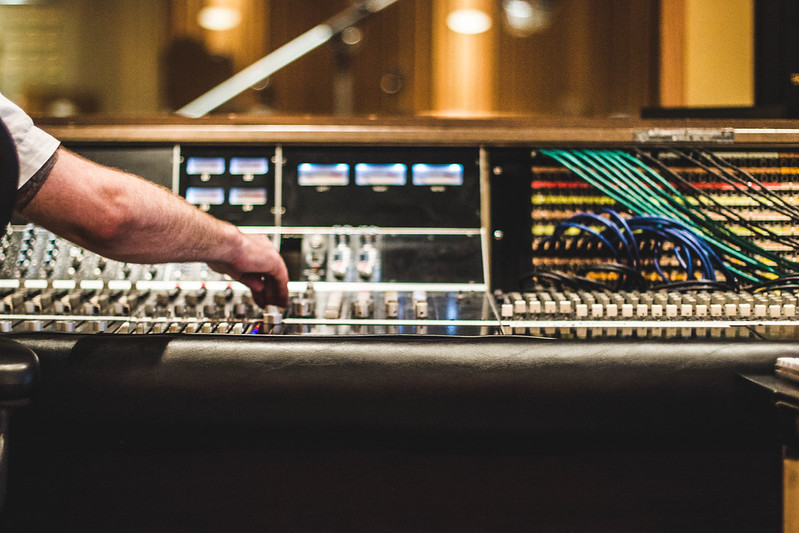 For instance, Brodin co-produced Orenda Fink’s new Saddle Creek release, Blue Dream, at the same time as playing all the album’s electric guitar parts. For Jake Bellows’ latest, New Ocean, the engineer embarked on a whirlwind five-day session, playing drums, piano, guitar and organ. Bellows, Ryan Fox and Brodin worked from a pool of 30 songs, never having played as a band before. When Brodin leaves the booth, showing someone else which two keystrokes start Pro Tools recording is easy enough. Adjusting his own headspace is often the hard part when the performance shoe is on the other foot.

“They’re totally different sides of your brain,” Brodin says. “Like, ‘Oh now be creative!’ ‘Ok, now focus in on sound.’”

But the cerebral dissonance hasn’t stopped him from doing both, or from playing on and assisting Mogis on even larger releases at ARC, like Jason Mraz’s fifth studio album Yes!, to which he added piano, percussion and organ. It’s not dissimilar from the duties he also performed on First Aid Kit’s latest, Stay Gold. Those albums came out on Atlantic and Columbia, respectively.

“As far as the recording of [major label] music, it’s amazing how it’s not different … there aren’t really any tricks,” Brodin says. 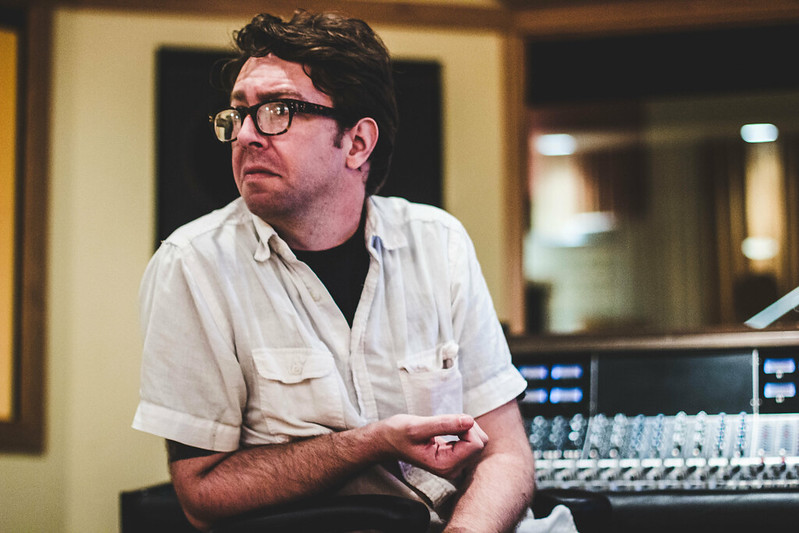 Moreover, exposure to sessions like Jason Mraz’s have pressed Brodin to separate his own tastes from genuine appreciation for how a session is going. It’s an intellectual maneuver he thinks any good engineer is obligated to make.

“Mraz is just a startling singer,” Brodin says. “Literally every take of every song could be the take. Right there. Untouched.

Mike told me once: ‘This job is cool because it really makes you question your own coolness.’ You might think this music is cheesy, but it’s going to sell half a million records. There’s literally millions of people in the world this music touches.”

And this is a moment where Brodin appears not only a technical professional, but his training as a musician and holder of a philosophy degree from UNO seem to matter more than lacking academic training in sound engineering. Like both Mogis brothers, Brodin is self-taught, has learned through observation or simply being behind the console. If he doesn’t feel personally moved by music, he says he’ll zoom in for facets that will stimulate him in an earnest and meaningful way: the tone of a given vocal or how a compressor “grabs” on a certain frequency.