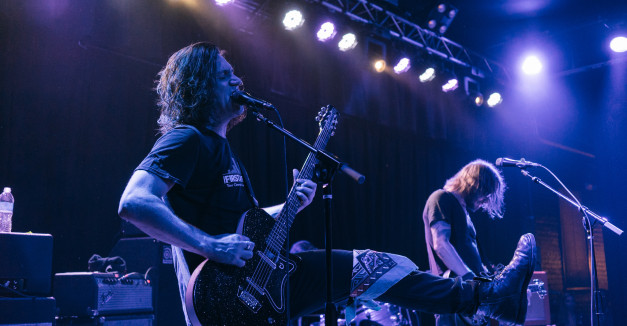 It’s nearly unavoidable to see a show in which Conor Oberst is involved and not consider or comment on his rotating ethos machine in some way. Forget swapping hats; performing in that many different projects and writing for myriad genres requires a veritable millinery.

I had visualized this whole ordeal where I’d tell you all about it, and then I scrapped it. We’ve recounted that topic plenty in this space, so I’ll spare you the full monty. And besides, last night wasn’t about Conor Oberst the man, no matter how many Omaha denizens in a nearly sold-out Waiting Room uttered the name first and “Desaparecidos” second. If one had to assess him in the broadest way possible, suffice it to say that he’s evolved.

Last night was about Desaparecidos’ screaming for social justice, mocking the ridiculousness of talking heads and semi-political figures and trying to make sense of confusion. It was about blasting through mini-vignettes of love lost and wearing one’s heart on one’s sleeve. It was about playing as fast and loud as human tendons and muscles will allow. At those things, Desaparecidos, Torrence, Calif. band Joyce Manor and St. Joseph, Mo., punk rockers Radkey excelled.

In an effort hit the sweet spot between glossing over last night’s details and outright bloviation, here are three things I saw, heard and felt that struck me.

Prologue: Since I’ve already broken the fourth wall (and in so doing, have broken one of my cardinal rules), let’s get this out of the way: I had not seen any of these three bands before last night. That’s not a particularly rare pool to be in until the addition of context. Radkey calls St. Joseph home (less than three hours away and just one from my hometown Kansas City) and plays in Nebraska frequently. Hell, I hadn’t ever seen Conor Oberst perform live in person in any fashion whatsoever until last night (high school Stellmon would be so proud).

Bear that in mind, if you would.

1. Radkey’s hard-rocking self-awareness. “We’re Radkey, and that’s what the fuck’s up right now, so…” and, guitars aloft, power chords ablaze, the fraternal three-piece was off like a bat out of hell. Songs roared by like speed metal trains, Isaiah and Dee Radke’s vocals echoing and dark like a Wolfmother-Billy Idol cross, especially for “Dark Black Makeup.” It never felt hurried, though, and as hard as Isaiah bobbed his head and Solomon flipped across his drum kit, the guys traded a little bit of mobility for cleanliness and accuracy. Just 15 minutes in, Isaiah rattled on about being called a hardcore punk band, “and we believe it.” That launched them into sixth-gear. As he aptly put it, you can’t be called a thing and not be fast enough.

2. Barry Johnson’s heart. If Radkey’s top speed was unmatched throughout the night, their urgency was blown away by Joyce Manor. Johnson, the band’s rhythm guitarist and endearingly earnest vocalist, spouted minute-long vignettes on hanging at parties and being uncontrollably sentimental. “Heart Tattoo” is a case in point, where Johnson’s bleeding heart is literally permanent. Joyce Manor’s catalogue is largely built on bursts like that, as if Johnson has something to say and will stop at nothing to get it out as fast as possible. It felt a little like Crash and the Boys, but much more charming and melodic.

3. Desaparecidos’ homefield advantage. For all of the checkered history between Oberst and his hometown, last night felt like a more appropriately warm homecoming. Hard to tell if that was where their energy came from, but the way that bassist Landon Hedges and guitarist Denver Dalley mingled with the crowd during the openers, everyone seemed wholly relaxed. Even Oberst endeared himself to Omaha during an extended, cautiously optimistic, socially conscious monologue. Concordantly, Dalley, hair billowing from the fan blowing up at him, ripped solos on “Slacktivist” and searing noise from his guitar on “City On The Hill” as if exercising demons. Hedges shined as the thudding soul of Desaparecidos, shouting and rattling through the band’s personal record 80-minute set. And no one hit as hard as drummer Matt Baum, who capped the night by being carried from the stage to the bar for well-earned celebratory hydration. 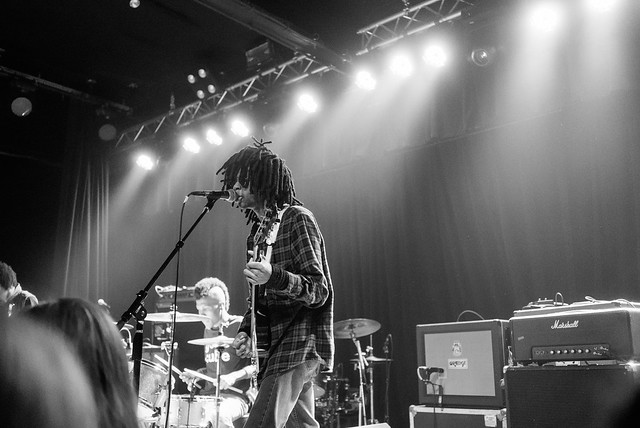 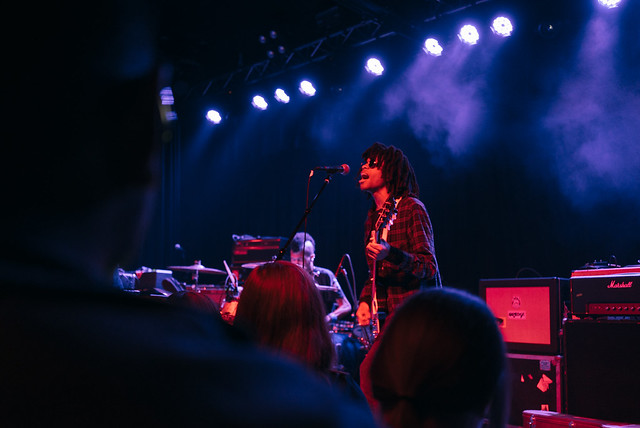 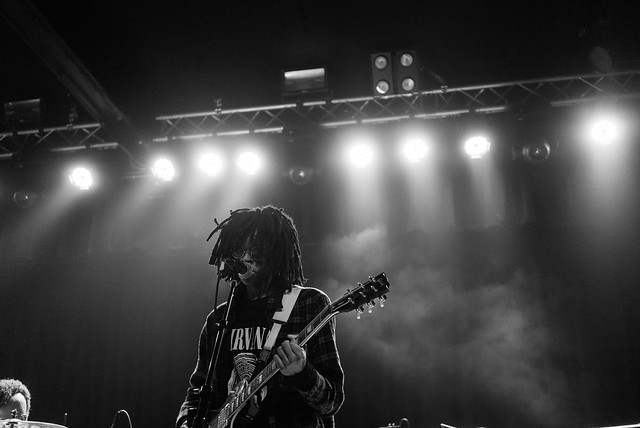 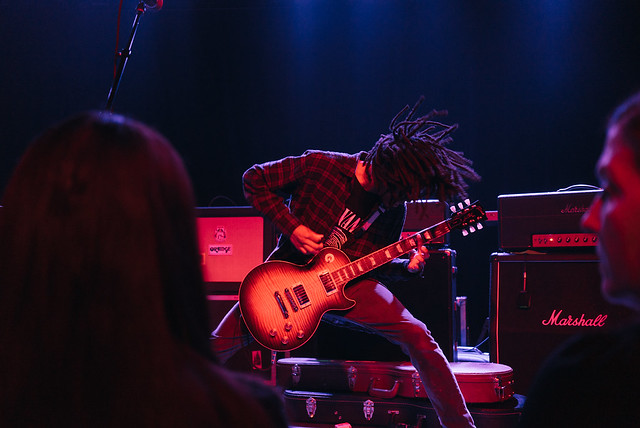 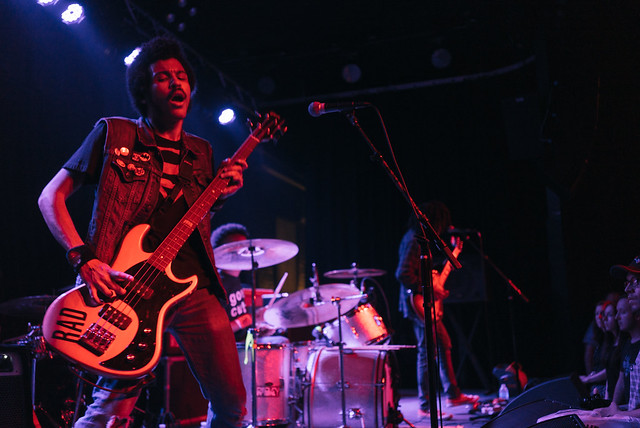 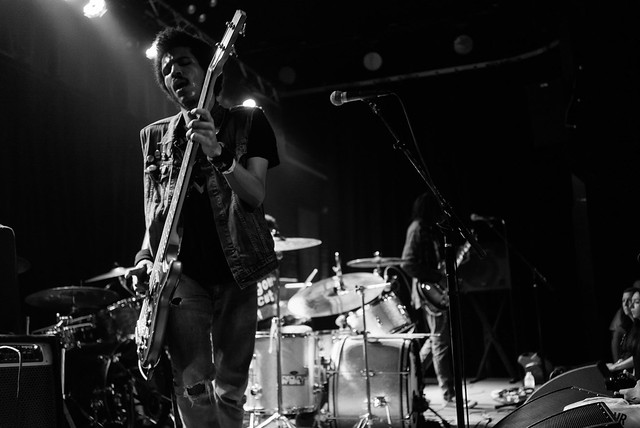 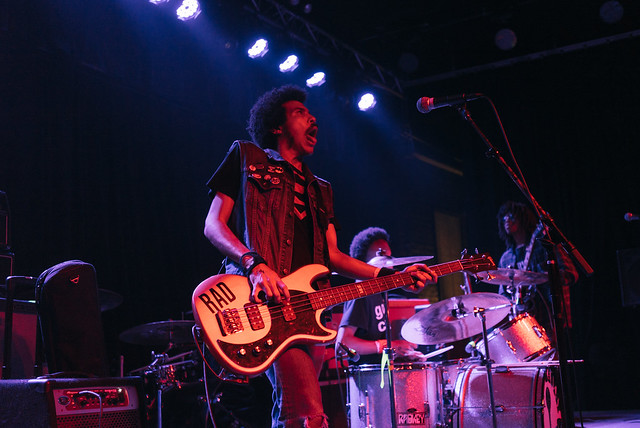 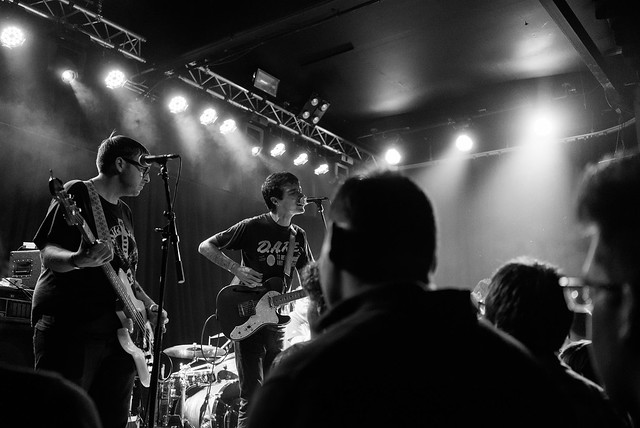 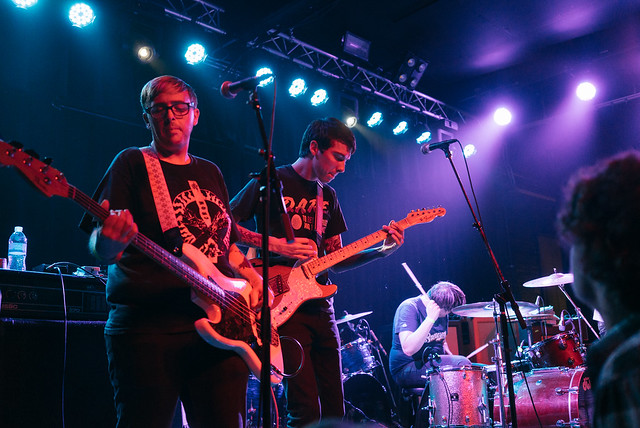 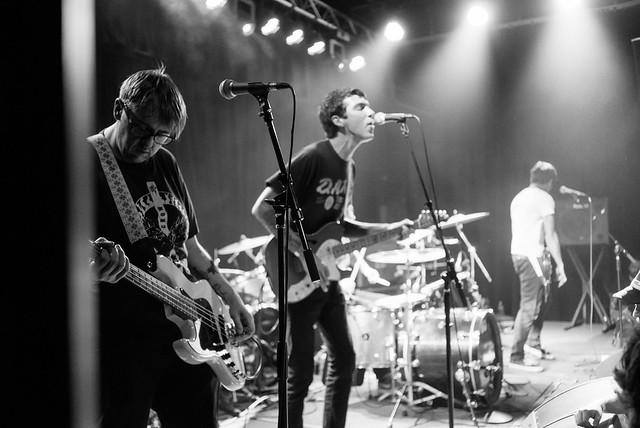 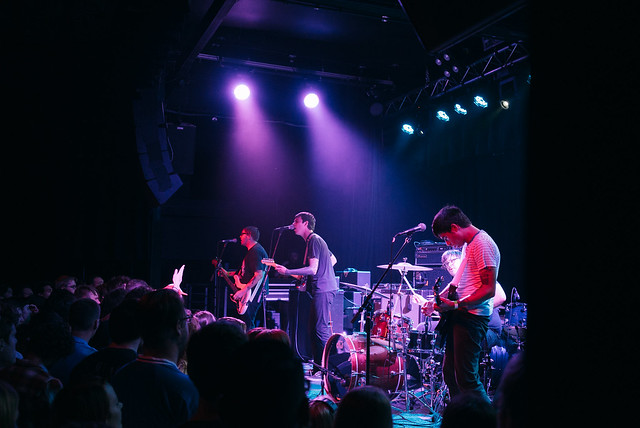 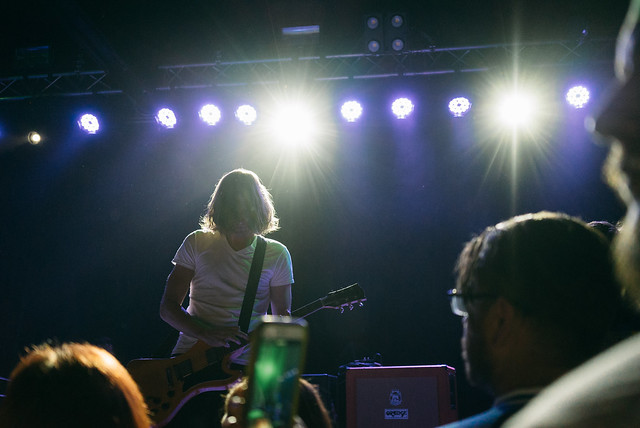 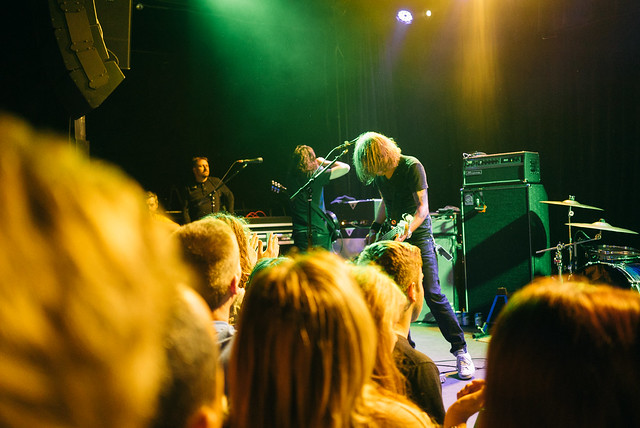 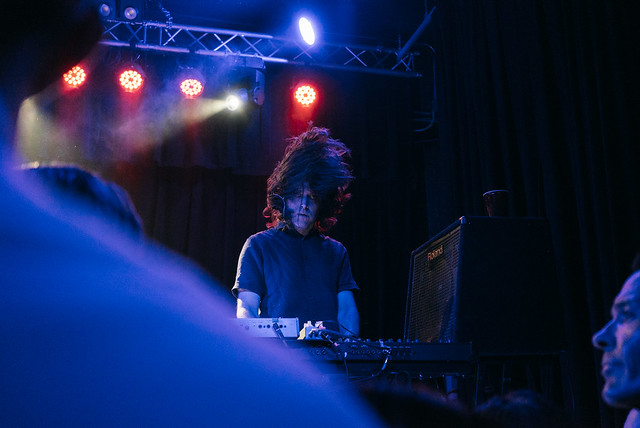 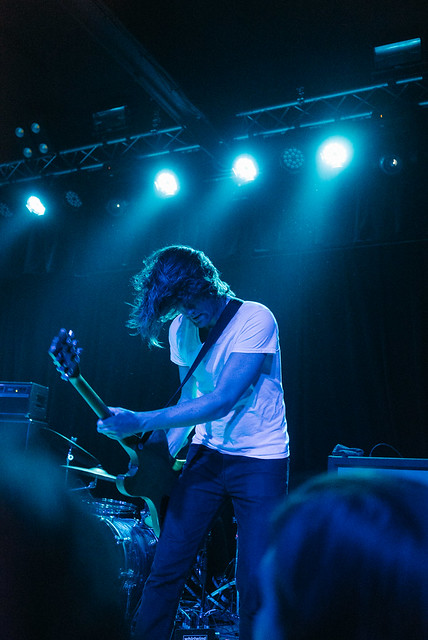 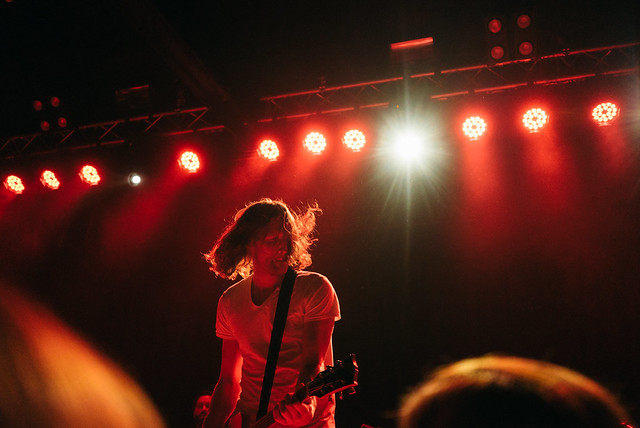 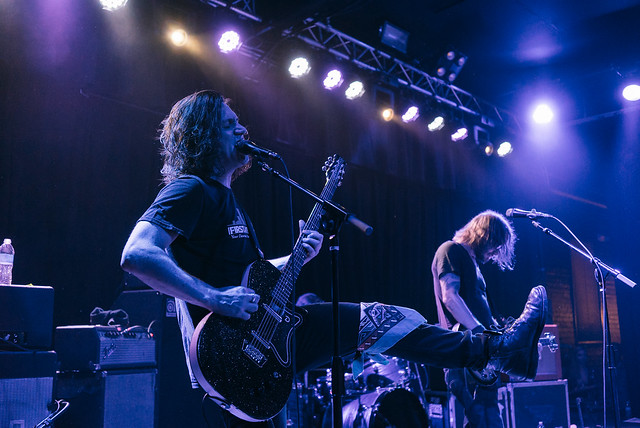 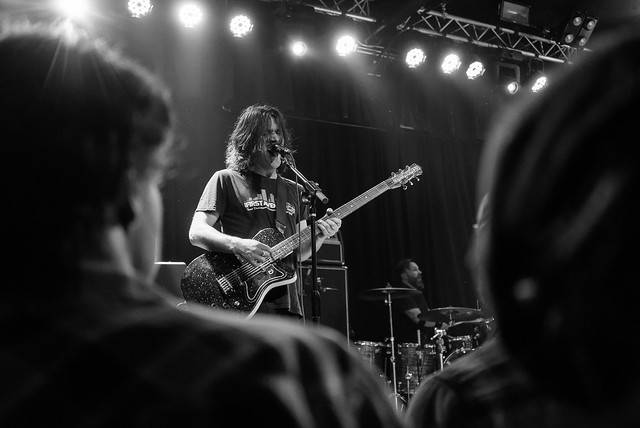 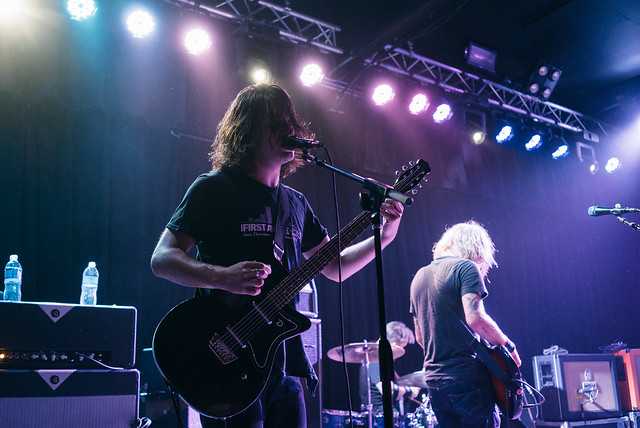 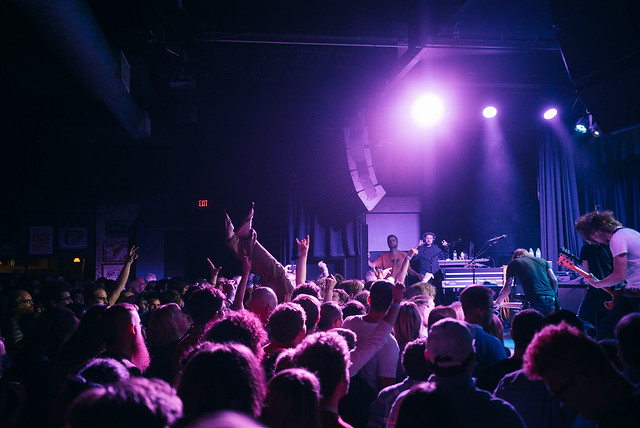