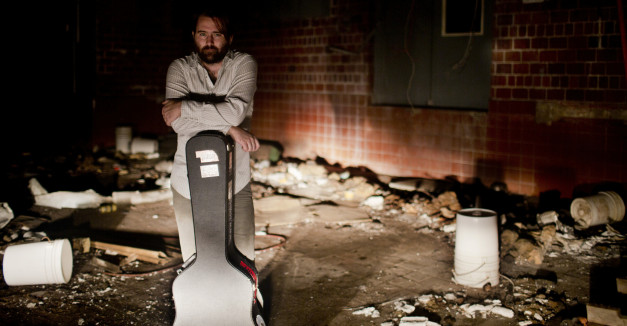 After the drugged-out line cook, the church-reliant martyr, Bonehart Flannigan’s “Sweet Release” seems to turn on its author. In a song more about letting off painstaking steam than absolution, the narrator finds his in a woman who cares for him against the odds. Perhaps more than any of the folk songs by Lincoln songwriter Jon Dell (a.k.a. Bonehart Flannigan), “Sweet Release” is aching for a kind of transparency.

Several other Bonehart songs smile wide at the rough-necked hopelessness of the lives they recount. What other choice is there? But even as it’s part gospel, “Sweet Release” drips with its meta-comment. This music is Dell’s “Sweet Release.” He’d never scream into the song’s conclusion if it weren’t.

Dell is slated to release his debut album, Backpacks and Mason Jars, on Sower Records at the beginning of next month. O’Leaver’s will host the Omaha release show on Oct. 2, and Duffy’s will host its Lincoln equivalent on Oct. 10. Following those shows, Dell will take off on a still-expanding national tour.

For me, the beauty of the brick-wall-shadowed video below is that it hauntingly provides some vision of many artists’ internal experience: screaming into the darkness and the wind and the industrial jetsam all on the wing of a faulty prayer that someone will hear.