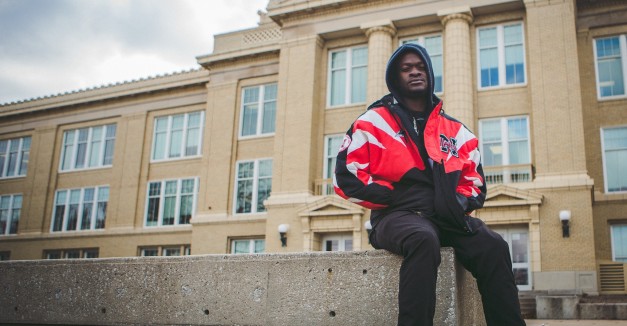 There’s a book about Complex founder and designer Marc Ecko’s entrepreneurial sucess buried somewhere in Darrel Ofodirinwa’s basement studio. Probably near his copy of his favorite rapper Jay-Z’s documentary Fade To Black, which he estimates he’s seen more than 100 times. He can recite nearly every word.

Add that to countless hours of Hot 97  and Breakfast Club interviews and success stories, and find yourself in the classroom of Lincoln rapper Scru Face Jean. “The new college,” he calls it, where an up-and-coming rapper like himself can learn from the trials of others who have already climbed the ladder from independent artistry to mainstream success.

“The way I look at it, the Leroy Cohens, the Russell Simmons’, when they started hip-hop, they were more like us than the generation after [theirs],” Ofodirinwa says. “We’re privileged to more info, but when it comes to the indie market, it’s the Wild West still.”

Ofodirinwa tells me this one brisk December evening as we sit in the DIY-soundproofed basement of his Northeast Lincoln home, flanked by both his girlfriend and his partner/producer Clinton Ohamara aka DoeDoe. After returning home pre-Thanksgiving from his third nationwide tour this year, he’s decompressing a bit, but already planning his next trip in early 2016. He’ll perform his last show of the year Sunday at hometown venue Vega with Omaha rapper and frequent tour partner Skate Maloley (RSVP here).

Up until a few days ago, Ofodirinwa and Ohamara were somewhat overwhelmed by February, during which they’ll embark on the first Scru Face Jean headlining tour. Ofodirinwa models the frequent-excursion strategy after Indianapolis-native rapper Mark Battles, with whom he just toured. Now based in Los Angeles, Battles hits the road every two to three months, taking care to pop-up in the same cities as before.

Ofodirinwa is the latest in a lineage of Midwest hip-hop trailblazers. He credits Kansas City, Mo., rapper Tech N9ne as one of the first major independent artists to break into the coastal regions. He’d take LA rapper Hopsin on tour with him, who would then bring Dizzy Wright to those same cities. Wright then turned around and took Mark Battles on tour, who then booked his own headlining trip, bringing Scru Face Jean along.

“Hip hop, if you know the history, it’s like school in a weird way,” Ofodirinwa says. “It seems like everyone goes to middle school together, then they go to high school, then it seems to culminate on that freshman cover. If you study all the people on the pages, they all work together.”

With so many emcees vying for attention, Ofodorinwa see this pattern as a necessity. If you’re not consistently in front of your audience, it doesn’t matter if you’re Shawn Carter’s second-coming.

“You can be forgotten,” Ofodorinwa says. “It’s not like [fans] don’t have options. I’m competing with the entire Midwest.”

Those classmate-like associations proved themselves fruitful at the end of his most recent tour and, perhaps, his most surprising show. When his Nov. 21 Denver concert with Mark Battles fell through, he reached out to Skate Maloley, who placed Ofodirinwa on a bill with he and Derek Luh. He wasn’t on any promotional material, but his day-of tweet about the show was quickly shared more than 1,000 times.

As he was about ready to go onstage, producer Zave introduced him. Y’all know Skate is from Nebraska. I know y’all know somebody else from Nebraska. Scru’s name rushed through the crowd like wildfire. It blew his mind.

“When I came out, the sound of the crowd was unreal,” Ofodorinwa says as he shows me the phone video he captured. Screams erupted when he took stage. These were real fans. Not just people excited about his name or the act he was opening for, but people that listen to Scru Face Jean on a regular basis. They knew his lyrics like you might know the words to “99 Problems.”

It was the final push they needed to book the first Scru Face Jean headlining tour, for which they’ve now cobbled together 11 stops. But one can’t tour that hard without a quality product, which Ofodorinwa says he’s finally perfected. He calls his music a blend of “righteous and ratchet,” on perfect display in his most recent release, the Another Night mixtape.

At my prompting, he remembers something he told HN in 2011: “I feel like a lot of rappers around here try to make music for an audience that isn’t real.” His voracious appetite for information and keen eye for style while on the road allowed him to be in touch with his music and how fans from different areas reacted.

“You start seeing the way you look at things, you see so many more people, deal with every walk of life,” Ofodorinwa says. “When you’re on the road that much, you can’t help but to have it rub off on you.”

Black Caesar, his 2014 release and most commercially successful album to date, was probably more harsh on his fans — whom he says are mostly white — than he would’ve admitted at the time. Open about it now, he says he dialed back the “righteous” in those lyrics, hiding it behind big, energetic hooks. As his audience has expanded, he says he’s soaked up what he’s learned and distilled it into something both artistic and palatable.

“People listen to beat and melody,” Ofodorinwa says. “You can slip [political and social messages] into the verses and have the beat be the turn-up.”

For evidence, look no further than Another Night’s 96-percent rating on premiere mixtape website Hot New Hip-Hop. It posted on October 17, and almost overnight he shot to number-three, surpassing the likes of Rick Ross and Young Thug, in good company with J Cole and Ty Dolla Sign.

When Ofodoriawa tells me this, the stars in his eyes light up in delight and disbelief, which probably stems from the fact that he and Ohamara do everything themselves. They are their own promotional machine, record label, booking agent, travel service. Anything Scru can’t handle alone, DoeDoe does it.

In the end, he likes it better this way. It forces people to be actual artists. He compares it to a sculptor, who has to consider not only design, but how his bust will set, how it will be perceived by patrons.

“You can’t just write lyrics and walk away,” Ofodorinwa says. “You have to think about the way to package the lyrics. And not only how you package the lyrics but how you’re gonna deliver that package. All of that is art.”

Hours and hours of devouring every interview and tip and success story has led them to this point. Scru Face Jean is still on the way up, and even he can’t believe it.

After the February tour, which will also end at Vega, he tells me there’s a chance that he could be opening for a big name rap act. It’s unconfirmed, but to him it doesn’t matter. When it comes to opening, he’s checked many boxes: Kendrick Lamar in Nebraska, Future in Texas. He tells me 50 people in Boston would mean more. The learner is becoming the master, the conqueror of his own frontier.