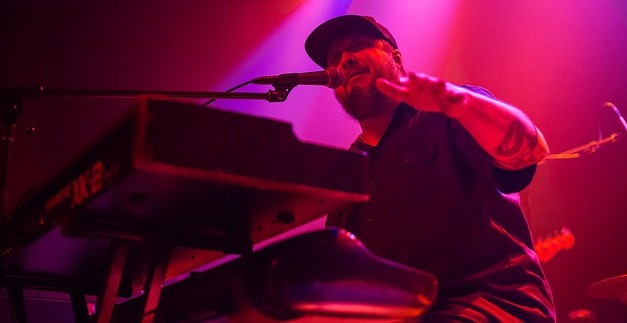 You’re hearing the journey on Running From Love, the new record from Josh Hoyer and his players: once The Shadowboxers, now Soul Colossal.

The album sounds born of and feeding into the same all-consuming path that compels Hoyer to adjust and tighten his lineup, to throw downtown Lincoln bashes for release shows, to tour the country multiple times over and to record in Nashville with Wilco and Uncle Tupelo producer Ken Coomer.

The third studio record from Hoyer and company, Running From Your Love presents a band somewhere in the middle of its chase. You may miss the earworm funk magic of the Shadowboxers’ January 2014 debut, much in the way you miss yourself at your most fresh-faced. Running From Love lands on its work-boot-clad feet and in your ears as effortful. Its ten songs are both explicitly and more quietly about that effort invested achingly into love, political unity and playing in a band. The hooks may be abated, but this entry pushes the soul ensemble closer to a kind of genre expertise.

Ultimately, it’s Hoyer’s best-sounding production slate to date, as he cycles from confessor, to instigator, to rallier in front of band now inseparable from its increasingly group-formulated material.

You can buy the record now via Silver Street Records and listen to our podcast review below.

Recent On The Record episodes review The Thermals, McCarthy Trenching, Anna McClellan, The Good Life, Desaparecidos, Digital Leather, Big Harp and more. Listen to all the past episodes below, or subscribe to Hear Nebraska’s podcasts on iTunes or your podcast app.