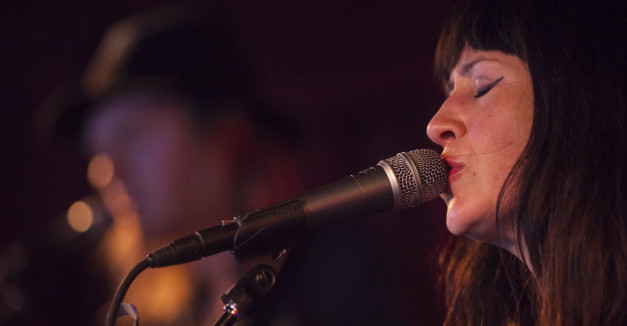 After releasing Nebraska’s most pristine record of last year, and touring across countries and continents, the remainder of Orenda Fink’s 2015 plans sounds like a bit of stretching out.

Before she plays our Hear Omaha series this Thursday at noon (on 13th and Howard), Fink tells us she’s working on a collection of her sonically eloquent cover songs, an electronic project with spouse and The Faint frontman Todd Fink, and she’s part of the brand new band High Up, which plays its first show at Pageturners Lounge in a couple weeks.

Fink will no doubt play a selection of songs from her 2014 LP, Blue Dream, on Thursday, but we’re also looking backward in this piece, with the digital premiere of a remixed Fink song.

2011’s “Mighty Mist” came out on a limited 7-inch run via Bocca Lupo Records, with the O+S song “New Life on the reverse side. It was recored and fleshed out instrumentally by Ben Brodin, endowing visual metaphors for depression with darkness and personal stakes. Brodin recently remixed both songs, and “Mighty Mist” is streaming below. If you’re interested in a proper download of “Mighty Mist” and “New Life,” they’re available June 16 via Saddle Creek’s website.

Hear Omaha is made possible by the Greater Omaha Chamber of Commerce. RSVP to the Facebook event here.

Hear Nebraska: “Mighty Mist” feels like a more turbulent and unresolved song than anything we get on Blue Dream. Was it coming from a dark place in 2011? Or would you call it a more general exploration of depression?

Orenda Fink: I have struggled with depression in the past, and this song is kind of like an offering to the “gods” so to speak.  I guess you could say it’s my version of Cat Stevens’ “Trouble.” I can’t remember exactly what was going on when I wrote it, but it doesn’t sound like it was a good time, haha.

HN: So in terms of post-Blue Dream performances — I’ve seen you solo, in a duo with Todd [Fink] twice, and in a trio with Greg Elsasser and Jiha Lee, all of which gave really different looks to the songs. Is the live arrangement or reimagining process something you enjoy?

OF: Yes, I do enjoy it actually. It keeps the songs fresh for me and it’s always exciting to work with new people and hear their interpretations of the music. I’m not a stickler for the live performance sounding exactly like the record. The songs are free to live different lives.

HN: Seeing you do a “Wish You Were Here” cover for the Omaha Gives event at Slowdown kind of crystallized a thought I had about your covers. I tend to think covers are most interesting when an artist has a really defined idea of how they sound and the cover is reinterpreted through someone’s genuine voice/sensibility. Same goes for your versions of “Nebraska” and “Do You Realize.” Have you always been adept at covering songs and still sounding like yourself, or does an artist grow into that?

OF: Thank you! I’m not sure where along the line doing covers clicked for me, but these days I do pay special attention to songs that I know I can carry vocally in my own style. And there always has to be that special something about the song that I can lose myself in. I’m actually starting work soon on a covers EP. I’ll be trying a few new ones out at the Hear Omaha show.

HN: Have you done any new writing since Blue Dream came out?

OF: I’ve taken a little breather from solo writing for right now. Blue Dream was so emotionally dense that I don’t feel quite ready to “follow that” per se. But I’m enjoying writing for a few new projects: my husband, Todd and I are beginning work on a new electronic band that will be just the two of us, and I’ve been co-writing for High Up, which is also a new band featuring my sister, Christine, on lead vocals. Our first show is June 22 at Pageturners Lounge.

HN: I wanted to ask about something a lot of touring artists reckon with, but I think it’s almost more interesting because your songs can be so otherworldly and reverent and pristine. When you take a collection of songs that have only existed in your head, in a studio and on a record out onto the road, do they go through a toughening up process when conditions aren’t ideal? (Loud bar, equipment struggles, etc.)

OF: I think the ARTIST goes through the “toughening up” process haha. But no, seriously, I’ll do a sort of meditation when conditions are tough live. I just tell myself that the performance is my way of trying to give something back to the universe — whether anyone is listening or not. So, I want to honor that and keep my focus on the songs. I’m not one for pitching fits on stage, but I know Nina Simone did it all the time and she’s a total badass, so I’m not judging either ;).

For more on Fink’s recent work, you can listen to our review of Blue Dream and an interview with Fink near the time of its release.