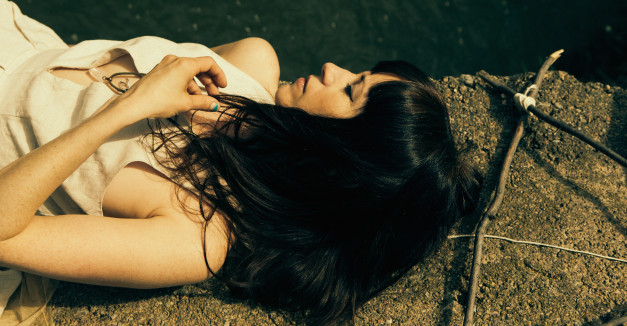 On Blue Dream, Orenda Fink feels either lost or found, depending on how you look at it.

The wisdom she attempts to impart comes from either deep within the listener’s own subconscious or far without, from the collective consciousness. But either could also be both.

If there are any conclusions to be drawn from Blue Dream’s ambient ruminations on love and death (but not so much life or birth, as one might assume), they might be as cyclical as the album itself. In the same way that album opener “Ace of Cups” slips intimately, discreetly into “You Can Be Loved,” and then almost imperceptibly into “This is a Part of Something Greater,” Fink’s resolution is tenuous and unobtrusive: death is a part of love is a part of death. Everything is everything.

In surrounding press, the album has been framed by the narrative of Fink’s relationship to her dog, her dog’s passing and how she came to terms with the loss of a meaningful relationship. Yet on Blue Dream, there’s nothing so specific, lyrically. The general reflections on the nature of death certainly apply to meaningful relationships, but it could be a mother-daughter relationship, two best friends, siblings, a romance and mother nature.

In that, Blue Dream is indeed like a dream (not to mention the syrupy-thick production work thanks, in part, to  producer Ben Brodin). Surreal, yet vague, imagery abounds, almost as a template the listener may use to frame whatever mortal coil has been hanging her up lately.

Largely, Fink’s fourth solo effort, and eighth album including her work with Azure Ray and O+S, serves an experiential listen before a critical one. Blue Dream’s aphorisms are less like a puzzle to be pieced together or a paper crane to be folded and unfolded, and more like a honey-warm pool in which we’re invited to fully emerge.

Blue Dream is out now on Saddle Creek Records.