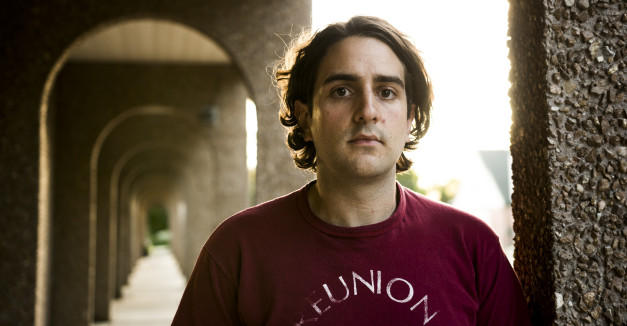 A choice lyric at the beginning of Oquoa’s 2014 self-titled record signals Max Holmquist has taken a hard creative turn from the folk projects of his past.

In a singing voice deeper and more braying than anything on South of Lincoln and The Great American Desert, Holmquist cries on “Move Your Bodies”: “Mr. Kaufman informs me/we’re all performing/all of the time.”

It’s the sort of moment that — in addition to the basin of watery rock around you — implies a paradigm shift, venturing away from roots music convention into gently shaded rock music.

With an Omaha cast of players that’s resembled a Nebraska music supergroup, Holmquist’s songs are as fit for imagery as they are references to the creative process. Even the name Oquoa, which Holmquist told us when the band played its first show in the summer 2013, could be seen as a reference to band-building. A band needs a name. And that’s as abstract and arbitrary a concept as anything.

But that’s not to color Oquoa as a difficult, nervously aware art-piece. Much of the band’s first, and only, album settles on grooves and large, sloping, intuitive melodies. The songs seem to grow from a place of mood and of bandship, sounding composed by a group of people committed to writing not so much just nominally together, as off each other’s skills, sensibilities and influences.

The group has been through some lineup changes since recording that record though, losing JJ Idt and Jim Schroeder at different times, and adding Cursive’s Patrick Newberry and bassist Michael Overfield. Holmquist and Good Life/Conduits drummer Roger Lewis have been the constants.

You can see Oquoa this Saturday at Reverb Lounge with Noah’s Ark Was a Spaceship and Geoff Dolce. RSVP here.