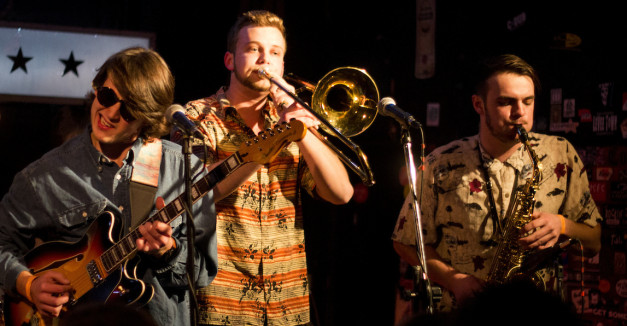 We catch Oketo at an odd spot in their lifespan tonight.

On the one hand, nominally speaking, they’re a two-month old band just a handful of weeks away from the release of their debut EP.

And on the other, you’d know them historically as Jeazlepeats, a moniker that’s been around since 2009, though only two of their six members can really speak to the past identity of that band.

If you listen to the Jeazlepeats’ self-titled 2013 EP, you hear something with a Fleet Foxes choral lift to it, and a kind of Aqualung drapery over a real taste for the riffs on which entire songs are built. It’ll all fairly melancholic, as well.

It’s only in the recent history of the band — this year — that they’d become go-to acts for New Year’s Eve celebrations and pool parties with the introduction of saxophone and trombone into the band. So while they’ve been performing live at Lincoln Exposed and the Amizade Music & Arts Festival, what Oketo really sounds like — recording to listener — remains to be seen. We’ll see how close we get tonight at the band joins us in the studio for an acoustic set.

You can see them Friday night at The Bourbon at the Flippin’ Awesome Fundraiser for KZUM, along with Handsomer Jaws, Amateur Geologists and Meadow Rave. But right now they are with us live. Ladies and gentlemen, take a listen to Oketo.