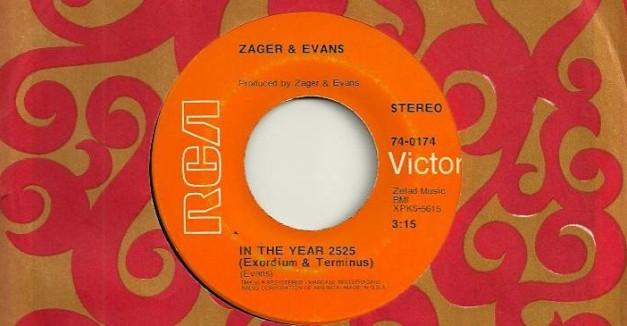 [Editor’s Note: This column reflects on the late ’60s pop hit “In The Year 2525” by Nebraska natives Denny Zager and Rick Evans. So far as we know, Denny Zager builds custom guitars at Zager Guitars in Lincoln. He couldn’t be reached for an interview. Chelsea Schlevert Yates has previously written the Liner Notes series for Hear Nebraska. Reach her at chelseadyates@gmail.com.]

1969 was a monumental year for science, technology and popular music. The U.S. sent nine flights into space, the most significant being Apollo 11, which landed on the moon on July 20. A few weeks later, NASA’s Mariner 7 beamed photos of Mars to Earth as it flew 2,200 miles above the Red Planet’s surface. Back home, the first successful in vitro fertilization of a human egg was performed, and ARPAnet — the foundation for the Internet — transmitted its first computer-to-computer message.

Two major concerts — famous for very distinct reasons — were held that year: Woodstock, the transformative three-day music festival celebrating peace and love, and the Altamont Free Festival, at which a fan was stabbed to death by members of the Hells Angels biker gang hired to provide event security. The Beatles gave their final public performance atop the Apple Records building, and John Lennon and Yoko Ono initiated their anti-war “bed-in” protests. Led Zeppelin I and II, Johnny Cash’s At San Quentin, The Who’s Tommy, Dylan’s Nashville Skyline, Let It Bleed by the Rolling Stones, the Beatles’ Abbey Road and self-titled albums by the Velvet Underground, Townes Van Zandt, Neil Young and the Stooges are just a handful of the notable records released in 1969. Elvis Presley performed live for the first time in eight years, and David Bowie broke into the mainstream with “Space Oddity,” introducing listeners to the strange and haunting tale of Major Tom.

And that same year, a song by Denny Zager and Rick Evans — two folk musicians from Lincoln, Nebraska — held the number one spot on the American Billboard charts for six weeks. A curious blend of sci-fi and rock & roll, their song “In the Year 2525 (Exordium & Terminus)” transported listeners 10,000 years into the future. Take a listen, for the first time, or maybe for the 500th time.

Zager and Evans met in Lincoln at Nebraska Wesleyan University in the early 1960s. Shortly thereafter, they started playing together in the Eccentrics, a group often heralded as one Nebraska’s first great rock bands and recognized for their sharp vocal skills and big bouffant hairdos. Evans wrote “In the Year 2525” in 1964; however, the song wasn’t performed until 1968. By then Zager and Evans were playing in the Lincoln area as a duo, and they borrowed $500 to record the song at a small studio in Odessa, Texas. For the recording they were backed by fellow Nebraskans Mark Dalton on bass and Dave Tripp on drums. “In the Year 2525” was originally released on a small regional label, Truth Records. Zager and Evans shared copies with Lincoln area deejays and, thanks to supportive regional airplay, quickly sold 11,000 records. The sales caught the attention of national recording labels, and the duo signed with RCA Records to release an album nationwide the following year. It sold over 1 million copies within two months, propelling “In the Year 2525” to the top of the charts.

It’s crazy to think that a song with such an apocalyptic message was the big summer hit of 1969 (for some context, other number ones that year included the Archies’ “Sugar, Sugar” and “Aquarius/Let the Sun Shine in” by the 5th Dimension). More fascinating is that it entered the charts the week before Apollo 11 landed, topped at number one while Neil Armstrong and Buzz Aldren took their small steps and big leaps, and held that slot as Mariner 7 soared by Mars. Why was it so popular? Were folks craving a healthy dose of science fiction on the airwaves? Was it just a catchy pop tune? Or did people connect with the song on a deeper level?

1969 wasn’t that long ago, but to some of us it may seem as far away as 2525. The U.S. was in the middle of the Cold War with the U.S.S.R. and a literal war in Vietnam. By that year nearly 60,000 U.S. soldiers had been killed in Vietnam and more than 150,000 wounded. Although the U.S. and the U.S.S.R. never fought each other directly, they sure prepared as if they might. The world had not seen such significant growth in the development of weapons of mass destruction as it did in the 1950s and 60s. The two countries raced to assert themselves as the dominant global power: Who was the most technologically innovative? Who had the strongest military? Who could stockpile the most nuclear arms? Who could get to space first?

The threat of nuclear warfare existed in Americans’ everyday consciousness during this time. In the 1950s — when Zager and Evans would have been kids — many public schools held “duck and cover” drills, preparing students for what to do in case of a nuclear attack. The U.S. government urged Americans to report anyone — neighbors, teachers, co-workers or relatives — suspected of communist behavior to the authorities. And as Zager, Evans and others of their generation became teenagers, young men were required to join the armed forces and fight in Vietnam through selective service, also known as the draft. I’m sure I sound naïve, but this is a world completely foreign to me, even though it was less than 50 years ago.

But this was the world in which Zager and Evans grew up. It’s no wonder Evans penned such a bleak outlook on the future.

Every day, scientists learn more about our expanding universe, using telescopes and the light of distant worlds to discover exoplanets and galaxies far beyond our reach. They collide subatomic particles in the hopes of revealing the tiniest bits of matter in existence. Researchers find alternative sources of energy and cures for diseases. Technological developments have paved the way for advancement in nearly every aspect of our lives. They allow us to do more, know more, travel further distances, live longer, and save time and money. Technology is miraculous for sure. But it’s a benefit that’s also a liability, and with the good sometimes comes the bad.

This is what Zager and Evans want us to think about. Throughout “In the Year 2525,” the progression of time and technology runs parallel to the demise of humanity; this theme is reflected in the song’s structure as well as its narrative. Anxious strumming yields a fast, nervous rhythm that propels the tune ahead. Ominous lyrics carry the story, and as each verse travels further into time, the song creeps up the musical scale, changing keys and growing increasingly foreboding and dismal.

Zager and Evans tell us that pills will control our thoughts and actions. We’ll no longer rely our bodies for movement or physical experiences; machines will do the work of our arms and legs. Since we’ll select our offspring from glass tubes, we’ll have no need for human interaction or intimacy. Technology — our very own creation — will dehumanize us to a point of no return. We’ll deplete all our planet’s resources as well, consuming “everything this old earth can give” and not giving anything in return. And as the song fades out, we realize that, just as quickly as it began, we’ve reached the end. It’s a point at which we’ve destroyed ourselves and our world with our own innovation.

While we can’t predict the future, we know there is an element of truth in Zager and Evans’ song. Advances in technology often have undesirable side effects: global warming, pollution, deforestation, to name just a few from the long and heartbreaking list of ways that human activity has changed the earth. The United Nations predicts that world population will grow from its current 7 billion to 16 billion by 2100 (four centuries before the year in which Zager and Evans start their song). That’s pretty mind-blowing, considering it wasn’t until the 1800s that the global population reached 1 billion. We’ve affected this planet more than any other species in its 4.5 billion year history, and we continue to do so at an alarming rate.

It seems Zager and Evans do not have faith that we’ll set a different course for the future. Or do they? One of the final stanzas of “In the Year 2525” prompts me to rethink this song whenever I hear it. In this verse, the duo break tempo, nearly slowing to a stop. We hear only these words:

Now it’s been ten thousand years,
Man has cried a billion tears,
For what, he never knew,
Now man’s reign is through,
But through eternal night,
The twinkling of starlight
So very far away,
Maybe it’s only yesterday.

What’s happening in these last few lines? Are Zager and Evans giving us a glimmer of hope, hinting that there’s a chance of starting over—at the possibility of rebirth, whether spiritual or cosmic? Perhaps this pause has been inserted to remind us that we are part of something beyond our comprehension and control; by forcing us to slow down, the duo provide us with momentary awareness. But almost as quickly as they introduce this notion, they pick up speed and return the song to its original tempo. It’s as if this transition back is intended to mirror the unavoidable quickening pace of technology, our reliance on it and our inability to take time to consider its outcomes. And by the end we are left alone to ponder: What is it all about?

We don’t know how far into the future humanity will exist or what that existence will be like. Have we done more harm to the earth than good? Will our advancements also be our downfall? Is there time to turn the situation around, and are we even capable of doing so? These are the questions that Zager and Evans posed in the ’60s, and they still resonate today. We’ll likely never know the answers, at least not in our lifetime. I just hope that, for as long as possible, there are musicians who continue to encourage us to consider our actions and embrace the very brief time we are given on this planet we call home.