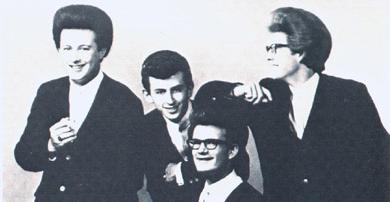 It's easy to toss this song off as a Frankie Valli and the Four Seasons rip-off. I mean, these vocal groups were all the rage at the time. But two particular members should be of some importance to those of us who grew up with '60s radio – Denny Zager and Rick Evans.

They, of course, went on to fame under the startingly original band name Zager & Evans, who released the 1969 number one hit “In the Year 2525,” an Apocalyptic paeon to the dangers of technology which was much more effective than, say, Ted Kaczinksi.

“Share Me” didn't go far beyond the regional. However, the single itself is a wonderful slice of '60s Nebraska, small town bands mingling with Linoma hotshots. This Lincoln group may serve now as a footnote (and a Nebraska Rock 'n' Roll Hall of Fame inductee,) but this song was a moment in time – of a trending style, both musically and fashion-wise. And it birthed one of the biggest successes out of Nebraska, for the time.