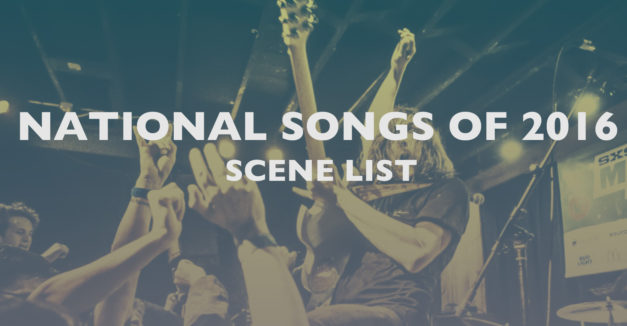 To help assess the year in music, we asked dozens of musicians, journalists and scene figures for their favorite albums, songs, shows and events of the year. The first one, on national albums, published yesterday; read it here, and check back each day over the next few weeks for more reflections and predictions.

Below, our year-end contributors name their favorite songs of 2016, including some big names in pop and hip-hop, a few long-awaited releases and nods to a departed star.

“Self Control” by Frank Ocean. “Keep a place for me/I’ll sleep between ya’ll/it’s no thing.” Devastating. Oh, and the last minute and a half … yikes. I die.

This is a really tough one for me to answer, but I think it has to be “Bob Dylan’s Grandma” by Diarrhea Planet. I just relate to this fast-paced, fun rock and roll song on such a primordial level. Diarrhea Planet is ear-porn for anyone into an excessive amount of guitars (I saw them twice live this year) but behind all of that noise and distortion is some really good writing and musicianship. “Bob Dylan’s Grandma” is punchy, thematic, raucous at times and pretty at others. It features this awesome hook, complex guitar layering and plain-and-simple great lyrics: “It had been my dream, to race F1 or fly F-16s. I’ve got the next best thing, to cut my teeth on these six strings.”

“No More Parties in LA” by Kanye and Kendrick Lamar. I’m an unapologetic Kanye fanboy and I have really mixed feelings about The Life of Pablo. But “No More Parties” is a great song for driving around and for some reason that really matters to me.

“Cranes In The Sky” by Solange Knowles

Comrades put out their newest full length record Lone/Grey this year and the song “Underground Queen” stuck out to me. Ben and Laura’s vocals on this song are perfect. If you like slightly aggressive post – rock, this is definitely the record to check out. They also have been playing Nebraska for about 4-5 years and you can definitely expect them here again soon!

“Blackstar.” I mean, it’s just incredible. The video, too.

“Blackstar” by David Bowie. Officially released last year, but it became the defining moment of 2016 and it’s stunning and wonderful. Seeing Stephen Sheehan go off script at the Bennie and the Gents tribute to Bowie and do a verse of this song was the closure I needed on his passing.

I feel like bringing up Fullbloods again. My favorite song on [Mild West] is “Winter Coat.” I like slow jams and it hits that part of me that adores R&B. I think this might be the one recording where Ross [Brown] played everything. Geez, will you cut it out, Ross? I get it, you’re good at everything.

If I had to pick one though, I’d choose “Ceremonies” by Strange Relations. I feel like I could listen to and go yeah, “This came out in 2016. What a great year of disillusionment.”

Either “Same Drugs” off the Chance the Rapper album, or “Pushing Time” from Miranda Lambert. They were my calm down tracks. Both are beautifully produced, delicate tracks with no-fuss vocal deliveries.

“Formation” by Beyoncé. I don’t think I’ve ever had more conversations with more people about a single album than I have had about Lemonade. I’ve loved the discussions it’s commanded about race, feminism, pop music and art, beginning mere moments after it dropped in April. For me, “Formation” encapsulates what Lemonade is all about. The second Beyoncé marched upon the field during the Super Bowl 2016 half-time show to perform this song, pop music shifted—as if the tectonic plates on which it’s existed suddenly rumbled against each other, disrupting ideas about who pop stars should be and who their music should be for. You can’t nod your head or hum along to “Formation” without acknowledging that yes, Black Lives Do Matter—especially Black Women’s Lives. Looking ahead, we’re gonna need all the voices we can get to ensure this truth remains at the front line of our embattled collective consciousness.

I know this band is super huge, or whatever, but my kids really like Twenty One Pilots,  so we listen to a lot of that band in my house. They have a song called “Ride”,  that just makes me smile whenever I hear it.  It makes me think of summer and being young…like when I was a high school kid.  Plus, it’s got a chill poppy ska/reggae/dub vibe.

Teenage Fanclub‘s song “Thin Air” was my absolute favorite song of 2016. I’ve been a Teenage Fanclub fan for a while and I love how they refuse to stick to one sound on their records. “Thin Air” has a wonderful rock-and-roll, but the vocals, especially the refrain, which boasts some beautiful harmony. Overall, the album is beautiful, but this song in particular stuck out to me and I replayed it over and over again in my apartment and my car. It may be my neighbors’ least favorite song of 2016 now.

The track “Tea Leaves” by Baltimore artist :3lON has been consistently in my brain all year. It is off their incredible Ronin EP.

“Nobody Speak” by DJ Shadow ft. Run the Jewels. I think the music video speaks for itself.

“Nas Album Done” by Dj Khaled and Nas. To me, a top tier emcee like has to go beast mode on a Khaled track. The beat was hot and Nas is still one the best to do it. He blended old school with new school. We need more balance in music.

SIRES, an Iowa-based pop rock band has a real banger of a song I’ve listened to over a hundred times since I saw them perform at 80/35 in Des Moines this year. “She’s Into Me” is a straightforward yet rhythmically interesting song about a girl. It will liven up any party, and it’s a blast to hear it live.

Two of my all-time favorites, Gillian Welch and John Prine, put out new releases of not-new material this year. Welch’s 20-year-anniversary release of demos and outtakes from the album Revival is a great collection. The song “Dry Town” is twenty years old but new to me, is my favorite.

If I had to pick a song, I would say “Overcome” By Laura Mvula. That song has literally been on repeat for me. I love it! Listen to it! There is literally no reason not to love it.

“Freedom” by Beyonce feat. Kendrick Lamar. You know that scene in Kill Bill 2 where Master Pai Mei asks The Bride what she’s going to do when an enemy is three inches away from her, will she turn into a ball or will she put her fist through him? Then The Bride starts punching away at that board from three inches away until she can literally punch so acutely strong that she can punch straight through the coffin she’s been stranded in and all the ground she’s buried under to save her kid? Fuck. I’m no Beyonce, and I know this song isn’t for me, but I think this is Beyonce having punched so acutely strong that she’s punching straight through the coffin, the ground, and goddamn Bill himself. Knocked the wind right outta me, that’s for sure.