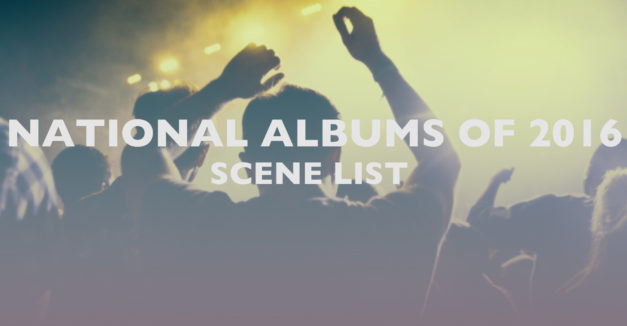 To help assess the year in music, we asked dozens of musicians, journalists and scene figures for their favorite albums, songs, shows and events of the year. Check back each day over the next few weeks for more reflections and predictions.

Below, you’ll find an eclectic scene take on national albums of the year, including a pair of beloved songwriters, a few usual indie suspects, a handful of R&B and everything in between.

David Bowie, Black Star: Buddhists talk a lot about emptiness; not emptiness as in nothingness but emptiness as in openness, expansiveness. Individuals do not have singular, permanent, fixed identities but instead are ever-evolving. We are born, we live, we die, we return to the universe from which we became. Nothing exists in itself; everything is interconnected. Life and death, darkness and light, wisdom and naïvety are dualistic concepts we rely on to make sense of our complicated existence. Bowie’s final gift, Black Star, asks us to consider life and art beyond such dualities. It’s a collection of songs that resides outside of the world we know, like its creator always did.

This is a tough one, but I’m going with Leonard Cohen’s You Want It Darker. I don’t think it’s his best work, but several listens in and I find myself haunted by what is essentially his death rattle… that seems harsh, but you read about how immobilized and ill he was toward the end, he basically sat in an orthopedic chair to sing the songs, but singing those songs was what made him feel alive again at the end. I’m not crying, YOU’RE crying!

Freetown Sound by Blood Orange. It’s the most interesting, innovative, real album I’ve heard in years. 100-plus listens and I’m ready to play it again.

To Be Everywhere Is To Be Nowhere by Thrice. It brings me back to sounds that I heard when I was younger.  I also had a very personal experience during their live show at Slowdown, and I’ll have a special connection with that band & record as a result.

Tough one. For me, it’s You are Going to Hate This by The Frights. Zac Carper of FIDLAR took the raw talent of San Diego’s The Frights from what was lo-fi catchy surf to bonafide garage-surf-punk. The album is so well produced and strings together a really potent cocktail of sonic forces to create raucous music that backs up Mikey’s propensity for great melodies. Every song is great — especially “Kids” – and really resonates with any coming-of-age 20-something.

Untitled Unmastered by Kendrick Lamar. Kendrick seems to know what risks to make as an artist.

Mat Kerekes put out his first full length record in 2016. It’s an album you can listen to front to back, packed full of great hooks and the production is spotless.

On sheer number of listens, Coloring Book by Chance the Rapper probably wins out. There are a lot of albums I’d like to mention (Young Thug, Leonard Cohen, Angel Olsen), but Coloring Book really lived in my head for like six months this year. I think I was struck by its exuberance in a year that, for a lot of people, didn’t leave much room for that feeling.

(They also had a video premier on Adult Swim)

This band in Kansas City called Fullbloods that put out their latest and third album at the beginning of the year called Mild West, on High Dive Records. Ross might be one of the most talented people I’ve ever met. This album stopped me dead in my tracks and I was in awe of it. I felt defeated, a little jealous, but mostly felt like dancing.

The Definition of by Fantasia – If James Brown and Aretha Franklin had a child – it would be Fantasia. They is so much grit in her music that you not only feel her pain you can taste, smell it and any other sense you make have. Dope artist!

PUP’s The Dream is Over was so phenomenal, and I totally needed those angry Canadians this year.

Pup’s The Dream is Over. Everything about this band is just so amazing. Their video for “Sleep In the Heat” brought tears to my eyes, and I don’t even like dogs.

I’ve been a fan of Nahko & Medicine for the People for awhile, so I was pretty excited for their new album, Hoka, released in May. With Nahko’s insightful, cultured lyrics and talented band members, this band has a positive message during a trying time for the world, while at the same being realistic, which can be difficult. “Hoka” has a unique blend of alternative rock, reggae and some hip-hop. It is probably best described as world music. It’s also a nice progression from the group’s first two albums. “Tus Pies” is my favorite song from the album and one of my favorites of 2016.

I’m really not sure. Lorenzo Senni‘s, Persona EP is definitely up there. I also really enjoyed Prime Example by Atlanta band Hellier Ulysses. It is a near perfect musical expression that balances attraction and dissonance on a knife’s edge.

Towards the beginning of the year, Mary Lawson of Mesonjixx and I traded names of musicians we were listening to and she suggested I check out Margaret Glaspy. I admit it took me forever to get to it, but I took a chance on her Tiny Desk Concert and immediately dove in the deep end. Emotions and Math is and album full of vividly written torch songs that presents as soulful, sincere, sentimental, gutsy, gritty, and a number of seemingly contradictory things that come together to produce an almost psychoactive effect. Punchy guitar riffs dot vocal acrobatics you can almost feel jumping out of the speakers.

Tobacco‘s Sweatbox Dynasty. I like sounds and music that make me turn my sideways like a confused dog. Tobacco/BMSR always does that to me.

Blonde by Frank Ocean. Have you heard that ish?!

Sturgill Simpson‘s A Sailors Guide to Earth is one of the most innovative albums I’ve heard in a long time. The recent outlaw country king took a left turn with an album of beautiful life lessons aimed at his recently born son. It’s full of brass, dynamic range, emotions, and love. I can’t drive and listen to the song “Welcome to Earth (Pollywog)” because I inevitably burst into a combination of sad and joyous tears at the song’s climax.

Malibu by Anderson .Paak. A friend recommended this one to me while we were watching the final game of the World Series, back when we were living in another country.

There were a ton of really incredible records that came out this year but I would have to say Going By by Told Slant was my personal favorite. After seeing them play Milk Run this year I just couldn’t stop listening to them and when Going By was released a few weeks later it quickly became my most listened to album of the year. Also have to give some honorable mentions to Gleemer and Shura for their releases this year because goddamn.

Laura Mvula‘s Dreaming Room. This Woman. Is. PHENOMENAL. One of my inspirations. Very artistic. A beautiful vocalist and lyricist as well. Also! Kendrick Lamar’s To Pimp a Butterfly. Beck was great too!

Leonard Cohen‘s last album, You Want It Darker, has to take the top spot. I have a long and storied history with Cohen’s songwriting, starting from when I was 14 and heard “Suzanne” for the first time. Cohen’s songs transcended words and were so emotionally jarring for me that I felt such a connection. Beginning with the title track, the entire album plays out like a 9-song dirge that Cohen wrote to himself. Much like Bowie’s amazing Blackstar, You Want It Darker is a brilliant way to cap off a brilliant career and is another beautifully crafted set of songs for me to remember Cohen.