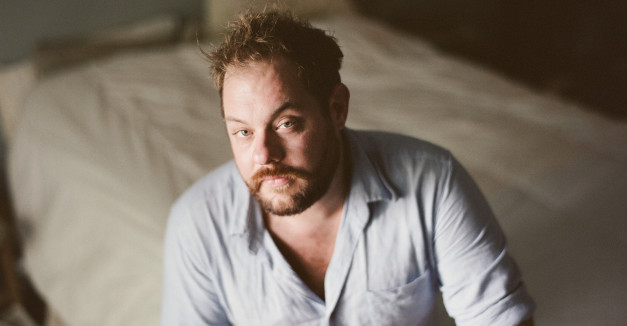 But before he undertook the job as part AV Club’s Undercover series — and to nice effect, by the way, with harmonies and Rateliff’s lippy baritone pumping out a feeling of paternal storytelling — Rateliff said his first experience with the song many years before was one of humor: “We thought it was hilarious.”

There’s no denying the humor in John Darnielle’s unabashed lyrical overstatements, but a resonance for this sect of Satan-dropping song comes from misunderstandings and restrictions in Rateliff’s own upbringing. Raised Chrisitian in rural Missouri, he remembers being in the car with his father, bargaining for whether the Christian metal band Believer was approved listening.

“And [my dad] would be like, ‘What is this demonic crap?”‘ Rateliff remembers. “And I’d be like, ‘Dad, they’re screaming scripture basically.'”

From a few years later, the now-Colorado-based songwriter recalls a feeling of euphoria and danger surrounding classic rock discoveries like Black Sabbath and Led Zeppelin. Rateliff once even hid with a friend and absorbed Led Zeppelin IV on tape in age of parental backmasking paranoia.

“It’s funny to look at sometimes how adults take things so literally and overlook the things that were important, like teenagers who actually needed help,” Rateliff says on the phone, laughing and then becoming more serious about the era. “How poorly you’re treating your kids, but [instead] you’re telling them they can’t listen to this kind of music. You need to hang out with them!”

Rateliff’s own contemplative music, though, seems an unlikely candidate to grab hold of either spiritual or demonic imagery. Dogma and the dark pageantry alike might betray Rateliff’s boot-strap folk, which you can find on two albums and brand new EP (out this month). He’ll play solo tonight at The Waiting Room with Gregory Alan Isakov. The show is sold out.

While his work is routinely tagged as “honest,” Rateliff estimates this has more to do with how he carries himself than the songs touting any objective truth.

“Hopefully, they’re not trying to say Nathaniel is a liar,” he jokes about the writers of the “honest” label. “I think I’m a pretty straightforward individual. Approach each song and even my performances to be what I actually feel, for it not to be a show. This is a craft. No crocodile tears.”

And if the stage is rubbing him the wrong way on a particular night, well, there’s a kind of honesty for that, too.

“True to the space I’m in, when I’m playing … lackluster sometimes, if I’m not feeling up to it, then it’s like, ‘Well you can go fuck yourselves.’ I’ve made jokes like that on stage about only playing James Taylor songs for the rest of my set. Shit like that.”

It’s this personal candor that saw critics admiring Rateliff’s last solo album, Falling Faster Than You Can Run, for its naked portrayal of struggles with alcohol and touring alone. That admiration also reached to the newfound sense of touch in Rateliff’s music, a voice that could stretch into crooning territory and the advent of clarinets, horns and some jazz chords. Now, with new music coming out, Rateliff notes the bygone album was just an album, not necessarily a personal tune-up.

“As far as topically, I still struggle with the same things,” he says. “Drinking is always a hard thing in this industry. Seems like one of those things people end up quitting for once they get older. I don’t really think the album helped me fix anything.”

Was it supposed to?

“I don’t know. Sometimes when you write about something, you have a realization and you feel like you can move on from that. But it’s too easy to get stuck.”

With truckdriving, gardening and woodwork in Rateliff’s arsenal of vocations and hobbies, the music still has some heavy lifting to do.