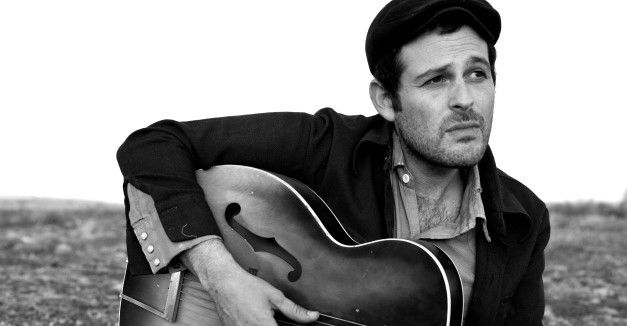 You could go by Google relevance, Spotify plays, applause volume at any of his shows between Colorado and Central Europe, and you’d probably glean Gregory Alan Isakov’s two most beloved songs are “Big Black Car” and “The Stable Song.”

They’re coming up on their fifth and seventh birthdays, respectively, heralded into their touring middle age by the feeling of leisurely and stringy peace that beds Gregory Alan Isakov songs. His most recent album, 2013’s The Weatherman, is the same way. Coming off as sure-footed tales from a patient father, the singer raising his voice to a breaking point is out of the question. The music fits the neo-folk bill, but without any fireworks and, in many cases, even choruses at all. It may invite banjo, bass and fiddle into the fold, but only in hushed service to the living words. Like, say, “Love was a country we couldn’t defend” in the case of “Big Black Car,” but you could find as quiet and winning a line in any of his 40 other recorded songs.

But what carries the songs from town to town without any weariness is Isakov’s own feeling that he doesn’t need to pack them in his bag each time. Nor does he need to check if they still hold water or represent the writer. He’s fond of saying “The Stable Song” is just a “poem about everything.”

“I’m in this co-creation thing with the song,” he says. “[During the writing], I’m just hoping it gets done this week or this year or this decade. That’s my favorite part … working with this living thing … songs really are alive.”

Isakov plays Thursday night at The Waiting Room with Nathaniel Rateliff. The show is sold out. You can buy Isakov’s albums here.

As Omaha is the first stop on Isakov’s tour, we caught him on the phone from his home in Boulder, Colo., to chat about why his songs become like old photographs and for an update on his list of banned songwriting words.

Hear Nebraska: I saw your cover of “The Trapeze Swinger” the other day, which was lovely by the way…

HN: How long did it take you to get the lyrics down?

GAI: I loved that song for a long time. I heard it ten years ago or something. It always made me stop.

HN: But it got me thinking, what do you think your wordiest song is? I think “Stable Song” or “San Francisco” might be the longest …

GAI: I have this song “3 a.m.” that I wrote on the way home from the studio. I was finishing up the first record and I sort of just pulled over and wrote the song. I was sort of mixing in my truck, a little Toyota, a pick-up. The record kind of called for a rambly, wordy song. I don’t play it too often, but when I do, I really have to go there in my mind so I can remember every word.

HN: Did it kind of come out all at once?

GAI: Yeah it did. Some of them do.

HN: ‘Cause when I think of “Trapeze Swinger,” I think of Sam Beam writing it all and then falling down and napping for years.

GAI: I remember that, I was in a parking lot.

HN: And so I was going back and reading that, and I think The Weatherman had just come out. You were talking about the record that you worked on and then threw away to make The Weatherman. You said you could kind of see if things want “to be alive or not.” Thinking back, that was such an interesting way to talk about songs, as though they have their own agency. Why is it important for you to treat songs like little beings, like that?

GAI: I do think that. I’m wary of any artist — or I’d be speculative — if someone said, “I have a finger on the whole thing.” Or “I know how the whole thing works.” In my experience, I start out with a seed or a melody or a line and then I’m in this co-creation thing with the song. And then I’m just hoping it gets done this week or this year or this decade. That’s my favorite part … working with this living thing … songs really are alive. And that’s why we’ve been playing songs on stage for five years and they never feel old to me.

HN: Is there an actual feeling that if you had too much of an ego or too much of an agenda, does that throw off the balance of the song getting to decide if it wants to come to fruition or not?

GAI: There is definitely work ethic you need for sure. There’s definitely a punch-in. You gotta try, you gotta play.

But there’s moments like on the last record I have this song called “Dandelion Wine.” And there’s this part where I’m like, [singing softly] “Summer days are just a magazine, magazine” … every time I would pick up the guitar I’d get to that part and it was just empty. So I kept coming to check in with it every day, every other day. Six months later: [singing again] … “the fall swoon left me…” It took that long for it to come, but I definitely wanted it.

HN: You just kept knocking on the door until it answered.

HN: You talk all the time how a little mystery in the process is important to you and how some of your favorite songs still seem mysterious. Are there any songs in your discography where you look back and they seem odd? Like a stranger might’ve written them?

GAI: I feel that way, in a way, about all of them. I feel like there’s this moment that happens and it’s super intimate. And then it’s like you hit ‘record’ or send the masters off and there’s this weird thing that happens like these aren’t yours anymore. Like I’m covering them or something. Like I’m looking at an old photograph. That’s me, but I’m different now.

HN: What do you recollect about “John Brown’s Body”? That’s an old song and it’s really nice, but I don’t think there are any songs so riffy or dark or playing with tradition like that in your recent work.

GAI: To me, that was always a song that recorded well and I never moved to play it out much. There’s a lot of songs like that, that work well one-on-one with the listener and other songs that work to a room of people. It’s weird how that happens. That one was always … I was almost whispering it to someone.

HN: It’s interesting you say that, ’cause it sounds like it’s done on a very tight soundstage, very lo-fi.

HN: And then a new I wanted to ask about was “The Universe.” It doesn’t sound like a song that could have fit on the older albums. So many — in my listen — have so much to say about physical spaces and analog objects.

GAI: I think we go through these periods of time and curiosities of writing. You’re always trying to open up new territory. Records are so thematic. On that first record, I was drawing from Celtic-y, Irish-y, and bucolic writing. And I dove in deep there. And then with Empty Northern, it was way more landscape-y. And with Weatherman it was a lot more spacious. I think I get into these curiosities and really try and stay there.

HN: So my organization writes all about Nebraska music. I was just thinking looking at Saddle Creek artists, like Bright Eyes and Cursive and The Faint, they all seem to write from a place of stress. And that doesn’t seem to be your music at all. Have you ever written a song from a place of real discomfort?

GAI: You know, I think they all do. And then there’s an element of the song teaching you something in the process. I think they all start out that way for me. And then a good song, when it works, is when it takes you somewhere and you’re a little bit different when the song is over. Once in a while, we all get lucky. But you’re always after that.

HN: When I think about how peaceful your work seems to be, I wonder if part of it comes from the fact that when you sing you don’t open your mouth very wide.

GAI: [Laughs]. I never look at myself when I sing.

HN: What vocalists do you remember admiring when you were just starting to sing?

GAI: I always loved Jolie Holland … Eddie Vedder. Tool and Soundgarden. It was so different from what I did, but I loved the sound of it.

HN: This was just picking up on something we talked about last time — were there any new words that have made it on the list of words you’re not gonna use in songs anymore?

GAI: At all. Let’s just take a break from that one for a little while. [Laughs.]

HN: Do you still have a physical list or is it all in your head now?

GAI: It’s in my head, but I’ve got the actual list somewhere.