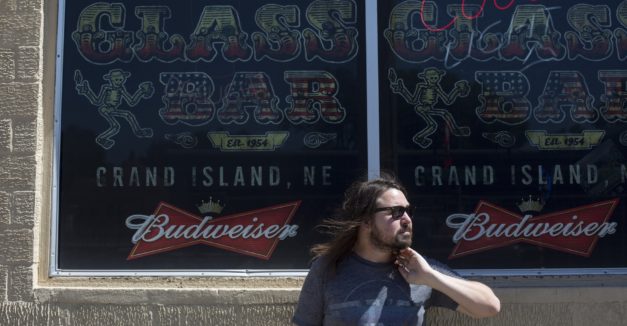 After all, the freelance designer grew up here and has spent much of his life returning to Grand Island from the West Coast to spend time with family. He’s a Grand Island regular, a Glass Bar regular.

“This is Grand Island’s world famous dive,” Roe says as a means of welcome as we enter the bar. He’s back in town again, working and looking after his nephews.

“Dive” is apt in the most affable sense. It’s adjacent to the railroad tracks that bisect Grand Island and to buildings that may or may not be in use. The neighborhood is populated by low slung houses with curbless yards.

Glass Bar is colored by decades of grime, stickers, table carvings, vintage beer taps and dancing skeletons that might be iconic if the bar was, as the cartoons claim, world famous. On an oppressively muggy afternoon, the cool, dark indoors and cheap beer are a welcome reprieve. In one corner, the preteen son of the owner helps mop the floor. 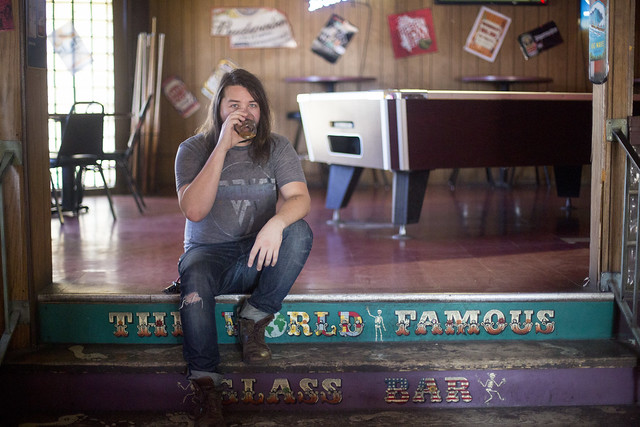 Occasionally, Glass Bar hosts bands and open mics. It’s one of a few spots in town equipped for it, but even here, the son running the mop wouldn’t be able to attend. Anymore, there are no all ages show spaces in Grand Island. Roe sees that fact as a problem, squandering the creative potential of Grand Island’s youth and, in turn, hindering its arts scene.

Grand Island is the state’s fourth largest city at 50,000 people. Almost 13,000 of those residents are under the age of 18, and currently without a place to regularly see live music.

With touring musician parents who played together while he was young, Roe developed a penchant for music as early as he can remember. As soon as he could haul gear, he says, he was playing roadie for their shows. Naturally, he started playing music himself as a teenager. Soon enough, with a few original songs under his band’s belt, they had to find a place to play.

Ask a scene-devoted Lincoln or Omaha musician where they saw their favorite local bands as a teen and you’re like to hear at least one of these: Box Awesome, the University of Nebraska-Lincoln’s multicultural center, Cog Factory, Ranch Bowl. (Box Awesome was the last of those all-ages venues to remain operational, closing in 2009.) In Grand Island there was The Ramp, a downtown skate shop with a small quarter-pipe and a PA. Roe hung out there, played there and eventually ran the place for a couple years in the late ’90s.

“I would look up bands on tour and see if they had a day off between like Chicago and Denver and get them to come here,” Roe says. “It didn’t matter who they were. Whatever bands that wanted to play could just play.”

He notably remembers bringing The Faint to town in 1999, around the release of the band’s second record, Blank-Wave Arcade.

“Almost nobody had synthesizers back then,” he says. “It blew my mind.”

Eventually, after a series of code violations from the Grand Island police department, Roe moved to Lincoln to pursue his graphic design degree and work at The Chatterbox (which would later become Box Awesome). The Ramp closed in 2001, shortly after his departure.

For a while after, The Circle B, a dancehall in west Grand Island, hosted all-ages hardcore shows. Since it stopped having shows, outlets for young music fans in town have been few-and-far-between.

“Kids need some sort of thing,” Roe says. “You would think the adults, the parents would care. If there’s a parent looking at their kid thinking they’re growing up way too fast but not doing anything constructive, what kind of adult are they going to be?”

There is, however, reason for a renewed sense of optimism in Nebraska’s all-ages scene. While traditional venues have been largely non-existent in the last seven to 10 years, they are sprouting up again. In Omaha, Milk Run has quickly made an impressive name for itself by hosting a bevy of up-and-coming national acts that regularly pack its room. The Commons in Lincoln hosts the occasional band, and every show is open to all. At the end of June, The Bay skatepark in Lincoln held a music-filled, weekend-long blowout to celebrate the opening of its all-ages venue.

Still, in Grand Island, “there’s not as much of a push on creativity and the arts as there should be,” Roe says. 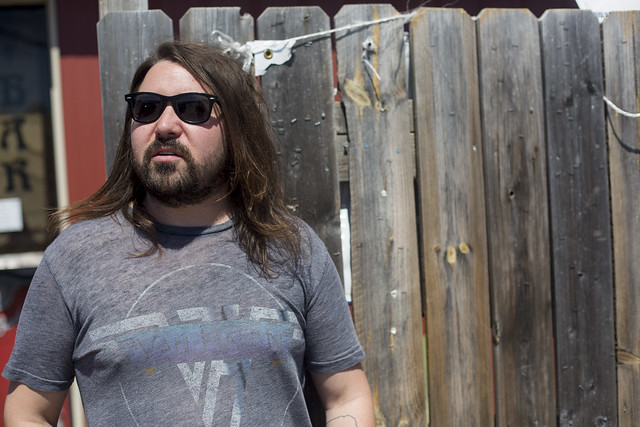 But there could be. If there is to be a third tour stop in Nebraska (after Omaha and Lincoln), this Interstate 80 town is perhaps best poised to fill the role. And Hear Grand Island (a Hear Nebraska-produced concert series) kicked off in June with a sizeable turnout each week.

Sharena Anson, who owns The Chocolate Bar in downtown Grand Island, says the concert series has proven the city is primed for quality events centered on the arts.

“I don’t think people realized how much local talent there is here,” she says. “The people are ready, the talent is here and it feels like the sky is the limit.”

“I care about what happens to the community here and there are people working on (the community) who actually give a shit,” Roe says. “This is a pretty solid, thriving community. People have jobs here, people can buy houses here.”

But, to foster a sense of vitality and creativity among Grand Island’s young people, he says, there needs to be a place for them to play music. The Ramp helped give Roe and others their start in the music industry.

Anson agrees. She says an all-ages venue would bring variety to the city’s music community and give young people a place to learn the craft and cut their teeth.

“Having a venue where all ages can come, that’s important for any music scene,” she says.

Roe says places like The Ramp can serve as a rallying point for constructive creative energy. “If kids don’t have that, what are they going to do? You can put a venue anywhere with a stage and a PA.”

It certainly doesn’t need to be fancy.