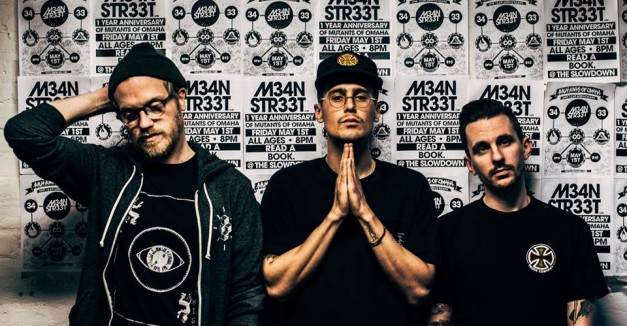 M34n Str33t producer Adam Haug (aka Haunted Gauntlet) describes the process of sampling deep-cut retro artists as if he were able to interact with them. In beefing up such lo-fi selections, the group pays homage while adding its own touch.

“It really feels like I am working with that source material in a new way, to make something new but also calling back to it,” Haug says.

During the one year span since debut LP Mutants of Omaha, the Omaha trio cemented its spot as a major player the city’s hip-hop scene and music scene at large. It took home Artist of the Year and Best Hip-Hop at the 2014 OEAA awards; it provided the soundtrack for University of Nebraska-Omaha’s men’s basketball and hockey teams; and played upwards of 25 shows on diverse national and local billings.

Hear Omaha is made possible by support from the Greater Omaha Chamber of Commerce and, this week, SecretPenguin.

We caught up with Haug in advance of the show. In our Q&A, he discusses his penchant for soul music sampling, plans for the future and M34n Str33t’s persistent emblazoning of Scottie Pippen on albums, posters and videos.

Hear Nebraska: What is it about early- and mid- 20th century soul that lends itself so well to sampling?

Adam Haug: There is an element of exploration and finding hidden treasure when looking through old tracks and audio sources for samples for new compositions. In some of the older genres, like doo-wop and golden oldies, there is still a lot of tunes I still have not heard, or that have been lost in the crates and caverns of time. Those songs are mostly lo-fi and missing low end and strong beats, so when I put modern drum samples and bass and production on a section of those arrangements, it really feels like I am working with that source material in a new way, to make something new but also calling back to it because typically it’s a melody or rhythm that I find attractive to my selection aesthetic. We have no limitations on what can be sampled in this project, I just like the feels of the older stuff, could be the ghost of nostalgia that I dig.

HN: The remixes you released for Mutants’ one-year anniversary were all pretty flattering and playful with the originals in their own ways, but which one surprised you most when you first heard it, and why?

AH: I like when producers contribute and get involved period. That is what surprises me most … beat makers getting active and I commend them all equally for doing their own thing with our source material.

HN: We kinda can’t believe we’ve never asked this, but why Scottie Pippen? The song, the branding, all of it. (Other than him being the all-time best supporting cast member on an NBA team.)

AH: We use a lot of semiology, iconography and metaphor in our art. “I wrote this one for Scottie Pippen’s Right Knee,” is the first line of rap on the last song on our album. Scottie Pippen, of course, is the underdog shadow of Michael Jordan. [His] jersey number is 33.

Also, I’ve written this before about the numbers: “The name M34N STR33T started off conceptually as a play on the mathematical golden mean/ratio which I was studying heavily in college which has historically been used as an aesthetic tool for beauty in art and design, which is my major at UNO.

Coming from the middle of the map and from the middle of our city, aka Midtown Omaha, the word “Mean” started to have a lot of simultaneous “meanings.” It meant the average, the middle ground where all things clashed together which reflects our collaged, time bending style of production/beats. It is also a reference to Malcom X’s quote “by any means necessary,” so originally we almost chose the name “the means.” The numbers 34 and 33 represent many things for me personally: the digits to my phone number and my age during the release of the music. The album was all recorded DIY on 33rd and 34th Street and the street that connects the two here in Midtown, which also is the home to Mutual of Omaha, the largest building in our cities’ skyline and a symbol of power and wealth amongst many other things corporate.

The numbers in the spelling is what is called Leet (or “1337” or leet-speak, which is a reference to the internet and our generation that grew up with technology, hacking and online gaming. Did we mention we have a video game?). We are primarily electronic band so it is fitting.

Oh, there is also a great film called Mean Streets by [Martin] Scorsese that has a killer oldies soundtrack. We sample a ton of music from the 50’s/60’s as well as that movie, because it has many parallels to our own lives. Soon you start seeing sixes, sevens, 33s and 34s everywhere- it’s all in good fun.

HN: On April Fools Day, we exposed your shameful and unrelenting guac demands. But, for real, if M34n Str33t had a real rider at a touring venue, what’s the one thing each of you would want on it?

AH: Whatever is the best local pizza in town and Maker’s Mark on the rocks.

DJ Really Real: Six-pack of tall boys, hot sausage pizza, a chicken burrito and hot wings and … maybe some Pepto for after.

AH: Solo records from Conchance and Haunted Gauntlet. Building the new M34N STR33T record is in [progress], as well. We are taking time finding a new sound and bringing it next level. We don’t want to make the same album again, so expect something similar … [that] utilizes everything we have learned over the last few years playing live and recording together.