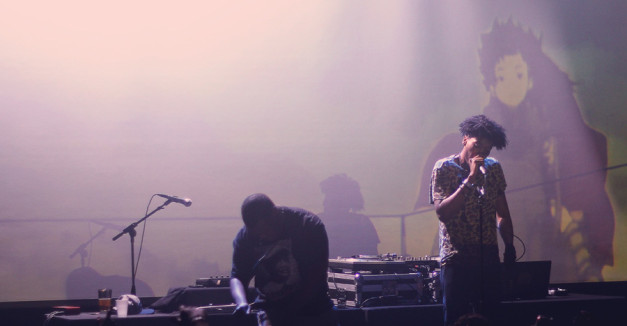 Tonight’s performance goes out to the self-proclaimed weird kids.

It’s one of the things the Omaha hip-hop duo, Both, seems most eager to say about itself, but it’s also a hallmark of their music. The duo, which comprises emcee Scky Rei and producer INFNTLP, released its debut LP earlier this spring.

It’s an album that feels a bit like a hospital patient in control of their own morphine dosage. It flies upward and the album relaxes, with INFNTLP providing something akin to beautiful elevator music, while Scky Rei’s slow growl turns into a drawl.

But Both always comes back to earth and it often does so with a crash, anxious sorts of narcotic withdrawal, as with the song “Alterhof.” That point on the album feels like a kind of climactic soul-bearing from Scky Rei, too suddenly nervous and empowered to be veiled anymore.

And so while if you put Both on in the background while running around your house, you might return and say, “It was weird! What a lot of odd noises and images!” But a closer listen reveals something that’s both near the aesthetic frontlines of alternative hip-hop movers and shakers, but also like a very internal and hazy struggle for self-assuredness.

Put one last way, what M34N STR33T did for joy and sheer style in Omaha hip-hop this year, Both is doing for derangement and derailment.

You can see Both on Wednesday with AZP as part of Hear Nebraska’s Live at Turner Park series in Omaha. But right now, you can hear them live on Hear Nebraska FM. Here is Both.