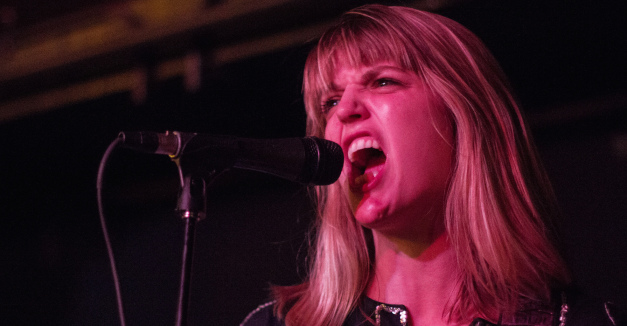 [Editor’s Note: Hear Nebraska will be covering Lincoln Calling throughout the week. Stay attuned to our Instagram for night-of updates. Find coverage of Wednesday’s performances below.]

You have to hope Churls never strays too far from house shows, porch jams and weird aesthetic choices. It would be a borderline bummer to see the Lincoln/Omaha acoustic pop band play a string of normal shows on normal stages, asking for a little more hand drum in the monitor.

So their decision to play un-mic’d from The Bourbon’s floor was both smart for them and a reminder that Lincoln Calling is at its best when it’s far more than a blur of bands filing on and off stages and playing their normal sets. Churls opened the X-Rated: Women In Music showcase sporting fur pelts, felt kimono robes and shiny spandex, embodying an ideal mix of warm-up and wake-up. 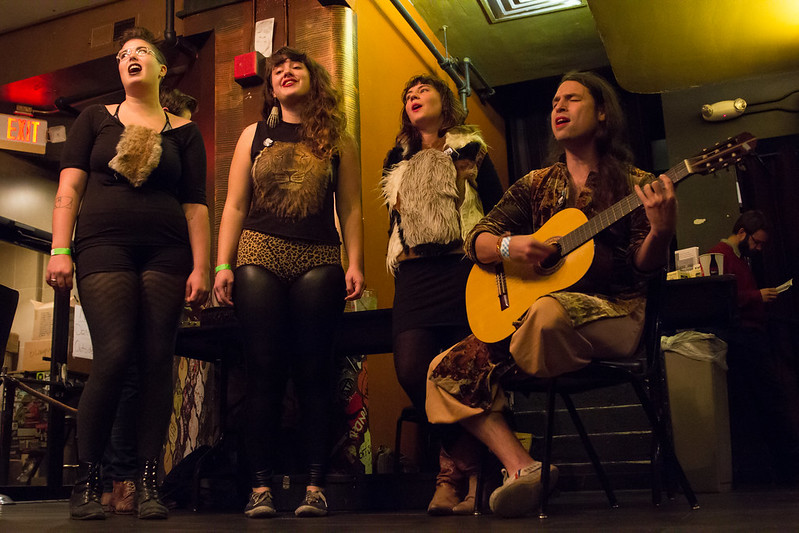 Unlike the layered, nearly spotless harmonies of Lars & Mal to follow, with Churls’ vocalists — anchored on this night by sisters Emily and Lisa Lux and Grant E. — the pleasure is in how exuberantly imperfect their voices are. While there’s a really keen ‘60s sensibility afoot in understanding of melodies and harmonies, Churls always stands out for its roughshod approach and its shrugging off of the official, whether that’s a lineup, a venue or plans to record. In keeping, it seems like the songs were arranged without much regard for the actual vocal ranges of the people involved, always teetering between octave switching and hitting falsettos quickly. But the melody and excitement dominate. 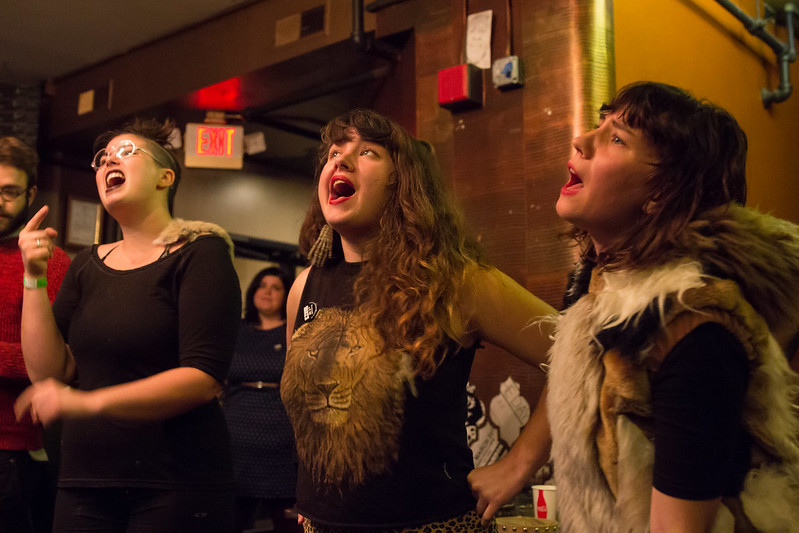 By the end of the set, the lines were entirely blurred between Churls and the floor-level, 35-person crowd. Emily Lux was jumping nearly a foot off the ground, calling out the asides of “People I Love.”

“I bet you think this song is about you … well it is!”

In reviewing Lars & Mal’s new album earlier this week, we touched on the unbridled sense of knowing within Mallory Finch’s lyricism. The songs are bold and open about both sex and sexuality, and complications of identity. In the podcast, we noted its freshness, which seemed inextricable from the fact that the words land in a woman’s songwriting voice. It’s not that men couldn’t write these plainspoken observations on how love grows, dies and confounds itself; it’s that, all-too-often, they don’t. 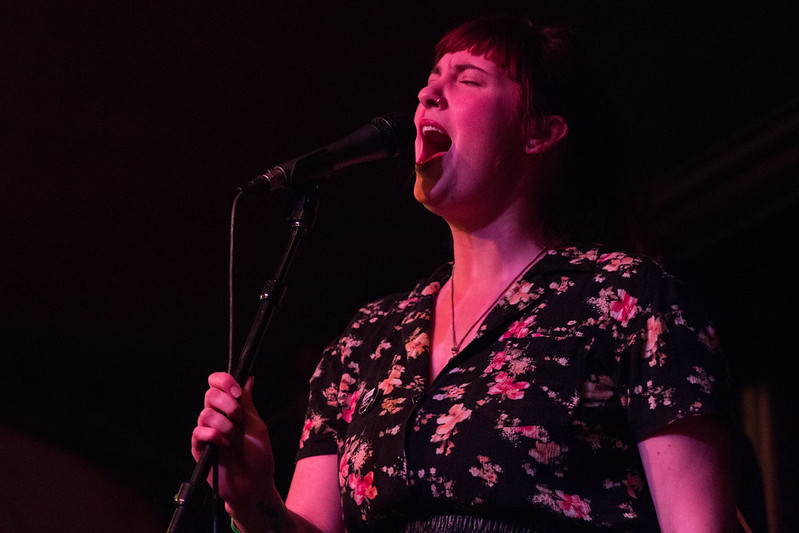 Wednesday night at the X-Rated: Women in Music showcase, the Bourbon crowd saw six solid bands. Some were constant and tight Nebraska performers, like Manic Pixie Dream Girls. Some felt charmingly new and underrehearsed, like Churls and Baberham Lincolns. In line with missions of X-Rated, The Bourbon was a necessary and supportive space to showcase what women are doing in Nebraska music. But even more? It was the place to hear the most vital human stories you may encounter in songs all festival long. Without posturing, without filtration and without tradition or form blocking the path of narrative and emotional immediacy.

Try and find a more candid summation of how relationships work than Churls’ “People I Love.”

During Manic Pixie Dream Girls’ Mari Matz’s introduction to the song “Anorexia,” she described being inspired, or seized, into writing the song when babysitting a 7-year-old who looked in the mirror and claimed she was fat.

The song both rages about and coldly mocks an epidemic societal issue with the chorus: “Girl, you ain’t a woman until you don’t eat.” 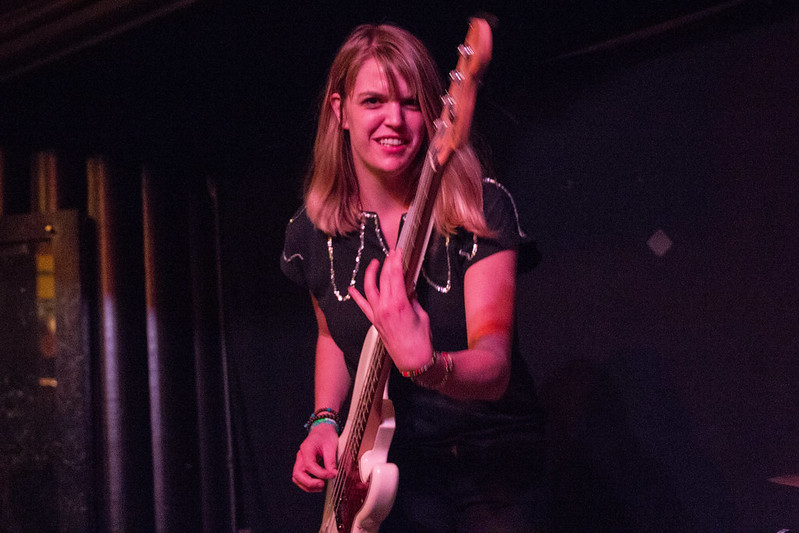 Even in the generally comedic Churls song “Pizza Store,” full of phallic humor — how much for extra sausage, that’s no banana in your pants — there’s a moment in which the Lux sisters scream, “I still testified he was asking for it!”

There’s a vibrancy to these songs because they’re responding to something real, topical and threatening, providing artistic perspective on what it is to be a woman — and better than that, a person navigating lives full of other people — in 2014. Cheers to X-Rated hosts Shannon Claire and Rachel West for providing a platform for those specific voices. It’s only too bad they’re not as universal as the lyrical voice of a man who wishes he lived in 1965.

When I see Domestica play at Duffy’s at 9 p.m. on the first night of Lincoln Calling, I think of The Millions. These two bands — Domestica, growing out of Mercy Rule — lived on the same alt-rock coin in the ‘90s. They both neared a national industry tipping point, but things didn’t pan out at that level. You can read all about the fascinating history here and here.

While The Millions disbanded and reunited a few times, Domestica has become a constant in the Lincoln scene, this endlessly and deservedly respected rock act that plays to 30-40 Lincolnites on the first night of the festival, with the same proud gusto they might wear for 300 people in an alternate universe where they made it big.

The flying voices of Jon Taylor and Heidi Ore are both risk-taking but feel smartly cared-for. Songs barrell out into the crowd as they nearly all begin with a quick electric guitar strum for four or eight bars before Ore’s bass and Pawl Tisdale’s clubbing drums take the song next-level. 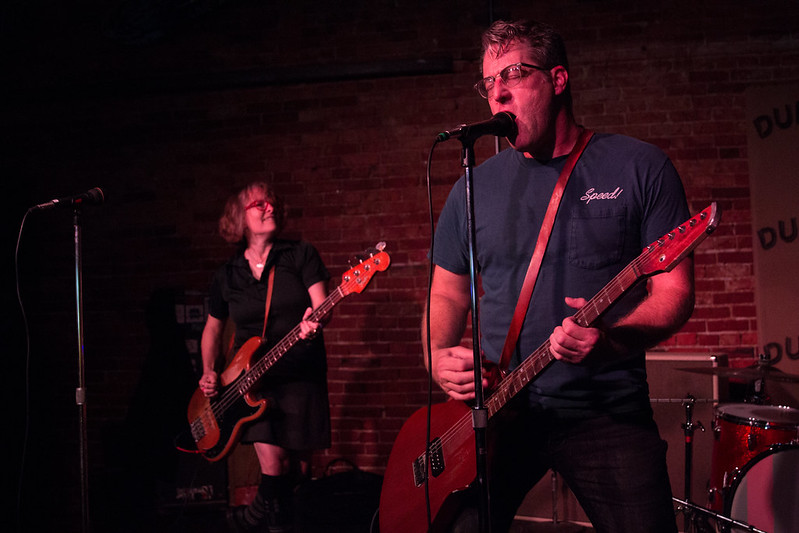 At the end, they play their last three strums like a short machine gun salvo and it’s quiet. Jon Taylor calls Duffy’s a “church of awesome.” Well, they’re the reverends.

The rest of the night, the act every succeeding band is most excited to thank onstage is Domestica. Put cynically, Domestica could still probably open Lincoln Calling for the next ten years if they gave 30 percent less of a damn. But they never, ever would.

While the Lincoln Calling concert goer can always expect to see a variety of acts, it’s likely that not many expected to leave the thrashing of Domestica or Laughing Falcon at Duffy’s or variety of the X-Rated: Women in Music showcase and stumble into a hazy den of reggae jams. On Wednesday night, those at the Zoo Bar received a double dose. In case you wondered if you really had wandered into a jam band music festival at, say, Sandstone Amphitheater, the bar counter could have been your totem.

Ro Hempel Band kept it low-key with a button-up reggae set that would have maxed out the jam-band bingo card: auxiliary percussion, brass, muted chords, wah pedals over lead guitar riffs, the (metaphorical) Bradley Nowell filter affixed to the microphone. 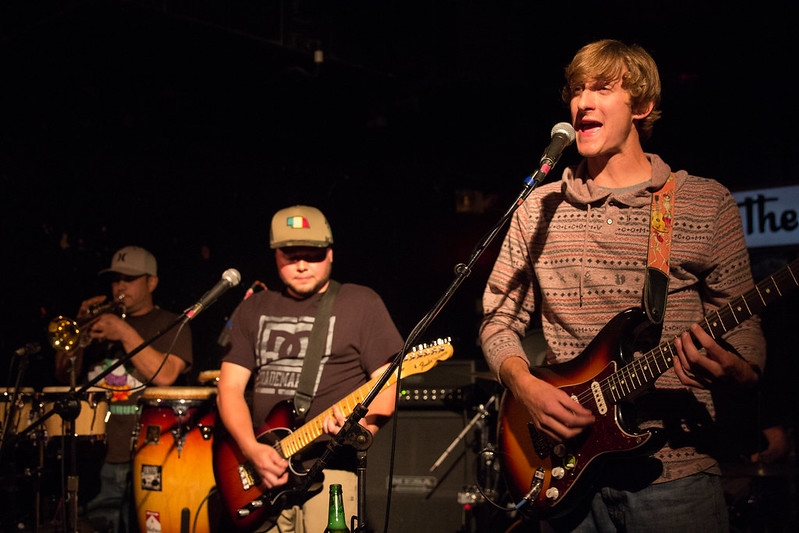 Eugene, Oregon’s Sol Seed, plucked their sound from the same Sublime field manual, but heavier guitars and rapping by multiple band members drove their sound forward with more intensity. Sol Seed even busted out a didgeridoo, as well as a straight-laced cover of “I Shot The Sheriff.” 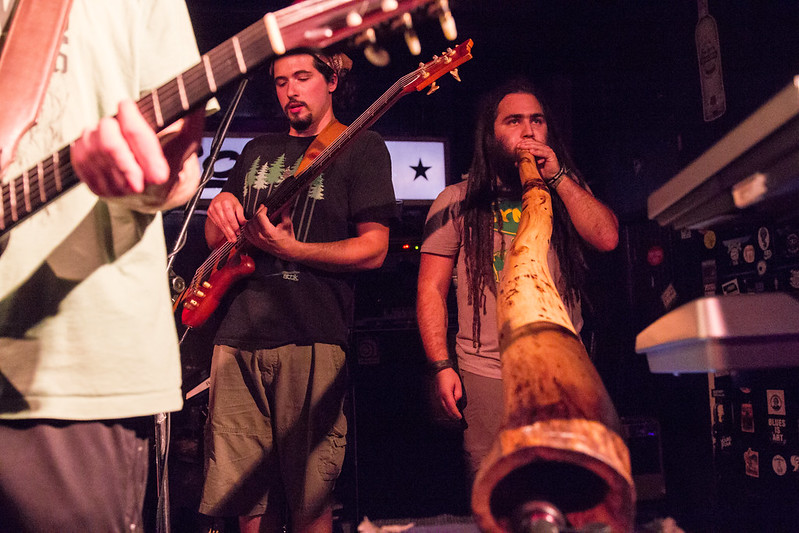 This is not to say that any college bum with an acoustic guitar and affinity for 311 could have jumped up on stage and hung. Both bands were crisp and tight, their skilled musicianship creating a laid-back experience, oddly complemented by the dimly lit venue.  But it was more like floating in a backyard pool on an innertube than driving through Long Beach with the top down.

“The deed to my heart is drawn but unsigned.” -Mallory Finch

It’s the closing line of Lars & Mal’s “Greatest Defense,” a flowy and melancholy pop song about unexplored forks in the road. Hard to say if anyone at The Bourbon fully caught it last night, but these songs are more than emotional; they’re crafted. Dive in here.

Kevin Chasek’s hard blues-rock band, Laughing Falcon, was dark and emphatic at Duffy’s Tavern, but a special nod is in order for Nathan Christiancy’s black leather drumming gloves. Whether for anti-sweat grip or style, it was probably the best example of minimalist badassery on Lincoln Calling’s first night. Couple that with theatrical drumming, and Christiancy looked like he was whipped awake for his fills, rolling his head around his shoulders with loose and limber arms. Brief drum corollary: Monica Maher (Manic Pixie Dream Girls) was also incredibly fun to watch, barely moving her head and shoulders while her arms attacked the kit like steam pistons. 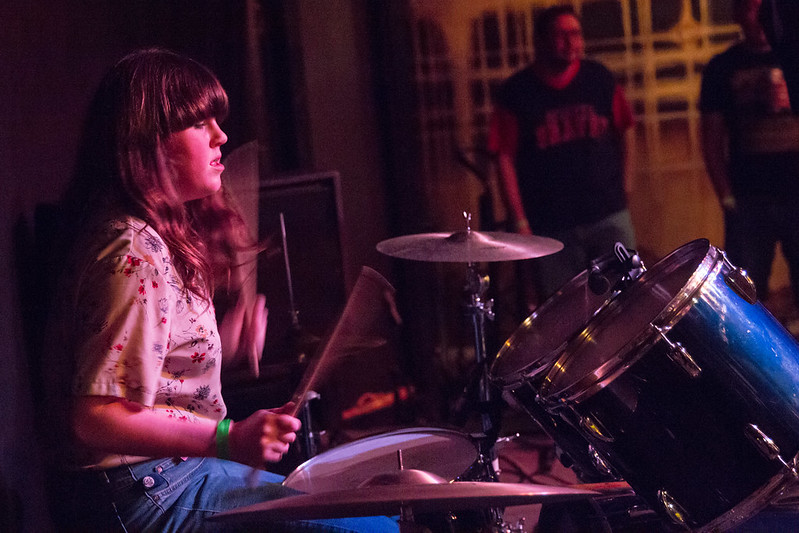 More photos of Wednesday’s Lincoln Calling by Will Stott 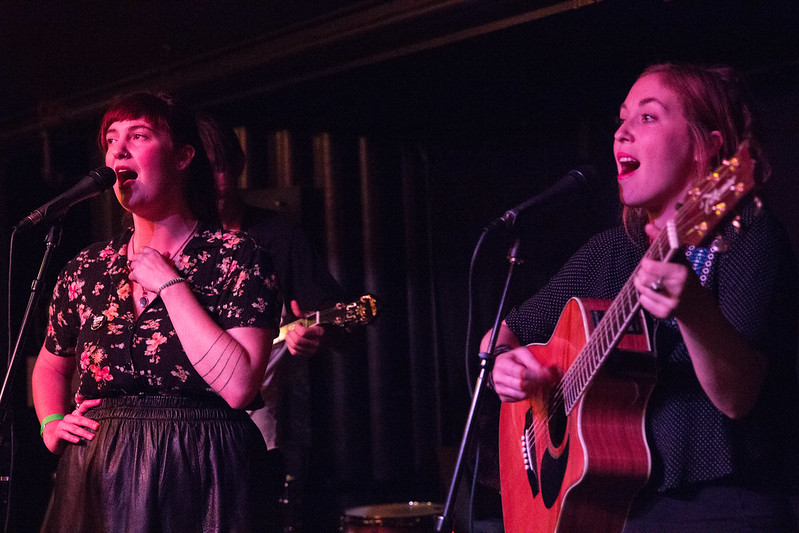 Lars & Mal at The Bourbon 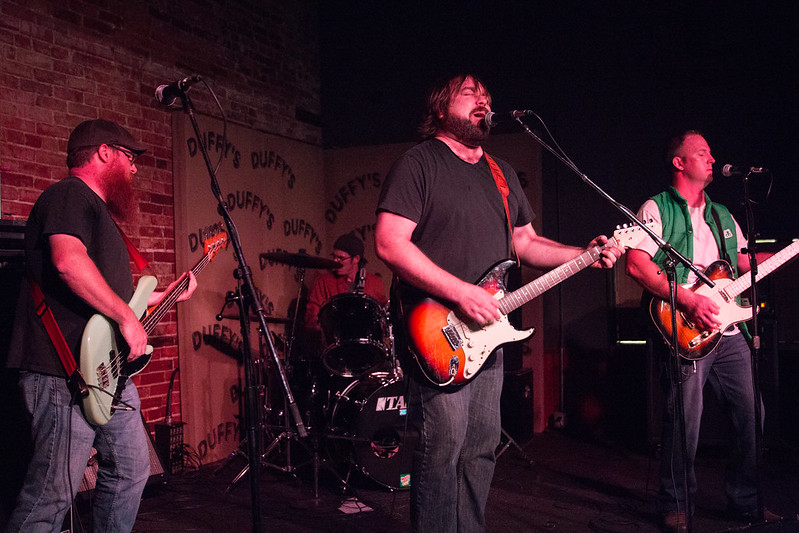 The Gov’t at Duffy’s Tavern 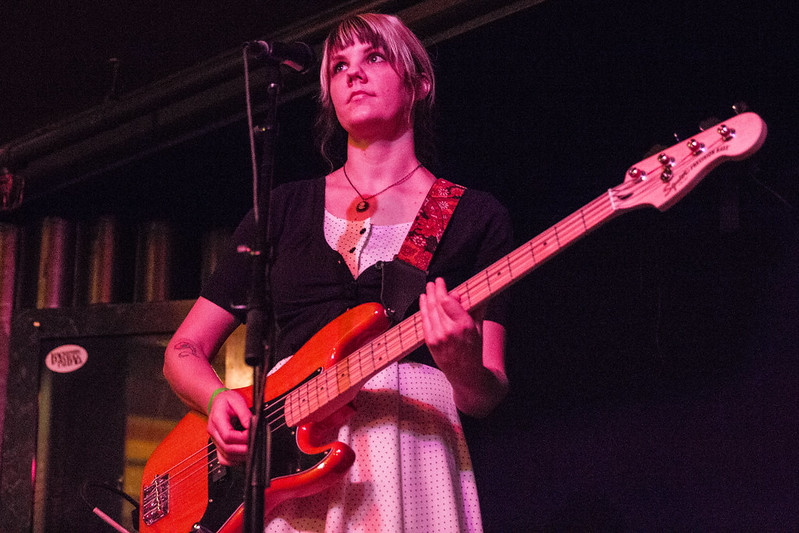 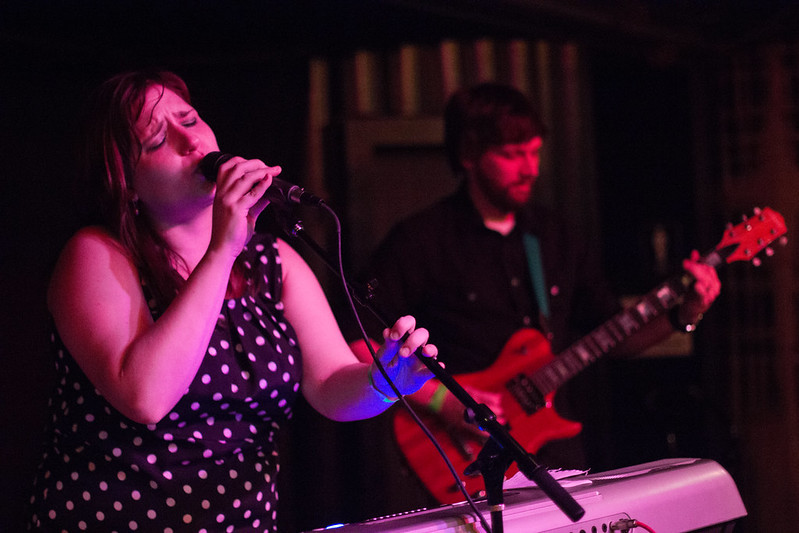 Glo Worm at The Bourbon 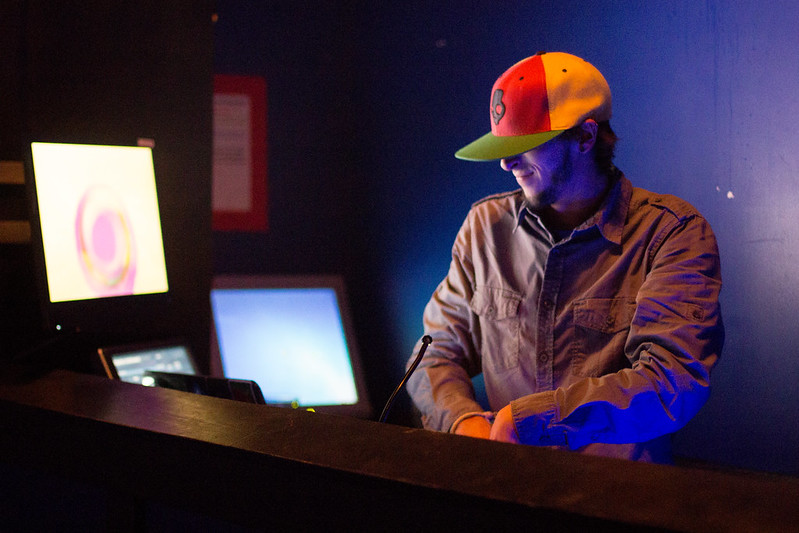 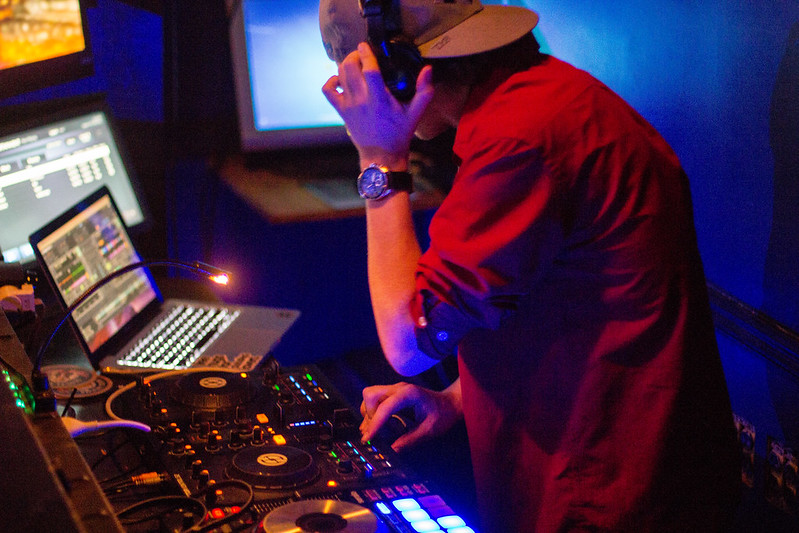 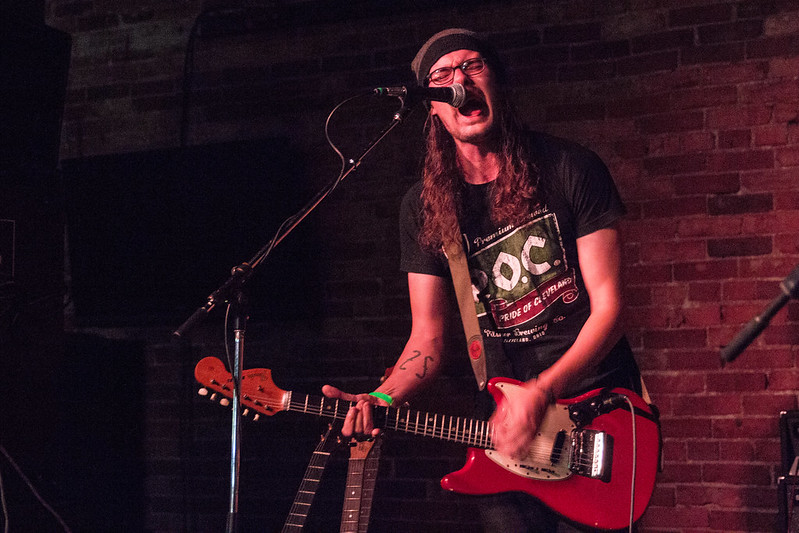 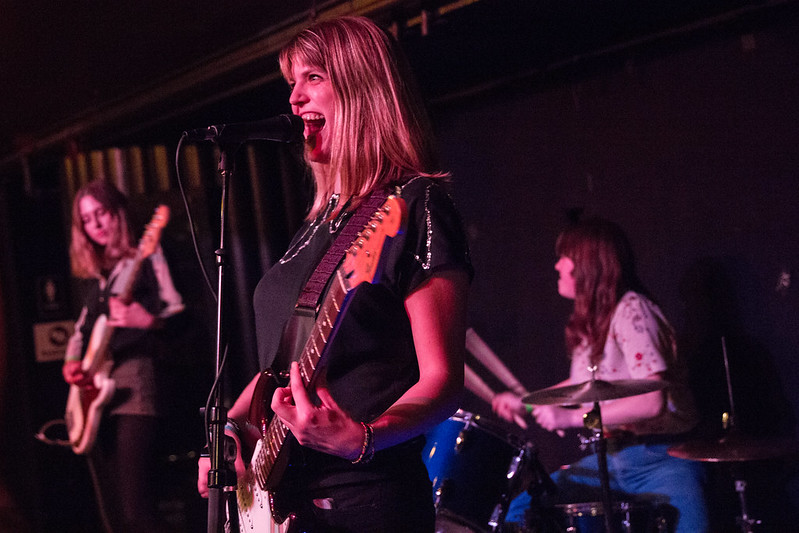 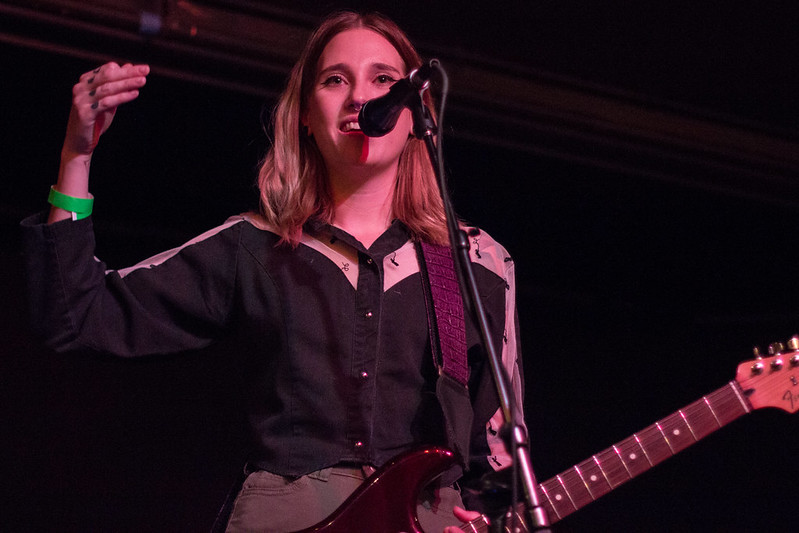 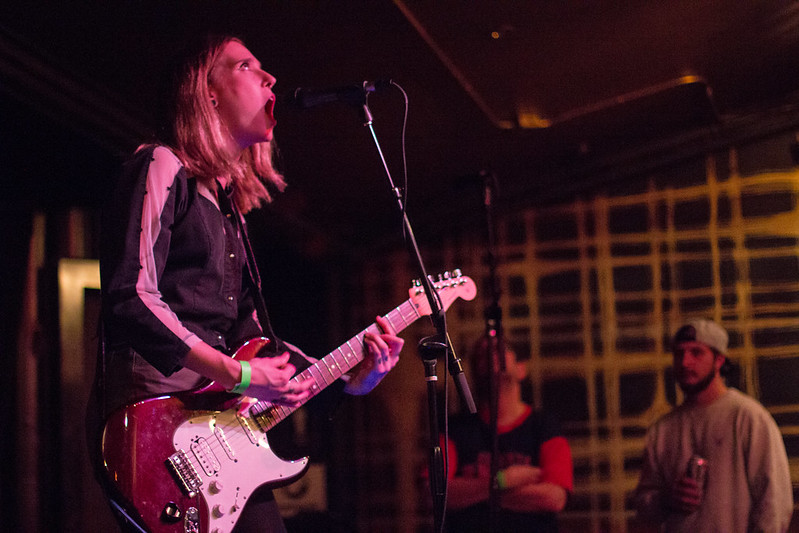